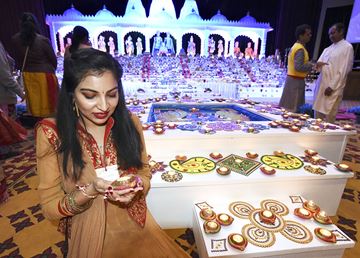 Priva Patel at the Diwali, Festival of Lights, event at the BAPS Shri Swaminararyan Mandir Monday. More then 16,000 people were expected through its doors offering vegetarian dishes that are artistically and elegantly arranged in front of God as an offering of thanksgiving. Oct. 31, 2016.

Diwali is the most widely celebrated Indian festival, according to BAPS officials.

“Diwali is called the Festival of Lights, symbolizing the victory of good over evil. It is a time to renew friendship, unity and harmony in the family and community,” explained a BAPS media release.

The colours, lights, sounds and tastes of the festival included ‘Annakut’, where hundreds of vegetarian dishes are artistically arranged in front of God as a thanksgiving offering.

BAPS is a worldwide religious and civic organization within the Swaminarayan branch of Hinduism.

Next year will mark the 10th anniversary of the BAPS Shri Swaminarayan Mandir which is located at 61 Claireville Dr. in North Etobicoke.