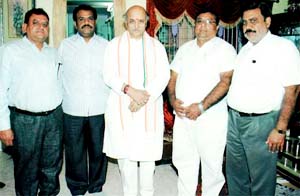 Deligates meet held with Vishwa Hindu Parishad, International working President Mr. Pravinbhai Togdiya for Hindus affected in Pakistan and delegations submitted by Kanwar Chawla and also matter discussed about Shri. Sudhamchand Chawla’s murder case. He also request him to solve the case quickly and arrest all the involved culprits as soon as possible for hearing and judgment by Pakistan court.

My Self Sudhamchand R. Chawla. I was borne in Haji city of Bluchastan state. I had come in Jacobabad of Sindh State in 1968 from Haji city. There I was admitted in Hamidiya High school where I found good unity among Hindu & Muslim people. We Hindu & Muslim participated in many social work together. It was that time when Zulf Ali Bhutto was the PM of Pakistan. He inspired us for save to the people, Hindu-Muslim unity. In this way I inspired form Bhutto and participated together with all students in Sindh Piples Students Federation. I was elected as president of this Federation and we did many socially desirable work

When govt. order to hang the Bhutto till the death. “Bhutto Bachav” moment get started and we excitingly participated in it. Govt. arrested many people during this moment and I was one of them. At last that black day came when Bhutto hanged till the death. Then General Zia was the PM of Pakistan who was Chief Air marshal. He passed an ordinance to start separate electorates system for Hindu minorities instead of point election. I decided that time, I will start the moment to protest against this ordinance. But due to Millitary regime in Pakistan, it was not possible to protest against the ordinance of Zia. We continued our Social work. Then I was appointed as a member of Municipal Corporation for two time. During my membership period I was served to the Hindu class people I said to my Hindu class people “Why shouldn’t we protest against being treated as fourth class citizens? Under the electorates system in Pakistan. Minorities including Hindus have a separate electorates. At that time all major decision of the Hindu class people were taken by Jakhrani Sardar. He illegally forced to Hindu people to act accordingly to his decision He was history sheeted criminal according to the police record. At last we succeed in our moment to awake the people from Jakhranis crime and first time Hindu class people appointed me as a president in Hindu Panchayat Hall. During my president ship. I emphasized on unity of Hindu & Muslim people. I served to Hindu class people.

Then I had decided to start moment against ordinance of General Zia. In Gotki districts meeting was called by Panchayat of Bluchastan Sindh and other states, where MRJ moment was made against the ordinance. In this meeting they elected me as a convener of the moment. Then offer we had called a big meeting in Jacobabad where reporter of BBC London and other reporter had called to get coverage of the meeting. In the meeting if was decided to boycott the local council electron.

Every Panchayat encouraged the men and women of hindu community to join the moment and they actively participated in hunger strike. This way in Pakistan’s history for the first time, women in large number were on hunger strike in Jacobabad city. BBC news channel has specially sent its editor for this event coverage and rest of news reporters also joined the same.Panchayati hunger strike meeting held in many different cities and govt.elections were strongly boycotted. Leaving entire hindu community and christian seats,all seats were empty. Barring these seats, Govt.did elections on rest of the seats. In that election, deputy district Nazim Ajaz Jakhrani and Town Nazim Jakhrani were elected in Jacobabad local govt.Soon after, they used to threaten me.They are interfering in the affairs of Hindu Genral Panchayat. Aijaz Jakharani Deputy District Nazim and Mumtaz Jakhrani Taluka Nazim of Jacobabd here got old enmity with me, they got robbed my shop in the year 1997 and such FIR was registered with the police, they now want to take revenge from me. Both Aijaz & Mumtaz Jakhrani now press me that I should tender resignation from the presidentship of Hindu Genral Panchayat Jacobabad. They intend that after my resignation I may be murdered. I am ready to make election of Hindu Genral Panchayat 99% people belonging to minority community are with me & they are fulfill with me. I am requesting to Sindh Government, Human rights, Cor. Commander, Sindh & others that to send your team or representatives to Jacobabad, in order to see my majorities & to see the interference of Jakhranies in the affairs of the Hindu Genral Panchayat. I am further requested to district administration be asked to stop interference of Jakhranies in the affairs of Hindu Genral Panchayat because they have got no concern with we minority people.

Kandh,Kot,Thul and Kahmore panchayat intervened, talked with DPO and decided to do re-election for Hindu Panchayat President ship. Election committee members were selected from Thul, Khand, Kot and Kashmore panchayat and they were given responsibility for the fair election.Jakhrani stood Dr.Hari Dass aginst me in the elections.Pressurised hindus for the win of Dr.Hari Dass. But I had a strong faith that Hindus will vote seeing my work and devotion towards them. After all elections took place and I got elected with 75% votes. After some time joint election’s efforts bore fruit and Mussharraf govt cancelled the ordinance of General Zia and announced joint election. We celebrated this with zeal and joy and also appealed hindu community to register their names in the voter list. Unfortunately one day, Jakhrani killed me. But he didn’t knew that from live Sudham Chand to dead Sudham Chand will bring him to the noose of death.