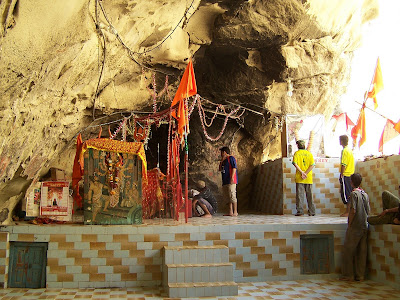 Islamabad : The chairman of the committee that manages the famous Hinglaj Mata temple in Balochistan province of southwest Pakistan has been kidnapped just two days before the beginning of the shrine’s annual pilgrimage, according to a media report on Monday.

Maharaj Ganga Ram Motiyani was abducted at Lasbela in Balochistan by two men in police uniform.

His followers organised a protest outside the Karachi Press Club on Sunday and demanded that the government take steps for his recovery.

“Motiyani’s kidnapping appears to be a conspiracy against Hindus since he was kidnapped two days before the gathering. He has not been kidnapped for ransom because he is a poor man,” Ramesh Kumar Vankwani, patron of the Pakistan Hindu Council and a former member of the Sindh Assembly, was quoted as saying by The Express Tribune daily.

Thousands of Hindus, including travellers from India [ Images ], visit the cave temple of Hinglaj Mata for a pilgrimage in April.

“We contacted the area police station within half an hour but he was not there,” Turshani said.

“When we spoke to Motiyani on his phone, he said that he was being taken to meet an army major,” Turshani alleged.

Motiyani’s family lost contact with him after an hour.

“The provincial and district governments have assured us that he will be rescued but we are clueless about why Motiyani was taken and what condition he is in,” said Turshani.