The presence of Mullah Abdul Salam Zaeef, one of the founding members of Taliban and once a close confidant of its former chief Mullah Mohammed Omar, in a function also attended by Union Finance Minister P Chidambaram in Goa on Sunday has created a flutter. The cyberspace was abuzz with netizens giving vent to their ire against the UPA Government after pictures of Chidambaram and Zaeef at the venue of the event went viral.
“Sushilkumar Shinde must have been busy at a music release function else he would have gone to welcome Mullah Zaeef at the airport,” said one Abhigyan on Twitter.
“How does this terrorist get Indian visa,” tweeted Sourabh Bharti. Officials of Ministry of Home Affairs, however, were tightlipped on the granting of visa to Zaeef, who is currently acting as Taliban’s contact point with the outside world. The Taliban leader delivered lectures at the Goa event on Saturday and Sunday.
Zaeef was a deputy Minister in the Taliban Government and was its Ambassador to Pakistan during the 9/11 attacks on the US. He was known for his vitriolic speeches in his Press conferences in Islamabad. After the US invaded Afghanistan and the Taliban lost power, he was captured in Pakistan in 2001. He was then sent to the infamous Guantanamo Bay prison where he was lodged till 2005.
Strangely, however, he later on managed to get off the list of terrorists prepared by the US. Intriguingly, Zaeef is said to have never apologised for his role in Taliban.

He was also not produced before any tribunal by the US forces. After landing back in Kabul, for several years he was under house arrest. Later, he emerged in the UAE and Saudi Arabia and was seen in several peace talks with the Western world and is still considered as Taliban’s ambassador. 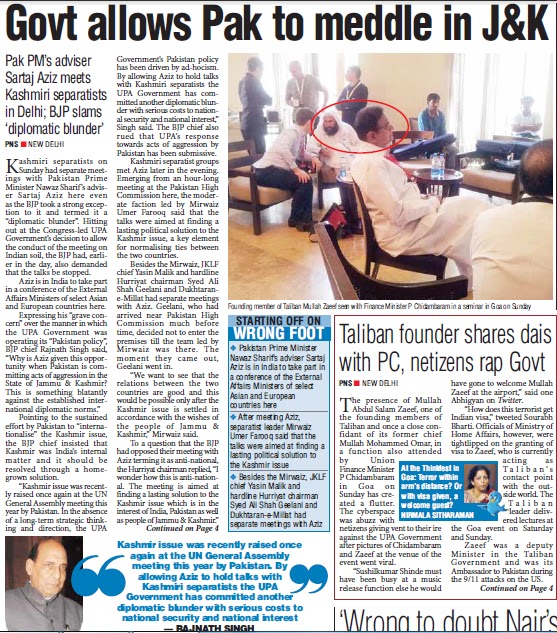