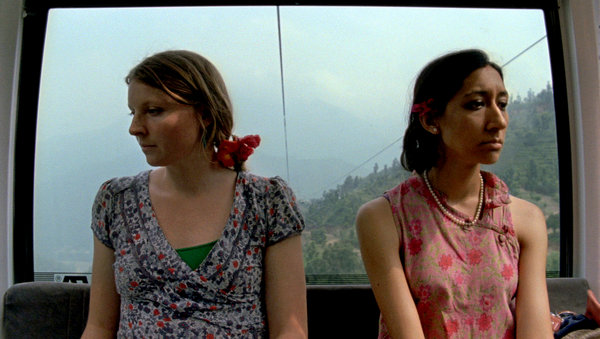 The faces in “Manakamana,” a transporting ethnographic film set in a green sliver of Nepal, stare into the camera, out into space and, perhaps, into the great beyond. The faces are sometimes creased and weathered, sometimes smooth as pebbles. A few look etched with worry, as if they were weighed down by a heavy burden, although they may also be seized with fear. That’s because for 10 or so minutes at a time, these faces are floating hundreds of feet above a lush Nepali forest in a cable car that takes pilgrims to and from the temple that gives this film its rhythmic title.

Located in the Gorkha district near the center of Nepal and close to the Chinese border, Manakamana is a temple of the Hindu goddess Durga, believed to have the power to fulfill wishes. There’s little available online in English about the temple other than the vaguely touristic, which ranges from the yawningly obvious (it’s a sacred site) to the hair-raising (it’s also a gory locale because of the animal sacrifices at the temple). Somewhat surprisingly, there’s also next to no information about it in “Manakamana,” which consists of 11 uncut shots — each 10 to 11 minutes long, or a 400-foot roll of 16-millimeter film — most taken in a closed cable car. The movie is being released digitally but its luxurious visual quality, with its near-tactile sense of texture and depth, owes much to it being shot on film.

All the shots begin and end with passengers clambering on and off a car in the near dark as the camera stays securely inside, the tripod fixed to a wooden base that the filmmakers had built. For about half the trips, the cars hypnotically move up and over the undulating forested mountain; for the other half, they move down. The men, women and children in the cars wear some traditional garments, although three longhaired male beauties pop up in T-shirts, the universal uniform of youth. Some passengers chat, others laugh, while still others sit in silence framed by the large window that turns the brilliant emerald landscape — dotted by passers-by and grazing cows — into a film within a film. At one point, a mewling kitten rides along; later, so does a doomed chicken.

“Manakamana” was directed by Stephanie Spray and Pacho Velez, and produced by Lucien Castaing-Taylor and Véréna Paravel, who directed “Leviathan,” an unflinching, at times nauseating, immersion in the carnage aboard an industrial fishing vessel. Mr. Castaing-Taylor also created, with Ilisa Barbash, “Sweetgrass,” a considerably less brutal, less brutalizing look at Montana sheepherders and their baaing charges. (All three movies were developed with the Sensory Ethnography Lab at Harvard University.) The intersection of humans and animals in these particular films is striking, sometimes difficult to watch and meaningful simply because it is so foregrounded: raw, meet the cooked. The animal slaughter in “Manakamana” takes place off screen; it’s evoked rather than shown, as in the shot of a cable car crammed with piteously bleating goats, yet it resonates throughout.

One of the most bracing features of “Manakamana” is how little overt information it offers about the people in front of the camera, in pointed contrast to the overexplaining that takes place in many contemporary documentaries. The film doesn’t have a voice-over; it doesn’t expound on the history of Manakamana or Nepal. Everyone who rides the cable car is listed in the final credits, but no one is identified while on screen. The passengers’ largely minimal conversations and murmurings are translated, but when some clam up completely, you’re on your own as to what they’re thinking. That’s true even if Mr. Velez has said, in an interview in Film Comment, that he saw fear in the face of one older passenger as well as what he called “her spiritual satisfaction.”

Because he and Ms. Spray don’t try to control your viewing experience or steer your gaze — there are no cutaways to trembling lips or close-ups of fluttering eyes — it’s hard even to guess what that woman’s face expresses. She may be experiencing fear or awe; she may also have had heartburn or a full bladder. She may have been tired of being on camera. This insistent uncertainty may drive some viewers to distraction, yet the incertitude makes the film as ethically radical as it is formally rigorous: By refusing to reduce this woman to a documentary prop — especially during her sacred journey — Mr. Velez and Ms. Spray affirm both the limits of their own knowledge (and the constraints of their method) and the ethical obligations that come when people become subjects.

This circumscribed approach in “Manakamana” and some of the other Sensory Lab titles may partly be a response to how nonfiction cinema’s already problematic hold on the truth has been further loosened by digital technologies. Part of the enduring appeal of documentary has always been its claim on the real and the assurance that the results bear a strong relationship to the world as it exists. It’s never been that simple, of course, no matter how shaky the camera and pared down the style, and digital technologies have only complicated the picture as has fiction film’s absorption of documentary conventions. By focusing on such a narrow slice of Nepali life, Ms. Spray and Mr. Velez have ceded any totalizing claim on the truth and instead settled for a perfect incompleteness.