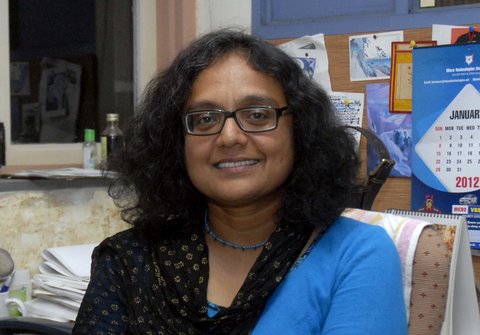 On May 13, the only two Indian journalists in Pakistan, Snehesh Alex Philip of the Press Trust of India and Meena Menon of The Hindu, were told by the country’s Ministry of Information that their visas would not be renewed and that they would have to leave Pakistan in a week.

The ministry provided no reason for its decision, but Pakistan has expelled foreign journalists in the past, including Declan Walsh of The New York Times, who has since been based in London.

India and Pakistan had reached an agreement in the late 1970s to allow each country to post two journalists in the other. Currently, there are no Pakistani journalists in India.

The two Indian journalists had been in Pakistan since August. Their predecessors had spent more than six years each in Islamabad but left Pakistan after being denied visa extensions in July.

India Ink spoke with Ms. Menon, who is now in Mumbai, about her time as a foreign correspondent in Islamabad, Pakistan’s capital. Earlier this week, she wrote an article in The Hindu about her parting thoughts on Pakistan.

What is the unofficial reason, according to you, for your expulsion?

There are several rumors floating around. I cannot be certain about any one single reason. One of the assumptions is that even though the Nawaz Sharif government has been making friendly overtures to India, the army would rather have us think that it is maintaining a hard-line position. And our expulsion is one way to show that.

Is the news media a casualty in the tussle between the Pakistani state and its army?

I would say so. Our expulsion is a very small part of it. The Pakistani media is the main casualty. There are several reasons for that. After Pervez Musharraf was indicted for high treason last year, the army felt kind of humiliated; after all, it was the first time that a military dictator was being indicted.

Also, there was the other issue of dealing with the Tehrik-e-Taliban Pakistan, the militant outfit. The army has been under pressure on that front as well. They are also under severe Western, especially American, pressure to put an end to all the terrorist safe havens in the country. All these have made the army react severely to situations, in a way to assert its importance and relevance.

Do you think your interview in March 2014 with the Baluchi leader Mama Qadeer Baloch, who had walked over 1,800 miles from Quetta to Islamabad, was one of the stories that irked Pakistani officials so much that they decided to expel you?

I doubt it. If that were the case, I would have been expelled immediately after that was published. But I was pulled up for questioning after that story was published. I was asked to surrender my notes, as they suspected I had printed a false interview with Mama Qadeer.

Frankly, he didn’t say anything in my interview that was unheard of before. He just said people would vote for independence, if there was a referendum in Baluchistan. It was hypothetical and his view.

Do you think your expulsion is a test for the new government in India to set a tone for its relationship with Pakistan? How do you think the Indian establishment will deal with this?

I cannot speculate about this. I can only say that healthy trade relations are something both nations are genuinely keen on. There are a lot of expectations in Pakistan from the Modi government. Nawaz Sharif has been fairly serious about good relations with India as well.

What was it like to be an Indian correspondent in Islamabad?

As I have mentioned in my last article from Pakistan, the people of the country have been very warm toward me. We had access to major government establishments and the Supreme Court.

But there are several logistical nightmares. First of all, we were given single-entry-visit visas, which means we are stuck there and cannot return home when we want to, unless they choose to let us go and give us the required papers.

The visas they grant us are valid only for three months, which means we have to constantly finish paperwork in order to keep our visa status valid. These visas are also city-specific, which means we are bound to the confines of Islamabad. The bilateral agreement between India and Pakistan says that we should be allowed visas to at least three cities. A lot of the stories are happening outside the dry political city, and one cannot cover it.

I was denied a visa to visit Taxila, which is a World Heritage site; even here there is suspicion about why I wanted to visit the place. They suspect Indian journalists to be RAW [Research and Analysis Wing] agents, and especially women are looked at as honey traps, which is hilarious.

How difficult was it for you to leave your friends behind in Islamabad?

I am touched by the hospitality and love extended to me by the ordinary Pakistani and my Pakistani friends. One evening, my friend and I had coffee at an Islamabad cafe, and when we parted ways, she was approached by a few men and was questioned about me extensively, like most of the people I had met. Even coffee sessions between friends are suspect because I am an Indian.

During my last two days in the country, I was constantly followed by the representatives of the establishment, including inside the money changer’s bureau and a cake shop. On the last day, when I was taking the taxi to the airport, the driver told me that those who were following me had asked him to be cautious as I was an Indian and I was leaving the country.

They had asked the earlier taxi driver, who was most helpful to me in finding a replacement key to my suitcase which had broken, to overcharge me because I was Indian. They stood outside my house and questioned the tempo driver who was taking the furniture I had sold at the last minute. Even my cook who had worked with The Hindu for nearly two decades was not spared.

“Don’t get put off by those people,” my friendly taxi driver, a graduate who had no option but to ply a taxi, advised me and asked me to “Come back and write about the difference between the ordinary people and the establishment.”

(This interview was condensed and lightly edited.)