By Our RepresentativeA two-day International Conference on the Religious Right, Secularism and Civil Rights held in London on October 11-12, 2014, has bracketed Hindutva, with particular reference to “Rashtriya Swayamsewak Sangh (RSS) in India”, as one of the many important far-right groups across the globe who are “using religion for political supremacy”. Likely to raise many an eyebrow, especially in India, where the RSS has direct support from the Prime Minister Narendra Modi, the conference said, “This rise (or far-right) is a direct consequence of neo-conservatism and neo-liberalism and the social policies of communalism and cultural relativism.” What is particularly likely to raise controversy is that the manifesto, adopted at the conference, puts Hindutva (RSS) with such far-right bodies like “the Islamic State (formerly ISIS), the Saudi regime, the Christian-Right in the US and Europe, Bodu Bala Sena in Sri Lanka, Haredim in Israel, AQMI and MUJAO in Mali, Boko Haram in Nigeria, the Taliban in Afghanistan and Pakistan to the Islamic Republic of Iran and the Islamic Salvation Front in Algeria”. It says, “These are some of the most prominent examples of the far-right movements cropping up across the globe.”Calling on people everywhere to form a International Front for Secularism and strengthen a human alternative to the religious-right, those who participated included Bangladeshi-born writer Taslima Nasrin, who has just been allowed to continue living in India, Indian labour historian Dilip Simeon, Southall Black Sisters director Pragna Patel, philosopher AC Grayling, Aliyah Saleem who spent six years in an Islamic school in Britain, prominent French writer Caroline Fourest, Pakistani-born human rights activist Kiran Opal; Iranian writer-journalist and documentary filmmaker Lila Ghobady, and others.The manifesto says that in the worldview of these far-right organizations, “universalism, secularism and citizenship rights have been abandoned and segregation of societies and ‘communities’ based on ethnicity, religion and culture have become the norm.” It adds, “For many decades now, people in the Middle East, North Africa, South Asia and the diaspora have been the first victims but also on the frontlines of resistance against the religious-right (whether religious states, organisations and movements) and in defence of secularism and universal rights, often at great risk to their lives”. 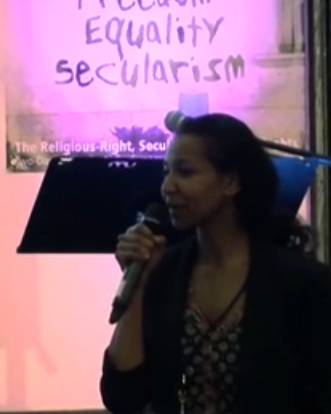 The manifesto calls upon “people everywhere to stand with us to establish an international front against the religious-right and for secularism”, demanding “complete separation of religion from the state”, insisting secularism should be a “fundamental right”. It said, there should be a “separation of religion from public policy, including the educational system, health care and scientific research”, with “freedom of religion and atheism and freedom to criticise religions”.
Underling that belief religion should be “a private affair”, the manifesto indirectly favours the proponents of common civic code in India when it wants the “abolition of religious laws in the family, civil and criminal codes”, adding, there should be “an end to discrimination against and persecution of LGBT, religious minorities, women, freethinkers, ex-Muslims, and others.”
A statement issued by the conference organizers said, “A broad coalition of secularists, including believers, free-thinkers, agnostics and atheists assembled from the Middle East, North Africa, South Asia and the diaspora at the unprecedented and historic gathering to discuss resistance against the repression and violence of ISIS and other manifestations of the religious-right, including in Afghanistan, Algeria, Bangladesh, India, Iran, Israel, Libya, Pakistan, Sri Lanka, Sudan, Turkey, Tunisia and Yemen. They also discussed the urgent need to defend secularism, universal values and citizenship rights.”
The conference was convened by Algerian sociologist Marieme Helie Lucas and Iranian-born campaigner Maryam Namazie, adopted the Manifesto for Secularism, highlighting “the voices of the many persecuted and exiled, the long standing resistance against the religious-right and the depth and strength of the demand for secularism all over the world despite grave risks. It also set the stage for the development of a broad international front for secularism to challenge the religious-right, racism and all forms of bigotry”.
Source: Counterview