HOUSTON: At the fundraiser for the Hindu American Foundation held this past Saturday, November 15 (see page 03), the plight of the tiny Yezidi community which has lived for generations in the northeastern portion of Iraq, bordering on Kurdistan and Turkey, was brought out and the HAF taken on their cause and vowed to help in whichever way they can.

Other members of the Houston Hindu community see similarities between Yezidism and Hinduism and activists Vijay Pallod and Gita Bhatia of The Art of Living Foundation have pledged their support, going so far as to sponsor a meeting between the local Yezidi organization president Haider Elias and the spiritual leader Sri Sri Ravi Shankar himself at the International Association for Human Values conference that is currently being held in the Kurd capital of Erbil. Elias and another member of his organization, Murad Ismail, were able to address the audience for a few minutes at the HAF fundraiser. 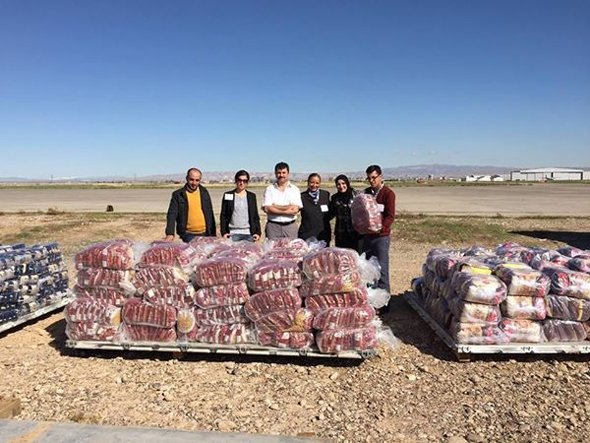 There are estimated to be about 1 million Yezidis worldwide, with the majority in Iraq and others scattered across Syria, Germany, Russia, Armenia, Georgia and Sweden. They follow a religion that is linked to Zoroastrianism and ancient Mesopotamian religions. They are monotheists, believing that God has placed the earth under the care of seven “holy beings” or angels, the chief or archangel being Melek Taus, the Peacock Angel, who fell from grace and then, after remorseful tears extinguished his hellish prison, reconciled with God.

This belief has evoked a Sufi Iblis connection, which other religions in the area equate with the evil spirit Satan. Hence, the Yezidis have been persecuted as “devil worshippers” within the borders of modern Iraq under the Sadam Hussein regime, Sunni Muslim revolutionaries and now the Islamic State of Iraq and Syria or ISIS in its campaign to purify the region of non-Islamic influences. There are numerous reports of mass killings and abductions, and the siege of the Yezidis around Mount Sinjar, which was only broken two months back allowing many to escape to Kurdistan. Elias’ own brother was shot and killed during this time.

A former translator for the US Army and an advisor on civilian and cultural affairs, Elias has been in Houston for the past five years with his wife and three children. They fled Iraq as it became too dangerous for him to stay there. He was a pre-medical student in Iraq, but is now pursuing a degree in psychology at the University of Houston, hoping to finish in another year.

At the Art of Living International Center, Bangalore, Sri Sri Ravi Shankar held a webcast, joined by people in 2,000 locations in 74 countries, on November 15 asking for his guidance to focus attention to the Yezidi situation. Sri Sri gave the example of the pluralism in India were people from different faiths work together. He urged the people of the troubled Mideast region to use this same multi-cultural, multi-religious coexistence approach. He lamented the 74 different genocides that have happened to the Yezidis and that it would be a disaster if this minority community were to disappear. He wanted a chance to meet with Abu Bakhr Baghdadi, the ISIS leader and have some dialogue on the Yezidi issue.

The International Association of Human values a sister concern of Art of Living, along with other NGOs in the Houston area, plans to organize a fund-raising dinner in December for the Yezidi cause.