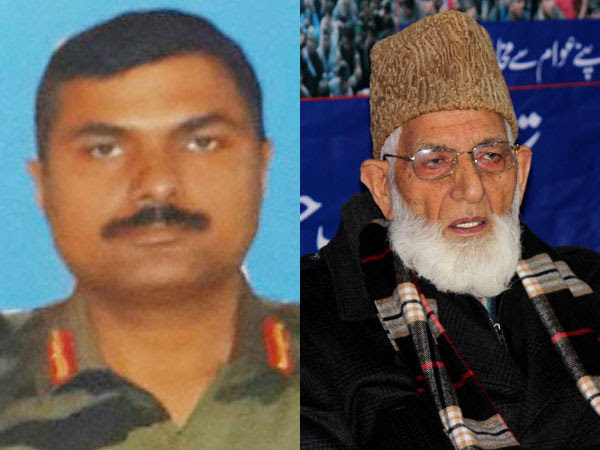 Bengaluru : The loss and the pain of a martyred soldier seems useless when someone from his own country refuses to empathise with the valor and the pride he died with.

The story of slain Colonel MN Rai and separatist leader Syed Ali Shah Geelani is one such instance. Rai laid down his life, fighting terrorists in Kashmir; in fact, giving them a chance to surrender so that there is lesser bloodshed.

On the contrary, Geelani a separatist leader in Jammu and Kashmir is of the belief that the slain terrorists were the one’s who became martyrs, who sacrificed their worthy lives for a cause.

The separatist ideology is clear in Jammu and Kashmir, that it is a part of Pakistan. In fact, India has blamed Pakistan of supporting and training mujahideen to fight for Kashmir.

Interestingly, according to official figures released in Jammu and Kashmir assembly, there were 3,400 disappearance cases and the conflict has left more than 47,000 people dead as of July 2009.

Every successful infiltration bid at the border is a stamp at Pakistan’s victory of re-instating the fact that Kashmir is their’s.

Theories that are a reality

Also consider this, the ceasefire violations at the LoC do not seem to come to an end at any moment, why?

Kashmir is dealing with its own demons of an unstable government and internal strife and a ceasefire violation adds to the burden. Goes without saying, the Defence forces are left at a loss as to where to concentrate-protecting the borders or stopping the civilians from helping the infiltrators.

A study by Robert Bradrock, a scholar from London’s Kings College, that involved interviewing 3,774 people in both parts of Kashmir in September-October 2009 revealed shocking figures.

44% of people on the Pakistani side favoured independence, compared to 43% in Indian Kashmir.

Moreover, only 2% of the respondents from the Indian side favoured joining Pakistan. Coincidentially, most of the people in Srinagar and Budgam districts were of this idea. (please note that the infiltration bids are more successful in these areas).

So, the basic idea is to fan the ideas of those 2% population and create more problems for the state and weakening the border.

Let us face the fact, India and Pakistan share an irrevocable relationship of hate. So, there can never be a bridge between the two. But can we really afford to have the presence of Geelani and the likes to make the differences more severe? Perhaps no.
by: Pallavi Sengupta