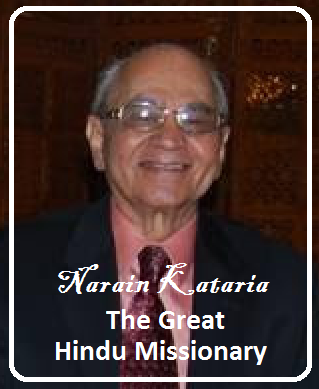 HENB | New Delhi | Nov 4, 2015:: A great Hindu Missionary, a gallant  Dharma Yoddha (fighter) is no more with us. Narain Kataria Ji of ‘Indian American Intellectual Forum’, an indefatigable activist among Hindu Americans for the cause of Dharma, passed away  in his sleep in the hours between November 2nd and November 3rd 2015 in NYC. He was 85.

The best tribute to his legacy and his memory is to continue the service he has been rendering to protect dharma. His manifold philanthropic activities enriched the various Hindu movements in America and other parts of Hindu World through his great contributions to Hindu Swayamsevak Sangh, Hindu Mahasabha of America, Vishwa Hindu Parishad of America, Justice For Hindus and Overseas Friends of BJP.

As an ardent student of History, Kataria envisaged his opinion about the menace of Jihad to destroy the world peace and about its remedies.

He was also active in his blog http://narainkataria.blogspot.in/ .

Many times in the past he advised Hindu Existence Forum positively and interacted with Upananda Brahmachari, the Chief Editor of HENB for the upcoming worldwide Hindu Resurgence and a Hindu Bharat.

Hindu Existence Forum conveys heartfelt condolences to the members of his family and friends.