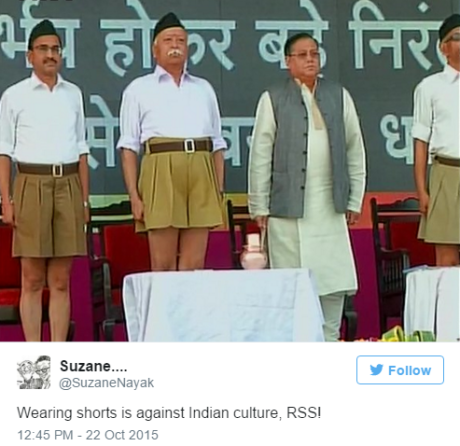 Assuming that there are 50,000 shakhas and 10swayamsewaks in each shakha, they will need 5 lakh new uniforms, an RSS worker said. Another pracharak said, “Plus there are swayamsewaks who don’t attend dailyshakhas, so there will be a huge requirement of new uniforms. It could take years to implement the decision once the new uniform is finalised.” – Shyamlal Yadav

The “half-pants” traditionally worn by RSSswayamsevaks could soon make way for trousers as the Sangh considers a new dress code to attract the youth.

A discussion on this was held last week at a meeting in Ranchi, where some swayamsevakswearing the new uniforms paraded before RSS members, sources said. The debate will be taken forward in March next year, during a meeting of the Akhil Bhartiya Pratinidhi Sabha—the highest decision making body of the RSS—in Nagaur.

“Sarsanghchalak (Mohan Bhagwat) andSarkaryawah (Bhaiyyaji Joshi) are both in favour of a new dress code and feel we must change with time. But there are some who are opposed to the idea,” said a senior pracharak who attended the Ranchi meeting.

Sources said two options are being considered. The first includes a T-shirt (white with more colour options), black trousers, the same black cap as the present one, white canvas shoes and khaki socks.

The second option includes a full-sleeve white shirt, pants—the proposed colours are khaki, navy blue, blue or grey—black leather or rexene shoes, khaki socks, a canvas belt and a black cap. This is the first time the uniform would undergo such a major change. The RSS, it is learnt, is discussing how to implement the change based on availability of the new uniforms. Assuming that there are 50,000 shakhasand 10 swayamsewaks in each shakha, they will need 5 lakh new uniforms, an RSS worker said. Another pracharak said, “Plus there are swayamsewaks who don’t attend daily shakhas, so there will be a huge requirement of new uniforms. It could take years to implement the decision once the new uniform is finalised.”

The last change in the RSS uniform was in 2010, when the canvas belt replaced the leather one. Even that decision took two years to implement because of availability problem. From the inception of the RSS in 1925 till 1939, the Sangh had an all-khaki uniform, but in 1940, white shirts were introduced. Leather shoes replaced long boots in 1973 and later rexene shoes were also allowed as an option.

Though there have been several discussions on getting rid of the khaki shorts, older RSS workers, particularly ones from Maharashtra, are strongly opposed to the idea, sources said. But the issue has cropped up again as several pracharaksfeel khaki shorts deter youth from joining the RSS, sources said. Last year, some senior pracharaks were given the task of coming up with a concrete proposal for the new uniforms. – The Indian Express, 4 November 2015

» Senior Editor Shyamlal Yadav is a RTI specialist at his news outlet Indian Express. He knows like no other how to take heaps of requested documents and extract a news story out of them, often cornering many a Member of Parliament and Minister. 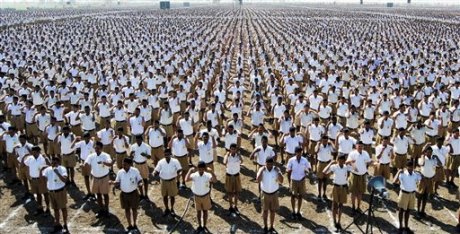