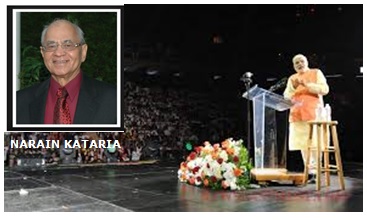 New York (11-11-2015) Per sources, the organizers of Indian PM Modi program in New York in 2014 and 2015 belittle the presence of Narain Kataria. While many a questionable characters were invited to a dinner with Indian PM Modi in 2014, Narain Kataria, who had worked very hard despite losing his wife during this time, was ignored and not invited.

In 2015, Narain Kataria was asked to do all the running around, but when it came to having an audience with Indian PM Modi, he was not invited; many former Congress supporters and people who had not done anything for PM Modi, were given an opportunity to meet PM Modi.

Narain Kataria, an iconic Hindu activist and leader was pained at this apathy and conveyed it to many of his close associates to take such apathy up with powers that be so that in future sincere workers wouldn’t be taken advantage of by so called “leaders.”

“He didn’t expect anything, but was pained to see that many less deserving people were getting to meet Indian PM Modi and he, who at the advance age of 85 was standing with placards in cold, was overlooked.” – A tweet said in his condolence communication.

“Society should know what kind of leaders it has, that surround Indian PM Modi when he comes to USA. We didn’t want to point fingers at anyone except ourselves as a whole community.   As a community, we need to recognize those who are working selflessly among our own and need to ensure only those leaders working selflessly for community are chosen” said another one ​tweet in his tribute remarks.