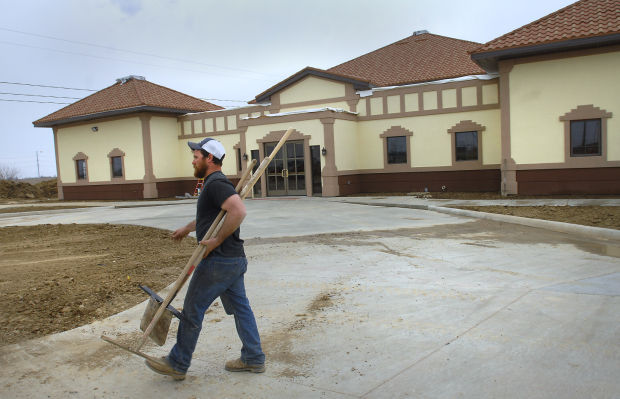 In this April 2014 file photo, a worker completes preliminary landscaping at the new Hindu temple at 1815 Tullamore Ave. in Bloomington.

BLOOMINGTON — To help their neighbors better understand their beliefs, Bloomington-Normal Hindus are opening their temple for a community visit.

An open house is planned from 3 to 5 p.m. March 19 at the Hindu Temple of Bloomington-Normal, 1815 Tullamore Ave., Bloomington.

“Attendees will have the opportunity to see the temple sanctum, learn about Sanatana Dharma Hinduism, and get a better sense about the Hindu way of life,” said Chetan Desai, president of the temple’s board of trustees.

The event is part of Not In Our Town’s efforts to offer Twin City residents ways to learn about different beliefs through local interfaith programs and open houses.

A similar open house Feb. 6 at Masjid Ibrahim in Bloomington drew about 100 people wanting to learn more about Islam from their Muslim neighbors. Another 100 were turned away prior to the event because there wasn’t enough room to accommodate such a large crowd.

More than 250 people attended a NIOT interfaith rally Dec. 16 in downtown Bloomington to show solidarity with the local Muslim community. It was a response to anti-Islamic rhetoric being heard in other parts of the country — and among some leading politicians — in the wake of the San Bernardino, Calif., and Paris terrorist attacks.

“It is a pleasure to help further this NIOT effort,” said Desai.

As seating is limited, those wanting to attend the open house need to RSVP online athttp://goo.gl/forms/qEZtKioea1.

The event will open with a Vedic chant in Sanskritam, organizers said. That will be followed by an overview at 3:20 p.m. of the philosophy of Sanatana Dharma — a code of conduct and value system that has spiritual freedom as its core, they said.

The only restriction is a prohibition on attendees taking photographs or videos inside the temple.

For local Hindus, it is the first community event at their temple since its grand opening in April 2014. Prior to the temple’s construction the area’s Hindu population had to travel to Peoria or Chicago for formal worship.

There are more than 1 billion Hindus, mostly in India, making the faith the third largest in the world, after Christianity and Islam.