Huffington Post Editors
The Huffington Post
Maha Shivaratri (also Shivratri) is celebrated on the evening of March 7, by Hindus all over the world. This festival glorifies the Hindu god Shiva, believed to be the lord of cosmic destruction and dance. The festival is celebrated on the 14th night of the new moon during the Hindu lunar month of Phalguna. 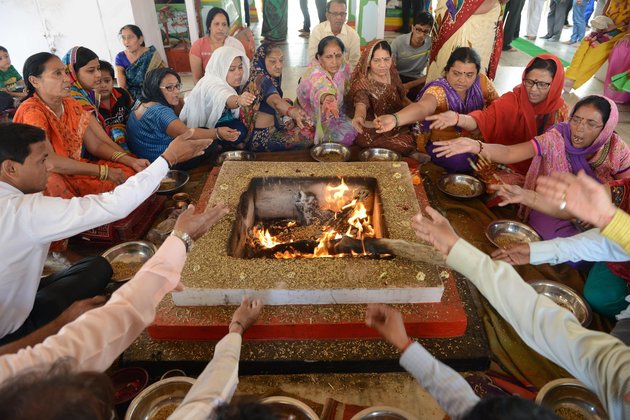 Indian devotees participate in a traditional ‘Yagna’ ritual offering at a temple devoted to the deity Shiva to mark the Hindu festival of Maha Shivratri in Ahmedabad on March 7, 2016. / AFP / SAM PANTHAKY (Photo credit should read SAM PANTHAKY/AFP/Getty Images)

The celebration of Maha Shivaratri begins with a night vigil leading up to the day of the festival during which many Shiva devotees fast and offer special prayers. Shiva is worshiped in the form of a lingam, a vertical, rounded column, representing the male creative force and the infinite, indescribable nature of God, and the yoni which represents female creative energy. Together they represent the union of organs, and the totality of creation.

Flowers, incense and other offerings are made, while prayers and bhajans are chanted. Bhang, an intoxicant made from the cannabis plant is consumed by many on the occasion of Maha Shivaratri. 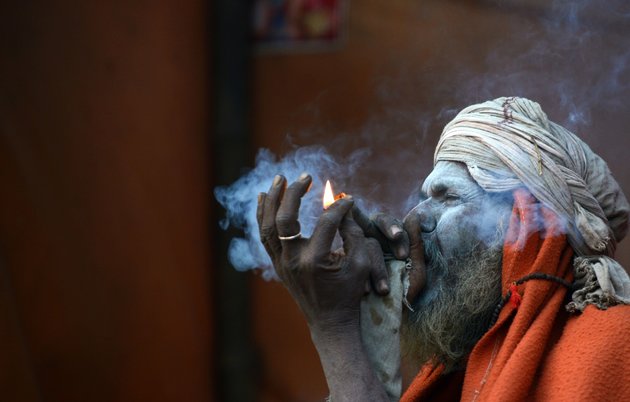 A Nepalese Sadhu (Hindu holy man) smokes a chillum, a traditional clay pipe, as a holy offering to Lord Shiva, the Hindu god of creation and destruction, near the Pashupatinath Temple in Kathmandu on March 6, 2016, on the eve of the Hindu festival Maha Shivaratri.
Hindus mark the Maha Shivratri festival by offering special prayers and fasting. / AFP / PRAKASH MATHEMA (Photo credit should read PRAKASH MATHEMA/AFP/Getty Images)

The celebration of Maha Shivaratri is attributed to several tales in Hindu mythology. One of the most popular tales traces its origins to samudra manthan, or churning of the ocean of milk. According to this belief, when the gods and demons were churning the ocean of milk to obtain amrita (the drink of immortality), they came across many unusual substances including a deadly poison. Terrified, the gods approached Shiva for help, and out of compassion for all living beings, Shiva swallowed the poison. The poison was so potent that it turned his neck to blue.

One of the most famous prayers recited to lord Shiva on the occasion of Maha Shivaratri is the Mahamrityunjaya Mantra, also known as the death-conquering mantra. Below are the words of the mantra in Sanskrit and a translation:

Translation: We meditate on the Three-eyed reality which permeates and nourishes all like a fragrance. May we be liberated from death for the sake of immortality, even as a cucumber is severed from bondage to the creeper.

Listen to the Mahamrityunjaya Mantra in the video below and scroll down for photos of this year’s Maha Shivaratri celebrations.