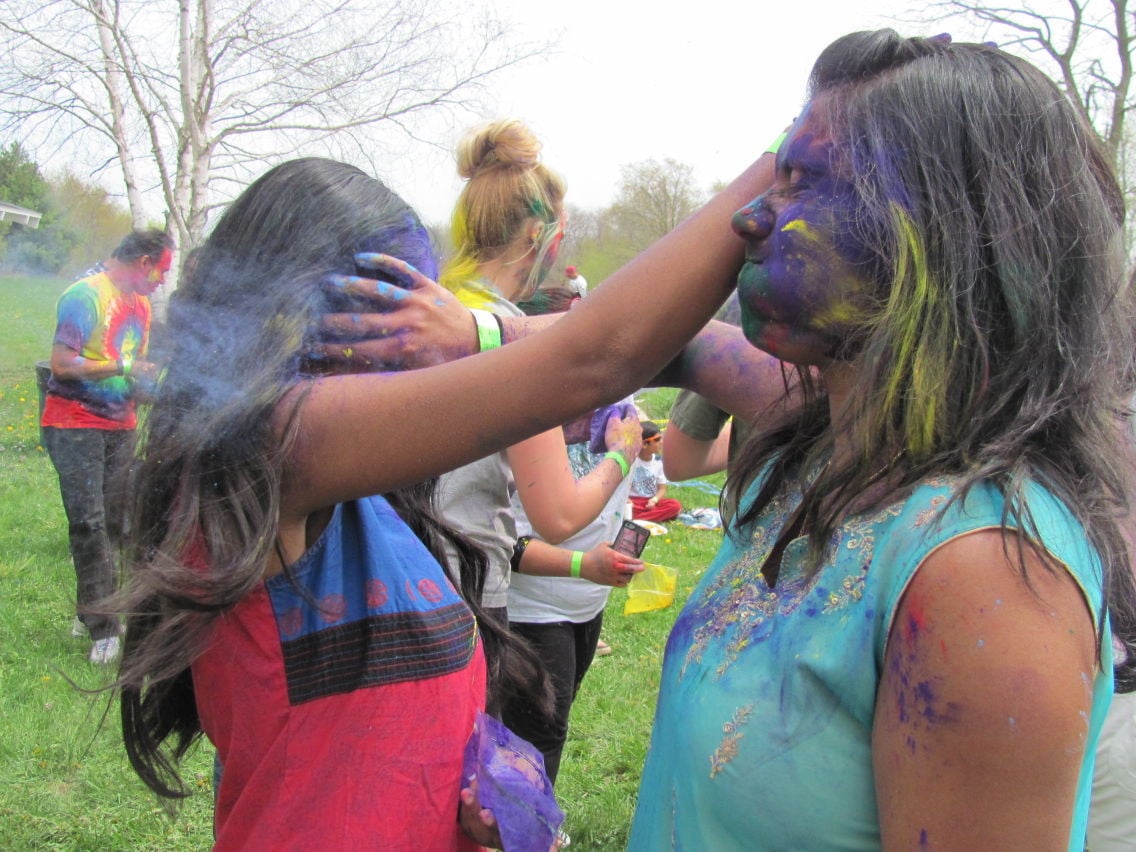 Vasavi Chandramouli, 15, left, a student at Memorial High School, exchanges colored powder Sunday with Narisha Reddy, 21, who attends UW-Platteville. Reddy brought more than a dozen of her fellow students to the festival.

Soha Gandhi, 6, a first grader at Core Knowledge Charter School in Verona, flew a kite for the first time Sunday at a Hindu kite and color festival in Fitchburg. “It’s going!” said Soha when her kite lifted off.

Hundreds of people flew kites Sunday during a festival at the American Hindu Association’s Shiva Vishnu Temple and Cultural Center in Fitchburg.

FITCHBURG — “Star Wars” was represented, as was SpiderMan, Nemo and Barbie. There were butterfly kites, dragon kites, big kites, small kites — kites of all stripes and colors.

Organizers, in fact, sold out of the 100 kites they had on hand Sunday for a Hindu festival in Fitchburg.

“I’ve never seen so many kites in my life!” said Chris Dsouza, 7, a first-grader at Sunset Ridge Elementary School in Middleton.

Dsouza had just stepped out to the big field at the American Hindu Association’s Shiva Vishnu Temple and Cultural Center, a 7-acre property the group purchased in 2009 at 2138 S. Fish Hatchery Road.

“It’s really awesome,” said Chris’ father, Collin Dsouza, who had yet to unwrap their new Teenage Mutant Ninja Turtles kite. “It’s great to see all the kites up in the sky.”

The Fitchburg festival mixed two traditional Hindu spring festivals for the first time — the kite festival, and Holi, also known as the festival of colors, where participants grab handfuls of colored powder and throw it into the sky.

They also put it all over their friends, family members and sometimes even strangers.

“All of these activities are designed to bring the community together,” said Narend Reddy, president of the local American Hindu Association. “It also is a chance for non-Hindus to come and integrate into the community and see what we are doing.”

What they are doing is constructing a 7,000-square-foot community center and temple on the property. Construction should be complete by the end of the year, Reddy said. Visitors were invited to take tours of the center-in-progress.

Currently, the temple’s members worship in a three-bedroom house that sits on the property, but that space no longer meets the growing community’s needs.

Association treasurer Samir Datta estimated that there are 3,000 Indian families in the Madison area, the majority of whom are Hindu.

“We feel like we are in India. The children are very happy,” said Jayashri Shirule, who was at the festival with her husband, Bharat Shirule, and his parents visiting from Maharashtra, India.

The couple moved to Madison 18 months ago after spending 18 months in Anchorage, Alaska. The festival felt like being back home in India, but with more space to spread out, said Bharat Shirule, an IT manager at American Girl in Middleton. “Here, we have plenty of ground that we can enjoy.”

“In some other cities they do it on a larger scale,” Reddy said. “We want to get there.”

He is also interested in growing the group’s Ratha Yatra or Chariot Festival, which will be held July 9. Last year, the event drew about 1,000 people, packing the center’s grounds, said Bikash Pattnaik, one of that festival’s founders.

Venu Pittala, coordinator of Sunday’s festival, was thrilled with the turnout on a day that started with rain but became warm and sunny by the time the event started. There also was a perfect amount of wind for the kites.

It was the first time in Wisconsin that the kite and color festivals had been combined, he said.

“We had a tremendous response from the community — and not just Indians,” Pittala said.