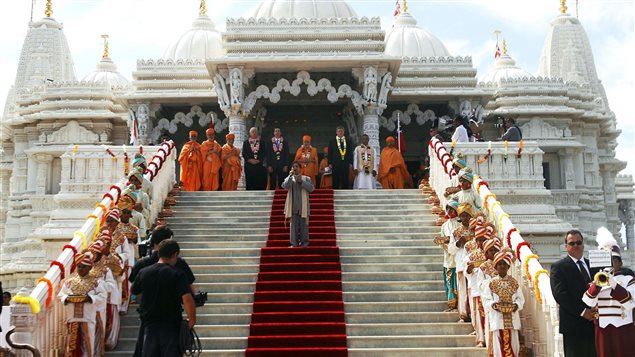 A file photo of the grand inauguration of the BAPS Swaminarayan Mandir on Sunday, July 22, 2007 in Toronto. The temple is now a landmark on one of Toronto’s major highways. It will be filled with people celebrating the Hindu New Year tonight and continuing for the next few days into the weekend.
Photo Credit: CP / Nathan Denette

The Hindu New Year is celebrated today, in many places across Canada. The solar New Year, comes at the time when nature is coming back to life in mid-April. It’s a big celebration in southern India.

In Canada this springing to life varies; in southern British Columbia in places like Vancouver and Victoria nature is in full flower, but to the north and on the east coast and Newfoundland, people may still be digging out from some of the last winter storms.

Paresh Pandya, the priest at the Mandir Temple in Windsor, Ontario, says the focus of the occasion is largely religious, a time of blessing and focusing on health and wealth for the New Year of 2016, or 2072 in India.

The occasion has several names in the many languages of India.

It’s known as Vaisakhi in Punjab for example. People may be visiting the temple this evening. or during celebrations held this Friday or Saturday to better accomdate families.

Paresh Pandya will welcome Hindus from many different traditions and from a 200 kilometre radius around his temple in Windsor. This includes people coming from various locations in southern Ontario, and various places across the U.S. border in Michigan.

People will arrive with offerings, of sweets and food for example, in supplication for blessings for good health and prosperity in the coming year. The Goddess Lakshmi will be honoured for her good favour in matters of money and financial security.

When asked about the rather low key nature of the celebration, Paresh Pandya says the Hindu New Year is observed more in a religious and spiritual framework than a social occasion, although family gatherings are an important part of the annual rite of passage.