“We are witnessing an increasing participation in International Yoga Day celebrations year on year,” said Ashwini Garg, organizer of the International Day of Yoga Celebration Organizing Committee (IDYCOC). “This indicates the growing popularity of Yoga.  By incorporating yoga as a regular practice into our daily lives, we pledge for not just a healthy lifestyle and complete well-being, but also for a better tomorrow.” Following its success in 2015, IDYCOC conducted the 2nd International Yoga Day at Kresge Lawn. Hindu Swayamsevak Sangh (HSS), Sewa International, Art of Living, Samskrita Bharati and ISCON were at the forefront of the organizing process.

Yoga finds its roots in ancient India and is a spiritual, mental and a physical practice via breathing techniques, postures, and meditation. International Yoga Day is observed each year to raise awareness about yoga as well as seeking to attain harmony and peace with the mind, body and soul.

The various sessions at the event in the form of yogic exercises, relaxation techniques and meditation were led by expert yoga performers and volunteers. Sukshma (sbtle) Yoga session where the audience performed gentle yogic exercise with proper breathing techniques was led by Jay Gupta. This was followed by Suryanamaskar led by volunteers of HSS and the Art of Living Foundation. Natya Yoga was demonstrated by Ranjani Saigal. 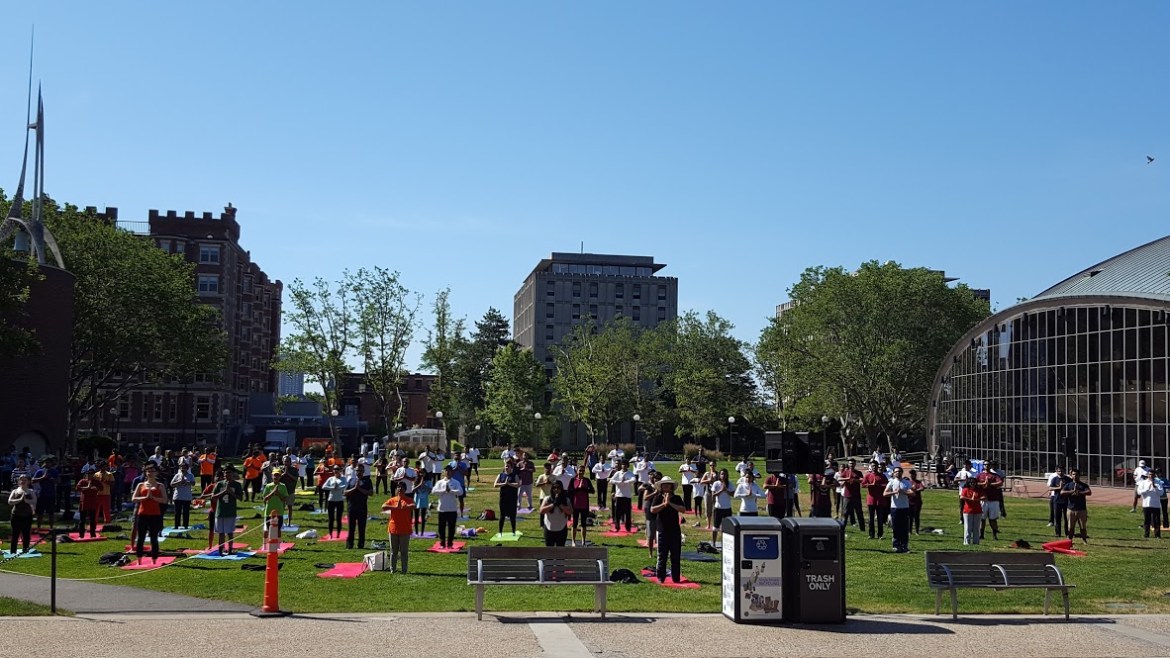 New Hampshire State Representative Latha Mangipudi presided over the event as the chief guest for the occasion and spoke about the significance of Yoga.  She also recognized participating Yoga studios which are working towards spreading awareness about yoga.

L.T. Ngaihte, head of Chancery in Consul General of India NY office, who travelled from New York to represent CGI at the event, congratulated the people of Boston for organizing the event and presented a gift to the IDY organizing committee.

Recognizing June 19 as Day of Yoga in Massachusetts, Governor Baker urged all citizens to take cognizance of the event and participate fittingly in its observance.