Given [Tipu’s] record of brutality towards fellow Indians, it is difficult to think of him as a great freedom fighter. At best, he belongs to the shades of grey that mark a lot of history. – Sanjeev Sanyal

Despite their success in Bengal and control over the sea, the British were far from being the masters of India. The Marathas would remain the biggest threat to their hegemony for another half a century till they were finally defeated in the third Anglo-Maratha war of 1917-18. The East India Company also had to contend with the hostility of a number of other rulers such as Tipu Sultan, the ruler of Mysore. Tipu is often portrayed as a great patriot in Indian history textbooks for having opposed British colonization but his record is not so straightforward. While it is true that he fought the British, he was constantly trying to subjugate other Indians—the Marathas, the Nizam of Hyderabad, Travancore, the Kodavas of Coorg to name just a few. He was also considered a usurper by many of his own subjects.

Tipu Sultan came to the throne in 1782 on the death of his father Hyder Ali. Hyder Ali had usurped the throne of Mysore from the Wodeyar dynasty that he served as a military commander. Over the next few years, Tipu crushed all dissent within his kingdom as well as took over the smaller kingdoms adjoining Mysore. The Karnataka coast and the Kodavas of Coorg (now Kodagu in Karnataka) soon found themselves under savage assault. The indiscriminate cruelty of Tipu’s troops is not just testified in both Indian and European accounts but also in the letters and instructions that Tipu himself sent to his commanders on the field

You are to make a general attack on the Coorgs and having put to the sword or made prisoners the whole of them, both the slain and prisoners, with the women and children, are to be made Mussalmans…Ten years ago, from ten to fifteen thousand men were hung upon the trees of that district since which time the aforesaid trees have been waiting for me.

Around 1788, Tipu Sultan turned his attention on the Kerala coast and marched in with a very large army. The old port city of Calicut was razed to the ground. Hundreds of temples and churches were systematically destroyed and tens of thousands of Hindus and Christians were either killed or forcibly converted to Islam. Again, this is not just testified by Tipu Sultan’s enemies but in his own writings and those of his court historian Mir Hussein Kirmani. Interestingly, one of the things that Tipu loudly denounced in order to justify his cruelty was the matrilineal customs of the region.

Not surprisingly, hundreds of thousands of refugees began to stream south in Travancore. Tipu now used a flimsy excuse to invade the kingdom founded half a century earlier by Marthanda Varma. Travancore’s forces were much smaller than those of Mysore but Lannoy had left behind a well-drilled army and a network of fortifications. A few sections of these fortifications have survived to this day and can be seen north of Kochi, not far from where the ancient port of Muzeris once flourished. Tipu’s army was repeatedly repulsed by the Nair troops but Travancore knew that it was up against a much larger military machine and was forced to ask the East India Company for help.

The British responded by putting together a grand alliance of Tipu’s enemies that included the Marathas and the Nizam of Hyderabad and, in 1791, they marched on Mysore. Within a few months, the allies had taken over most of Tipu’s kingdom and were bearing down on his capital, Srirangapatna. Eventually, he was 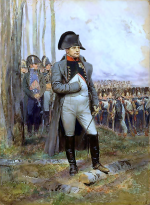 forced to accept humiliating terms—half his kingdom was taken away and he was made to pay a big war indemnity. Given his record of reneging on treaties, the East India Company kept two of his sons hostage till he paid the indemnity.

Friendless in India, Tipu now began to look for allies abroad. It is known that he exchanged letters with Napoleon and had great hopes of receiving support from the French. He also wrote to the Ottoman Sultan in Istanbul and urged a joint jihad against the infidel British. The problem was that Napoleon had occupied Egypt and the Ottomans considered the French the real infidel enemies and the British as allies! The Ottoman Sultan’s reply, later published in the Madras Gazette, makes the point clearly: “We make it our special request that your Majesty will please refrain from entering any measure against the English.”

British intelligence was fully aware of what Tipu was doing and decided to finish him once and for all. The allies again March on Srirangapatna in 1799. The Mysore army was a shadow of its former self and the allies had little difficulty in reaching the capital. After three weeks of bombardment, the walls were breached. Tipu Sultan died fighting, sword in hand. The allies would restore Mysore to the old Wodeyar dynasty from whom Tipu’s father had usurped the throne. Napoleon would do little to rescue his ally but the siege of Srirangapatna would bolster the reputation of a thirty-year-old British colonel named Arthur Wellesley. Now remembered as the Duke of Wellington, he would defeat Napoleon 16 years later at Waterloo.

The Srirangapatna fort lives on a river island just off the Bangalore-Mysore highway. The final siege is so well documented that one can wander around the area and get a very good feel of how the last weeks unfolded. Tipu’s personal effects were taken by the visitors and most of them were shipped to England where they can be seen in various museums.

Tipu died a warrior’s death, defending his fort to his last breath. Moreover, despite the extreme cruelty towards Hindus and Christians in Kerala and Coorg, there are also instances of his making generous grants to temples. His critics will argue that most of these were given after his defeat in 1791.

It is difficult to say if this was a genuine change of heart or a tactical retreat by a cornered bully desperately looking for new friends. Still, given his record of brutality towards fellow Indians, it is difficult to think of him as a great freedom fighter. At best, he belongs to the shades of grey that mark a lot of history. – Newsbred, 23 October 2016. Excepted from The Ocean of Churn by Sanjeev Sanyal.