With this shocking news, I express my personal loss as many of ours inspiration and mentor Dr. Radhasyam Brahmachari left us last night at about 11.40 pm. He was a victim of massive cardiac arrest at his age 71. For the last four days he was treated in a private hospital in Kolkata.

Born in 1946 in village Palang, in district Faridpur and sub-district Madaripur of undivided india, Radhasyam came to India as his family fled to India as victim of partition and communal riots. Then Radhasyam was of only two and half years old.

Radhasyam was an intelligent student of science. He completed his Masters with all difficulties faced by a refugee family. After overcoming all hardships he completed his PhD. He joined Calcutta University in 1972 in the Applied Physics Dept and served there as a prominent scientist and professor with reputation over 45 years, till he retired in 2011, March 31.

Dr. Brahmachari always carried a strong Hindu sentiment as he faced all eventualities of Islamic persecution which led him deeper Islamic studies.

As a result of it Dr Brahmachari emerged as an expert of Islamic psychology and analyst of Quran and Jihad. He was a contributor of various portals like Faith Freedom of Ali Sina and Islam Watch of M A Khan. Dr. Brahmachari wrote many books and booklets on Islam. His landmark booklet “Islamer Tin Sidhanta” (The Decrees of Islam) was the best seller with 20 reprints and lakhs of circulation.

Side by side he also researched on Indian Philosophy and History. His books on the ‘Hindu roots of Tajmahal and Fatehpur Sikri’ (on the basis of PN Oak) and ‘Home Coming of Muslims in Hindu Fold’ (Islami Dharmatva – Ebar Ghare Ferar Pala), ‘Hindu Time Calculation’ (Hindu Kalagannana) and Hindu Genesis and Theory of creation etc became very famous. He was a regular writer in Swastika and Hindu Voice.

In his youth Dr Brahmachari was influenced with the Jan Sangh Politics of Dr Shyama Prosad Mukherjee and Swami Pranavananda Ji of Bharat Sevashram Sangha.

Dr Radhasyam Brahmachari was connected with Vishwa Hindu Parishad and other Hindu organisation in many prominent capacities.

I really respected Dr Brahmachari mainly for two reasons. 1 He put his scientist intelligences to integrate the Hindu thoughts and way of life. and 2. Exposing Islam and its Jihad in a very effective way. These two things inspired me a lot.

Only for once, we differed and got into a scuffle when I opposed his book inauguration of “Bipathgami Hindu Dharma o Hindur Bhabishyat” (Detracted Hindu Dharma and future of Hindus) in Bharat Sevashram Sangha HQ at Ballygunge, Kolkata. The book wanted to propagate b**f eating to get physical strength and depicted Lord Rama as flesh eater”. I could not tolerate the some exact content of the book and the venue where the Swamijis were completely vegetarians. As some Gaourakshak activists took away those book and torn many copies, the programme was cancelled. Afterwards he published a revised edition of the book.

But, Dr Brahmachari was still affectionate to me as he took my whereabouts from my father. And, I never lost my respect for him. He was a great admired of www.hinduexistence.org website and my writings.

I can still remember how he greeted me and greatly commented on my piece, “DANCE OF SHIVA IN CERN” (link: http://wp.me/pCXJT-2dT). Actually, Dr Brahmachari actually loved me too. We shared dias many times in Hindu Congregations, Propagations and Protests.

Dr, Brahmachari was a supporter of Hindu revivalism in West Bengal. He thought Hindus must keep arms for self protection at the time of crisis. He distributed many swords and machetes to Hindu youths whoever came contact to him as he claimed.

He was an original thinker and antagonist of those Hindu organisations doing ultimate harm to the Hindus. He attacked Ramakrishna Mission for their secular and anti-Hindu stand in his book, “Jatamat Tatapath, Sarbadharma Samanay o Ramkrishna Missioner Bhandami” (Assimilation of Many Religions and Hypocrisy of Ramakrishna Mission). He was a fearless crusaders against Radical Islam. He termed ‘Islamic Paradise’ as the ‘Brothel of Allah’.

In his sensesional presentation in Bengal, “Keno Hindu Mayaeder Musalman cheleder biya kara uchit nay” (why Hindu girls should not marry Muslim boys), a most popular 4 pages leaflet  articulation, he rescued many Bengali Hindu girls from the clutches of Love Jihad. 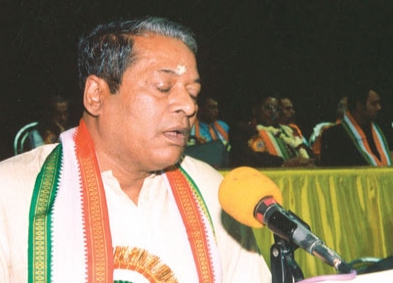 His contribution for Hindu society and Hindu Organisation will be ever memorised. He was generous person and great soul. May Almighty give his blessings to the departed soul.

Death of Dr Radhasyam Brahmachari is really a loss for Hindu Society and in the movement of exposing Islam.

I bow to Dr Radhasyam Brahmachari.