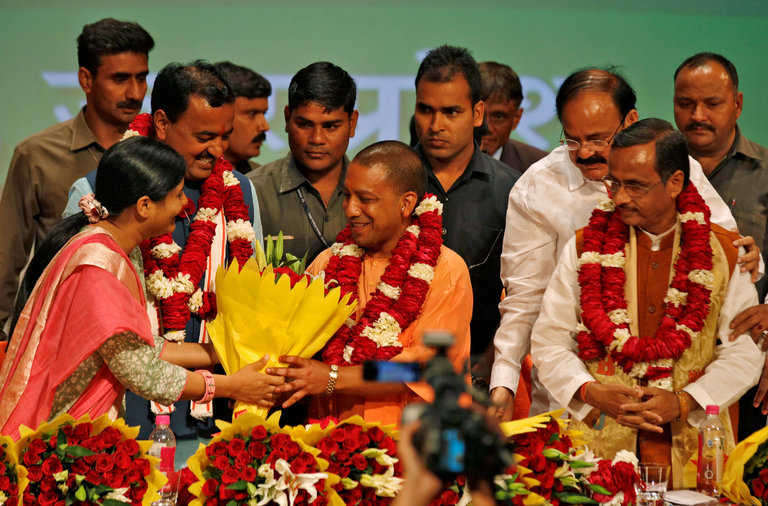 NEW DELHI — India’s governing party on Saturday appointed a firebrand Hindu cleric to lead the country’s most populous state, a turning point for a government that has, until now, steered clear of openly embracing far-right Hindu causes.

The choice of Yogi Adityanath — who has been repeatedly accused of stirring anti-Muslim sentiments — to lead Uttar Pradesh, came as a shock to many political observers here, who have become accustomed to the carefully moderated public positions of Prime Minister Narendra Modi, in line with his projected image as a pro-development leader and global statesman.

Mr. Adityanath has openly called for India to be enshrined as a “Hindu rashtra,” or Hindu nation, and supports the rebuilding of a temple to the Hindu god Ram, also known as Rama, on the site of a razed 16th-century mosque, a project that was halted after it incited bloody religious riots in the 1990s.

With the appointment, Mr. Modi “is unveiling a vision of benign majoritarianism,” said Shekhar Gupta, a longtime editor and political talk show host. “That means it’s a Hindu country, that’s the fact, and we’ll be nice to you if you behave yourself.”

Mr. Adityanath, who is often seen wearing the saffron robes of a Hindu priest, told followers he would focus on Mr. Modi’s economic agenda.

“I am confident that the state will march on the path of development,” he said, in comments carried by The Press Trust of India.

India is 80 percent Hindu, 14 percent Muslim and 2.3 percent Christian, according to the 2011 census.

Mr. Adityanath’s appointment comes on the heels of Mr. Modi’s greatest political victory since 2014. A week ago, his Bharatiya Janata Party won a landslide victory in Uttar Pradesh, which has a population of more than 200 million and was seen as a gauge of Mr. Modi’s chances of winning a second five-year term in 2019.

The selection of a hard-line Hindu chief minister suggests that the party credits right-wing activists for swinging the vote, said Milan Vaishnav, a senior fellow in the South Asia program at the Carnegie Endowment for International Peace.

“The only conclusion one can draw is that he feels the base is mobilized and that they helped deliver this, and that there would be pushback if they did not get something in return,” Mr. Vaishnav said. He added that he was “baffled” by the choice, which shifts attention away from the pro-growth, development agenda that has been at the center of Mr. Modi’s political movement.

“I think it’s a regressive choice, and a lost opportunity for the prime minister,” he said. “This is a huge mandate, a huge victory. But there is going to be a backlash if he doesn’t figure out the jobs question. That’s issue No. 1.”

Party loyalists praised the decision. Some members made the case that Mr. Adityanath’s selection did not represent a departure from Mr. Modi’s 2014 pledge to focus on the economy and create jobs.

Others openly celebrated the advent of a more muscular Hindu agenda.

“Justice to all, appeasement to none,” said Sudhanshu Mittal, a Bharatiya Janata Party leader, in comments to NDTV, a cable news station.

“Appeasement,” in this context, is typically understood to mean policies favoring the rights of Indian Muslims.

“As a devout Hindu sannyasi,” or someone who has renounced worldly things, “he will guarantee that the state doesn’t discriminate, and justice for all,” said Tarun Vijay, a former B.J.P. member of Parliament. He added that as chief minister, Mr. Adityanath “may make jihadi intolerant Muslims learn an alphabet of humanity and accepting differences as an Indian.”

Mr. Adityanath, 44, was born Ajay Mohan Bisht, and studied mathematics before joining the priesthood. He rose to prominence as part of the campaign to rebuild the Ram temple, and has repeatedly been charged with fanning religious tensions.

In 2007, he spent 15 days in jail on charges of inciting riots, The Hindustan Times reported. He was booked again later in the year, when riots broke out after he made a speech. He is still facing trial in the two cases, the newspaper reported.

Mr. Adityanath was a forceful defender of the Hindu mob who lynched Muhammad Ikhlaq, a Muslim man suspected of slaughtering a cow, and argued that Mr. Ikhlaq’s family should be prosecuted for possessing the meat. When some Indians complained that they should not be required perform a “sun salutation” as part of International Yoga Day celebrations, saying it was a religious act, he recommended that those who were offended should “drown themselves in the sea.”

He won his parliamentary seat in 1998, and was re-elected four times.

He has particularly strong support among Hindu priests and seers, who urged the B.J.P. to name him chief minister, saying it would clear the way for the construction of the Ram temple.