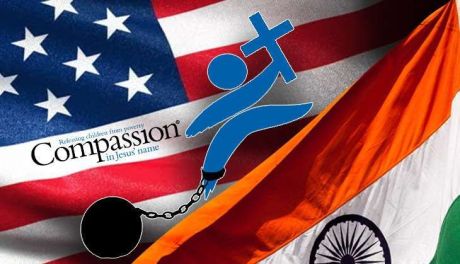 Recently, 107 of you (members of the US Congress, both Republicans and Democrats) wrote to the Indian Home Minister, Rajnath Singh, to allow the American charity, Compassion International (CI) to continue its work in India.

Your missive opens on a warm note: ”As the largest and oldest democracies in the world, India and the US share bonds rooted in political pluralism and respect for the rule of law.” The subsequent sentences, reveal your real intent. “It is with this in mind that we write to express our deep concern over the lack of transparency and consistency in your government’s enforcement of the Foreign Contribution (Regulations) Act.”

“The ongoing case of US-based Compassion International, which will have harmful consequences for many Indian children, has caused serious concern within the US Congress.”

Dear US lawmakers, on the face, your letter is touching, full of concern for the unfortunate destitute children of a faraway developing country. But are you sure that CI’s activities are motivated purely by compassion for the underprivileged children of India? Is there no hidden agenda? What has been the record of CI since it started its operations in India in 1968?

If compassion for the destitute kids was the core of the organisation’s operations in India, it has a lot of work cut out for it in the US itself. In 2011, child poverty in the US reached record-high levels with 16.7 million children living in insecure households, about 35 per cent over the 2007 levels, the second highest relative child poverty rates in the developed world. According to a 2016 study by the Urban Institute, teenagers in low-income communities are often forced to save school lunches, sell drugs or offer sexual favours because they couldn’t afford food. A 2014 report by the National Center on Family Homelessness states the number of homeless children in the US has reached a record high.

Along with poverty, children in your country suffer in broken families as well. There is a divorce every 36 seconds. That is nearly 2,400 divorces per day, 16,800 divorces per week and 8,76,000 divorces a year. As a result, only 46 per cent of the children are living with two parents who are both in their first marriage. While in the early 1960s, babies typically arrived after a wedding, today four in ten births in your country occur to women who are either single or live in with a partner.

Honourable US lawmakers, you will agree that a secure home and strong family help a child cope up with poverty better. In your country, a large number of children suffer double disadvantage. They need enormous emotional support from the society to make up for broken homes, apart from monetary assistance. But CI’s heart does not bleed for these hapless American children. It spends around $50 million annually in India as “humanitarian aid”. Why? Because, CI has souls to save for the Christ in India and the US does not offer any such opportunity, since the destitute there are already Christians.

Dear US lawmakers, CI has been duly investigated by Indian officials, within the framework of our legal system, accountable to our Parliament and Judiciary. Is it fair on your part to interfere in our affairs? CI operated through Caruna Bal Vikas Trust in India. Its child “welfare” activities included holding Christian prayers on a daily basis, celebrating only Christian festivals, offering prizes for recitation of Bible verses and holding “Compassion Young Adult Meet”, where a person gives Christian inputs. Are the CI’s objectives not clear? – The New Indian Express, 1 April 2017