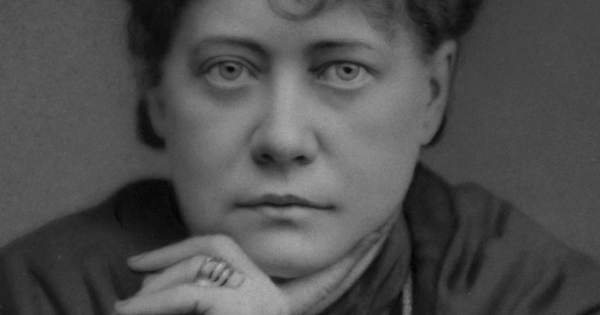 Blavatsky is a name likely few Hindus have heard, she may be better known to some Nazis, but even there she is an esoteric conversation. Who was “Madam Blavatsky” and what connection does she have to both Hinduism and the Nazis?
First let’s get the obvious out of the way, that there has always been an undercurrent in the West, especially among Judeo-Christians and Leftists, to tie the Nazis to Hinduism as to shame the later. The most obvious connection has always been the Swastika, an ancient Hindu symbol which was co-opted by the Nazi Party in a feeble attempt to “Aryanize” their movement.

Another Hindu-Nazi link that our enemies bring forth is the meeting between Subhas Chandra Bose and Adolf Hitler.  Bose was an Indian freedom fighter who was attempting to overthrow British Rule in India during WWII.  Bose was attempting to liberate India from British colonial rule, a rule which was bloodier and more oppressive than almost anything that was going on in Europe at the time, and so he naturally sided with Britain’s enemies.  Bose was not steeped in European politics, he was busy fighting a war on his own soil, this was not likely a deep seated ideological connection. There is also the fact that there had been a Hindu-German Conspiracy going on since WWI, before the rise of Hitler.  Germans and Hindus were natural allies against the British Empire, the Bose-Hitler affair was simply a continuation of this relationship, perhaps without much thought. 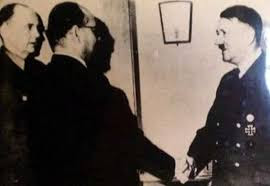 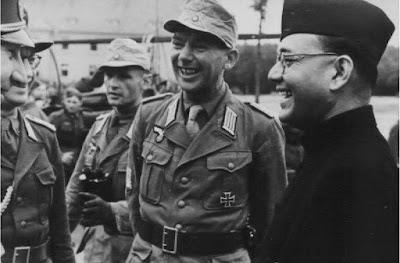 But are these incidents really the foundation upon which Leftists and Christians attempt to build their “Nazis are Hindus” accusation? A stolen symbol and a marriage of convenience are hardly enough to grab the attention of our detractors, however their is a deeper connection, one which is known to some but which is hardly ever discussed, and that is Madam Blavatsky. 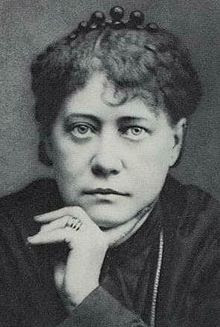 Helena Petrovna Blavatsky was a Russian occultists who traveled to Europe and India around the 1850s. When in India she claims that she was sent to Tibet by a mysterious group called the “Master of the Ancient Wisdom” and when she was there she read a book which only she has heard of called the “Book if Dzyan“.  Upon her return to Europe she used this supposed “Book of Dzyan” to formulate a new religion which she called “Theosophy“. German Indologist Max Müller and others have been skeptical of this “Book of Dzyan”; Müller is reported to have said that in this matter she was either a remarkable forger or that she has made the most valuable gift to archeological research in the Orient. It is obvious from the Theosophist symbol that this religion is an attempt to bastardize Hinduism, Buddhism, Christianity and Western Occultism.

The Theosophist doctrine is vast and confusing, it was laid out in Blavatsky’s magnum opus “The Secret Doctrine” which was a gaseous expansion of her first and distilled work entitled “ISIS Unveiled“. For anyone who has learned the breadth of the religion of Theosophy, it becomes obvious that Blavatsky did nothing but rip off Hinduism and Buddhism, and then sandwiched it in between an absurd account of human evolution and a future which obviously was meant to stroke the confused Occultist-Christian ethos of 19th century Europe.
While Blavatsky hails Hinduism and the Vedas extensively in her work, she claims that she learned from her obviously made up  “Book of Dzyan” that Hinduism in India was basically a mix between two mystical races which never appear in the Vedas themselves.  Blavatsky put forth her theory of “root races” where humanity is constantly evolving to higher planes via some irrational mechanism.  Blavatsky’s theory on root race as it applies to Hinduism is as follows:
This brings us to Blavatsky’s 5th root race which she called the “Aryans”.  According to Blavatsky the Indo-Europeans stretching from India through Persia and into Europe were all extensions of this latest Aryan Race. According to Theosophist doctrine, there was a highly advanced race which lived on an Island nation called “Atlantis“. According to Theosophists, these Atlanteans were much larger and more intelligent than we humans, but they fell into “sin” and thus their civilization began to decline. The history of this decline is so fantastical, it is very hard to believe it would have no record in the Vedas which were supposedly written by Atlantean refugees. Supposedly a war broke out between the “White Magicians” and the “Black Magicians”, the Black Magicians were apparently genetic engineers and homosexuals. This Atlantean war has the details of a Star Wars movie, yet almost none of this can be found in the Vedas.
The story is that as the civilization declined, so did the quality of the race, they transformed from Atlanteans into Aryans, and they became smaller and less intelligent and resembled modern day Indo-Europeans.  Blavatsky says that the first Aryans to leave Atlantis were the Hindus of India who then wrote the Vedas. Isn’t it a little suspicious that the Hindus never mentioned Atlantis and these wars between White and Black Magicians? Later on the other Aryans such as the Europeans left Atlantis and populated Persia, Arabia and Europe. And this is where things start getting even more absurd. Blavatsky obviously missed the naturalistic essence of the Vedas and Hinduism, or perhaps we should say she wanted to.  She needed to flatter the ego of her European audiences, and she did with racial mysticism and a racial prophecy of chosenness. 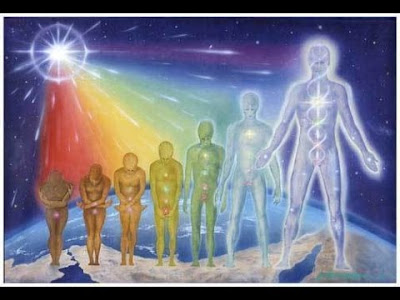 According to Blavatsky’s “Out of Atlantis” hypothesis, the Germanic races were the last Aryan race to evolve, and supposedly the Germanic races would be the foundations for the next root race, the 6th root race. This 6th root race, which was supposed to evolve out of the Germanic people, are said to be psychic, and then this 6th root race will breed a perfected 7th root race who will supposedly be advanced beyond our knowledge and be of “pure spirit”. While Hinduism does teach that it is possible to gains “Siddhis“, above human powers, by becoming aware of the link between your personal consciousness and the universal consciousness, Vedanta, it doesn’t offer a finite racial evolution, the achievement of some perfected 7th race or the exact evolutionary path to achieving this. Blavastsky was obviously playing to Europe’s Christian need for esoteric prophecy and their acquired Judaic taste for chosenness.
Blavatsky’s mystical and “chosen” racial prophecy began to infect Europe and influenced the rise of such movements as Ariosophy, irrationalist and purely racial creeds which sought through different methods and ideas to breed this coming 6th race out of the German people as Blavatsky had taught. Adolph Hitler was known to be an avid reader of the Arisophist publication “Ostara” published by Ariosophist Jörg Lanz von Liebenfels whom Hitler even visited. According to Liebenfels, there was a close affinity between Theosophy and his brand of Ariosophy. In discussing Blavatsky’s work, The Secret Doctrine, he wrote enthusiastically that “she was almost a generation ahead of her time and of anthropology. Today for the first time work on the latest material has brought to light results which show a completely amazing identity with those of the spiritual Theosophist.” It was claimed by a friend that Lanz had direct contact with Blavatsky and her immediate successor as head of the Theosophical movement, Annie Besant. It has also been widely rumored the Hitler carried a copy of Blavatsky’s “Secret Doctrine”.
On a quick note, after WWII ended, one of Hitler’s most avid supporters, Savitri Devi, converted to Hinduism in belief that it was connected to her bastardized Arisophist religion.  She attempted to synthesize Nazism and Hinduism but obviously failed, as she was too wrapped up in Hitler as a Prophet and Germans as the “chosen race” to breed a mystical and unknown 6th race.  She wrote several treatise on Nazism and Hinduism such as “A Warning to the Hindus” and “Lighting and the Sun”  Savitri’s major work on the Egyptian Pharaoh Akhnaton as A Son of God: The Life and Philosophy of Akhnaton, King of Egypt was originally published by the Theosophical Society 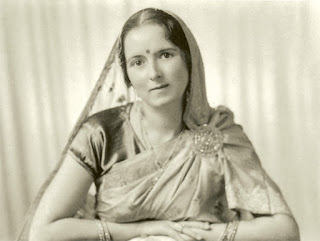 The long and twisted tale which links Hinduism and Nazism all leads back to a charlatan who called herself “Madam Blavatsky”, even though she was no madam.  Blavatsky was a forger who made up a fake religion of Theosophy which stole Hinduism but then tailored it to Judeo-Christianized Europe’s need for mystical prophecy and racial chosenness. The Nazis are just another bastard of Abrahamism, like the Communists before them.  They cannot come up with anything themselves, so they steal from the Pagans and then adulterate it to fit their inferior intellects. You don’t need blood mysticism and self serving prophecy to elevate your race, what you need to do is drop your Judeo-Christian-Leftist underpinnings and accept the Vedas for what they are, a naturalistic ethic which apply to all.
Source: aryahinduparty