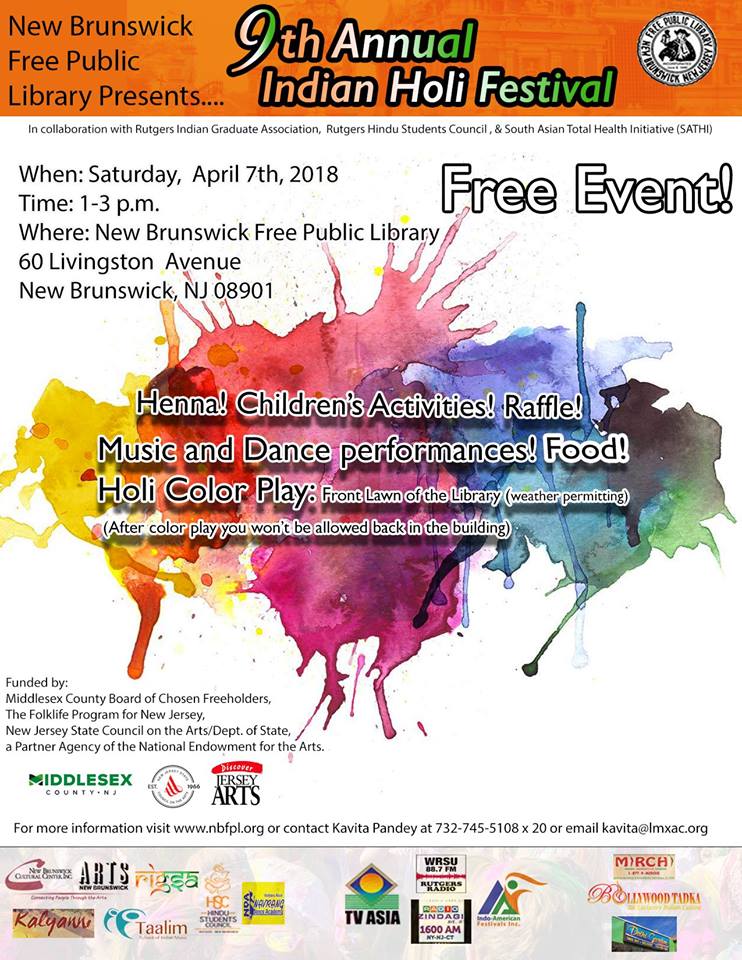 There is no charge to participate in the festival which includes color festivities using dry and wet colors, mehndi (henna), music, dance, food, etc. “You will not be allowed back in the building after color play”, the announcement points out.

Commending NBFPL for celebrating Holi, distinguished Hindu statesman Rajan Zed, in a statement in Nevada today, termed it as a step in the positive direction, and urged all the public libraries in New Jersey to celebrate various Hindu religious festivals like Diwali, Holi, Krishna-Janmashtami, Maha-Shivaratri, Navaratri, Ramnavami, Ganesha Chaturthi, Hanuman Jayanti, etc.; in view of presence of substantial number of Hindus in the state.

Awareness about other religions thus created by such festival celebrations like NBFPL Holi, would generate better understanding among various religious communities of New Jersey and result in more harmony, Rajan Zed, who is President of Universal Society of Hinduism, added.

Joie de vivre festival of Holi welcomes the beginning of spring and starts about ten days before the full moon of Phalguna. The ceremonies include the lighting of the bonfires, during which all evils are symbolically burnt. Holi also commemorates the frolics of youthful Lord Krishna; celebrates the death of demoness Putana, burning of demoness Holika, and destruction of Kama by Shiva. Holi fell on March two this year.

Hinduism, oldest and third largest religion of the world, has about 1.1 billion adherents and moksh (liberation) is its ultimate goal. There are about three million Hindus in USA.

NBFPL traces its roots back to 1796. Dr. Robert Belvin and Beth Binde are Director and Trustees President respectively. Jim Cahill is the Mayor of the City of New Brunswick.