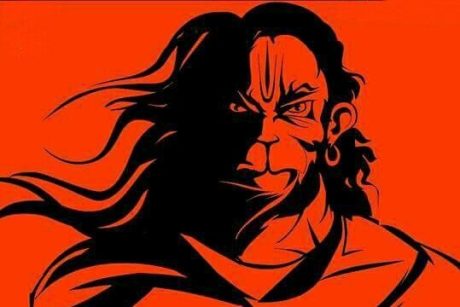 Hanuman endows us with the atma-shakti or self-power through which we can realise our higher potential and accomplish what is magical. He grants us fearlessness, self-confidence, daring and boldness to attempt the impossible and succeed. – Dr David Frawley

Hanuman endows us with Self-power

Hanuman is the great hero of the Ramayana, the wonderful story’s most fascinating character. Though having the form of a monkey, he is said to be the greatest sage, yogi and devotee. What is the inner meaning of this magical figure?

Hanuman is portrayed as the son of Vayu, the wind God. This explains his speed of movement, his power to become as small or large as he likes, and his incredible strength. But there are many other yogic secrets hidden behind his symbolism.

Today our world prides itself in a new information technology, with a rapid speed of data, calculation and communication. Modern science has learned to tap the latent powers of nature to transform our outer lives. At a cosmic level, there is a deeper energy that runs everything in the universe.

This is called “Vayu”, which is not just a force of the wind or air element, but the kriya shakti or power of action that governs all inanimate and animate forces in the universe. It is the source of all cosmic powers, not just wind as a force in the atmosphere.

Vayu manifests as lightning or propulsive force (vidyut). This is not just the lightning that arises from clouds but the kinetic energy that permeates all space and time. Vayu is the energy operative from a subatomic level to the very Big Bang behind the universe as a whole. Tapping into that supreme cosmic power is what the methodology of Yoga is all about.

Vayu at an individual level becomes prana, which is not just the breath but the life force that holds all our motivations and sustains our inner strength and will power. It is not just our physical prana but the prana of mind and ultimately of consciousness itself.

Hanuman represents the cosmic Vayu manifesting through our individual prana. This occurs when we dedicate our lives to the Divine Self or Rama within us, letting go of our attachment to the external world of appearances.

Hanuman endows us with the atma-shakti or self-power through which we can realise our higher potential and accomplish what is magical. He grants us fearlessness, self-confidence, daring and boldness to attempt the impossible and succeed.

The cosmic Vayu is inherently a force of intelligence, linking us to the cosmic mind that aligns all minds together in an interconnected network of thought. That is why Hanuman is the most wise and observant, holding the power of buddhi, the discriminating inner intelligence that reveals the highest truth.

Hanuman and the power of Yoga

This cosmic Vayu is the true power of Yoga. It gives flexibility of body, boundless vitality, indomitable will power, and concentration of mind. Our highest prana is to reach out and merge into the immortal Prana, which is to dedicate ourselves as Hanuman to Rama.

Hanuman grants all yoga siddhis extending to the highest self-realisation, allowing us to master all cosmic energies.

Hanuman is the conduit of the power of Rama as the universal Self. Rama represents the Self who guides all nature—through which the wind blows, out of which the Sun and Moon move, which holds the Earth in place through gravity.

The yogi works through that cosmic Vayu and universal Prana, in attunement and harmony with the whole of life.

The true bhakta or devotee surrenders to the Divine will which is the motivating force of Vayu.

Vayu’s vibration is Om or Pranava, the primal sound behind all creation and the source of all mantras.

The Upanishads teach us that Vayu is the directly perceivable form of Brahman, the Cosmic Reality.

To become Hanuman we must awaken to our inner nature as a portion of cosmic consciousness. Each one of us has the power of the entire universe within us.

But we can only recognise this when we become aware of our inner Self, what the Upanishads call the antaryami or inner controller. Hanuman is the force of Rama working within us, the strength of our innermost Self that is the ruler of all.

It is Hanuman alone who can discover Sita Devi. Sita represents the deeper Self-knowledge or Atma Vidya, through which Rama or the Self can be fully realised.

Sita is also the feminine principle of space and receptivity that the cosmic Vayu depends upon. Without Hanuman, we cannot find Sita, and Rama cannot fulfill his destiny of the highest dharma.

Let us not forget our own deeper cosmic energy in our fascination with the latest information technology that is but its shadow. Hanuman reveals to us the way of transcendence.

» Dr. David Frawley (Pandit Vamadeva Shastri) D. Litt., is an acclaimed author and teacher in the Vedic tradition. He includes in his wide scope of studies Ayurveda, Yoga, Vedanta and Vedic astrology, as well as the ancient teachings going back to the Rigveda.