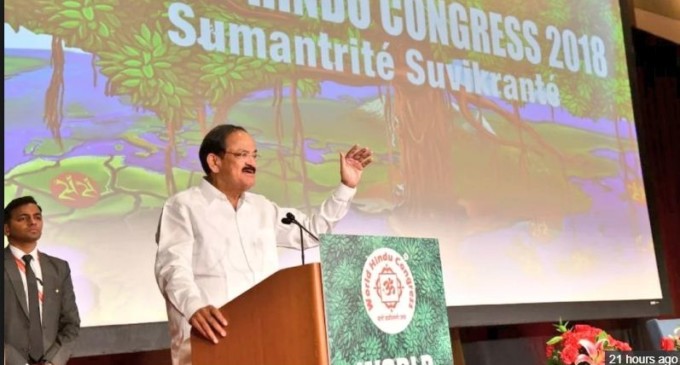 INDIA, September 15, 2018 (India Post): India’s Vice President Venkaiah Naidu renewed Swami Vivekananda’s message to the World Parliament of Religions in 1893 and appealed to the second World Hindu Congress delegates to follow the ideals of the great saint of India. Naidu was delivering the keynote address at the concluding session of the congress, on the eve of the 125th anniversary of the Hindu monk’s exposition of Hinduism to the Western world in Chicago on Sunday. Swami Vivekananda was the embodiment of Hindu culture. “Let us rededicate ourselves to the thoughts (of Vivekananda) for the greatness of mankind,” Naidu said.

Naidu peppered his speech with generous Sanskrit and Telugu quotes. He told the gathering though he was not in politics anymore, he was glad to come to Chicago and felt it was his duty to attend the great event happening in the name of Swami Vivekananda. Naidu extensively referred to Swami Vivekananda’s epoch-making address, which described Hindu philosophy as “discovering of spiritual well springs” that have sustained the world for many centuries. The philosophy of tolerance and acceptance of all religions, was an essential part of the timeless, eternal, holistic, integrated and universal worldview of Hinduism. Naidu elaborated on some of the essential elements of Hinduism namely the breadth of its vision in treating the world as one family, tolerance and acceptance of plurality, unity in diversity, and that truth is one though wise men describe it in different ways.