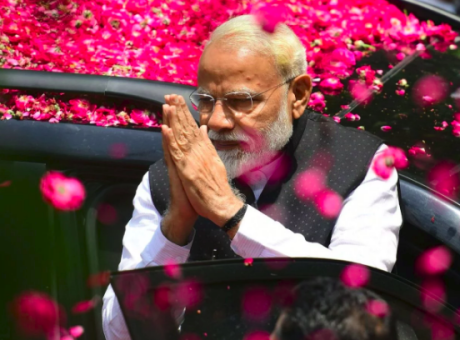 Election 2019 marks a watershed in India’s politics. It heralds the dawn of a resurgent India rooted in its civilisational ethos, a new brand of voter who can see through pretenses and a new kind of politics centred on performance. – Punarvasu Parekh

India is firmly set on the road to become a modern Hindu Rashtra. That is the most important message from the Lok Sabha elections 2019. Seven decades after independence, Hindus are coming into their own. It is not the end of their troubles, but it marks the beginning of the phase in which they are taking their destiny in their own hands. If that is “communalism”, they could not care less.

Election 2014 announced that Hindu nationalism had arrived on India’s political scene. 2019 proclaims that it is here to stay.

If there is any doubt about this interpretation of the voters’ verdict, results of three parliamentary constituencies should clinch the issue: In Bhopal Sandhvi Pragya Thakur trounced Digvijay Singh, one of the architects of the “Saffron Terror” bogey; In Begusarai, the “Bharat Tere Tukde Tukde” gang leader Kanhaiya Kumar suffered an ignominious defeat at the hands of BJP leader Giriraj Kishore, often associated with provocative statements; deep down in Kerala, Congress, which played cards cleverly in the campaign with the faithful and temple worshippers, retained Pathanamthitta in a fierce triangular fight. In fact, the ruling LDF was routed as its votes shifted away in a reaction to its stance on Sabarimala controversy.

In a very real sense, election 2019 marks a watershed in India’s politics. It heralds the dawn of a resurgent India rooted in its civilisational ethos, a new brand of voter who can see through pretenses and a new kind of politics centred on performance.

The opposition deployed all the time-tested techniques to tar the prime minister and trump his Sanko Panza: caste arithmetic, fear mongering among Muslims and Christians, hate mongering by self-styled liberals and secularists at home and abroad, populist giveaways and most vicious personal attacks on the prime minister. It grandly pointed finger at the economic record of the government, forgetting in the process that the remaining three fingers were directed against it, literally and figuratively. The opposition leaders thought they were being very clever in doing all this. They did not realize that they had no credibility, something that Modi had in ample measure.

As the trends became clear during the campaigning, and exit polls confirmed what was widely believed on the street (Modi’s return with a reduced majority) the opposition parties pulled out all stops to delay, dispute and hopefully delegitimize the verdict. The Supreme Court was moved several times, neutrality and competence of the election commission was called into question, doubts were cast on EVMs and a move was afoot to request the president to depart from the convention of inviting the largest single party or pre-poll alliance to form the government. As opposition leaders tried one ploy after another, they came across as petty schemers out to grab power by hoodwinking the people so that they could plunder the country at will.

What one the day for Modi was clear from the start: no-nonsense approach to national security, no compromise with national pride and, last but not the least, delivery of social welfare schemes to the needy cutting across caste and community barrier. Shrill incessant negative propaganda could not dent the credibility earned by genuine work on the ground. With his simple lifestyle, the tremendous amount of the work that he put in and his incorruptibility, Modi stood head and shoulder above other political leaders.

What now? For one, the Family has reached the end of the road. Rahul Gandhi made pathetic though strenuous efforts to make a Bofors out of Rafael. None bought it. Priyanka Vadra, widely regarded as Congress’s  trump card, fared no better than her brother. Unless the Congress junks the family with all the attendant risks, it is destined to irrelevance.

Secondly, marginalisation of Muslims is nearly complete. Even partial consolidation of Hindus is enough to destroy the power of the Muslim vote bank. Modi has shown once again that it is possible to win elections at the national level, without wooing Muslims as Muslims. This does not mean that they will become irrelevant; but they will have come to terms with the growing assertiveness of the Hindus—something they have studiously avoided so far. Both the communities will continue to co-exist but on terms far less onerous for the Hindus.

Finally, the Leftist ideology and parties are in a state of terminal decline. Their numbers have dwindled to single digits in Lok Sabha, their policies do not sell with an aspirational electorate and the young generation has no patience with its arcane and outdated theories.

With three major anti-Hindu forces—the influence of the Family, power of Muslim vote bank and Leftist ideology in the decline, Hindus are increasingly coming into their own. On ground, this will be reflected in a firm, clear sighted no-nonsense approach to issues related to national security and care for civilization heritage. Terrorists and their sympathizers, separatists in J&K or Bangladeshi infiltrators or local Muslim bullies can no longer expect the kid-glove treatment they are used to.

On economic front, we shall see more liberal market friendly policies and a stress on ease of doing business. In his address soon after the drift of the results became clear, Modi referred to the business community as those who help in removing poverty. We can expect more unleashing of the hidden talent and energies of the people. This is in stark contrast to the suspicion and despise that Nehru and his progeny entertained towards private enterprise.

We may wish that such a turn of event should have come at some decades ago. But Kalpurush moves at his own speed. He cannot be pushed from behind nor can his march be stopped from the front.

» Punarvasu Parekh is an independent senior journalist in Mumbai.