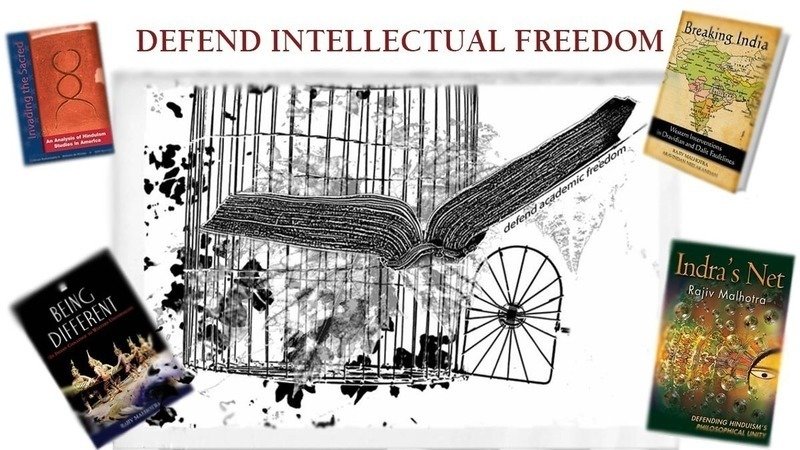 Intellectual disagreements must be resolved through debate with all parties present and Mr. Malhotra has publicly invited his opponents to debate. We should stop this practice of censorship using power plays. It is against the best interest of the publishing industry and all lovers of truth.

“If liberty means anything at all, it means the right to tell people what they do not want to hear.”

When it comes to scholarship on India’s ancient traditions, there is a coterie of scholars who, in a one-sided display of power, cry foul at any attempt to de-colonize the discourse. They use underhanded tactics to muzzle intellectual pioneers like Rajiv Malhotra whose work is based on indigenous and not Western perspectives. They have been engaged in a smear campaign against him for quite some time, dishing out a series of flimsy allegations in an attempt to intimidate him and others into abandoning their work.

The most recent move is a well-orchestrated campaign by a team of Indian leftists aligned with Western polemicists to slander the credibility of Rajiv Malhotra’s path-breaking scholarship. Rather than engaging the substantive merits of his arguments head on, these scholars attempt to divert and deflect attention through silly and unsubstantiated allegations. They would rather silence him than engage him in an honest and open debate.

This latest move is being timed to coincide with Mr. Malhotra’s latest book on the defense of Hinduism and Sanskrit from an indigenous perspective. They have petitioned his publisher HarperCollins to drop his books by generating a spurious scandal which they can use to divert attention away from the important issues he has raised.

Their petition rests on a false and baseless allegation of plagiarism in his earlier book, “Indra’s Net”. Their case is built on exaggerating a few minor copyediting oversights in order to undermine the enormous credibility and following Malhotra has garnered over the years on the strength of his well-researched critiques of the partisan agendas of leftist scholars and their patrons. A presentation of the ideas contained in his new book at the recently concluded 16th World Sanskrit Conference in Thailand received enthusiastic reception from Sanskritists around the world. However, a number of Western scholars were disturbed as they thought this new book would threaten their life’s work, because the book challenges the very epistemic foundations of Sanskrit and Indological studies in the West.

How convenient that these same scholars (and their disciples) suddenly claim to have discovered alleged “plagiarism” in Indra’s Net (which has been out for 1.5 years with no complaints) and have now petitioned the publisher. Their complaint is of a pedantic, nitpicking nature, made with malicious intent, hoping to mislead and prejudice people based on the presumed “authority” of the petitioners. This is nothing but a naked power play to quash down the voice of an independent scholar whose views make a small coterie of scholars uncomfortable.

These accusations are completely false and unsubstantiated.

The Western hijacking of traditional knowledge has been an old enterprise and is best epitomized by the cover of Malhotra’s new book: a wall carving in Oxford depicting the 18th century Sanskrit scholar, Sir William Jones, seated high on a table with Indian pundits on the floor as though they are students trying to grasp the high wisdom he claims to give them. The quote below the picture says it all: “He gave the Hindus and Mohammedans their Laws.”

Scholars like Rajiv Malhotra are effectively challenging well-entrenched and all-pervasive intellectual power structures through painstaking high-quality research. This has required rare intellectual courage, academic rigour and emotional resilience because he has faced enormous hostility, ridicule and political abuse from those ensconced in the high citadels of academia. His work is a sincere attempt to present an indigenous view of Indian history and identity formation in the subcontinent. All he seeks is a level playing field for voices that speak from the Indian intellectual traditions to represent their heritage. Since this tight-knit cartel of academics feels threatened by the challenge he poses, they are indulging in outright calumny to frighten leading publishers from touching his books. This can only be described as intellectual terrorism and imposition of censorship on a dissenting voice through mafia-like tactics.

We sign this petition to uphold the integrity of a civilization which has gifted the world with many precious gems, such as Sanskrit and Yoga, and because we support Rajiv Malhotra as a champion of the “open architecture” of Hindu knowledge. We endorse his well-researched books and the many fresh insights he offers through his lectures worldwide. We are confident that his forthcoming book, ‘The Battle for Sanskrit’ will be a major contribution to Indology and provide valuable insights into the forces that have tried to enslave the Indic civilization.

Most of all, we reject the politically motivated false allegations that are being hurled at him by a group with a long track record of blocking voices that challenge their hegemonic discourse. The attached point-by-point rebuttal is by a team of established independent scholars showing the allegations against Mr. Malhotra to be false.

Throughout his writings, Rajiv Malhotra has consistently been an exemplar of rigor, has created a public record that is open, and has invited debate from opponents. Hence, it is vital for his supporters and, in fact, all those who cherish intellectual freedom, to sign this petition.

Call to Action: The undersigned petitioners hereby ask publishers to stand firm against this assault on intellectual freedom. In particular, the publishers must not bow to any demands to issue apologies as any such apologies are unwarranted and must not succumb to pressure to withdraw any of Mr. Malhotra’s books.

LETTER TO
Publishers of Rajiv Malhotra’s books
Do not yield to mafia pressure tactics that seek to compromise intellectual freedom. Make the slight modifications in the book (if required) to clarify any doubts in the best interest of fair play.
Source: change.org