The unreported truth of the Amarnath Yatra attacks

The attacks on the pilgrims of the Amarnath Yatra have been shockingly blacked out in the ‘mainstream’ media.

Even as there is a gradually growing national outrage over the attacks on the pilgrims of the Amarnath Yatra at Baltal, there is fresh shocking news of the local J&K police being hand-in-glove with the miscreants who attacked Hindu pilgrims.

It has come to light that the devotees going on this year’s AmarnathYatra have suffered not only at the hands of local miscreants, but even the local Kashmir police. Apparently, even Kashmiri police personnel had little qualms in joining the rioters who had a free hand in heaping indignity on the hapless pilgrims. Yatris Pradeep Kumar, Manik Jaitley, Krishna, Prem Salwan, Happy Salwan and Deepak are among the lucky few who somehow managed to escape the miscreants and have met union cabinet minister Anil Joshi to narrate their harrowing experiences and a true account of what actually happened.

The pilgrims’ eye-witness accounts provide ample evidence that the attacking miscreants had the full backing of local police in J&K. on the day of the attack, the police had already asked the army to shift to upper ranges on the pretext that they would take care of the Yatra’s security, and then immediately provoked the local goons to attack the Yatra camps and langars, as early as 8 am in the morning. The pilgrims were caught completely unawares as stones began raining on the Yatra. The pilgrims have alleged that sacks of stones had been kept in readiness on ponies, which has been transported to the place well in advance, as the pony-operators are from the local communities. Even more shocking is the fact that even local shopkeepers joined the attackers in showering stones on pilgrims, who were trapped from all sides.

The stoning continued for more than two hours, with the J&K police even joining the miscreants in looting pilgrims’ belongings and mobile phones and smashing many pilgrims’ cameras. Male pilgrims braved the onslaught to protect the women and children by shielding them with pillows. The terrified women and children were screaming even as the attacking mob went on a rampage. The attackers were driven from the scene only after the army arrived at the scene after about two hours. As always, it was the Indian army which turned out to be the pilgrims’ savour. 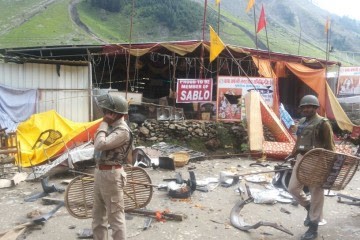 The pilgrims further revealed that the J&K police and miscreants were vying with each other hurling obscene expletives at women pilgrims. Every bhandara (cooking camp) traditionally houses a small temple whose idols and Shivlings were desecrated by hurling shoes at them. Apart from looting of the Yatris, women’s clothes too were not spared and snatched and strewn all over the place.

According to reports, the miscreants even urinated into the utensils used for cooking food at the langar and also into the havan kund (sacrificial altar used to lit sacred fire for performing a yagna). All this happened with the local Kashmir police either looking on as amused spectators, or worse, joining their brethren in this vile attack on the Yatra’s devotees and outraging their religious sensitivities.

Worse was to come. The J&K police, not satisfied with looting, also aided their local brethren in setting the yatris’ tents afire. Pilgrims attempt to protect themselves and women and children were mercilessly lathi-charged by the police, apart from having to somehow fend off the attacking miscreants. In fact, the J&K police were openly exhorting the attackers, “Loot whatever you can, even their (pilgrims’) offerings”. The gas cylinders in the tents now on fire soon exploded, forcing the Yatris to run for their lives. The brutality of the police and miscreants did not end there. After looting the Yatris belongings and loading their ponies with as much stuff the animals could carry, they poured water on the remaining food, rendering the flour and dal meant for cooking totally useless. The miscreants then showed their real nature by urinating in the havan kund and trampling on the images of gods and goddesses.

Were the attackers done yet? Not by a long shot. They dispersed raising slogans of “Kashmir hamara hai” (Kashmir is ours) and “Pakistan Zindabad”.