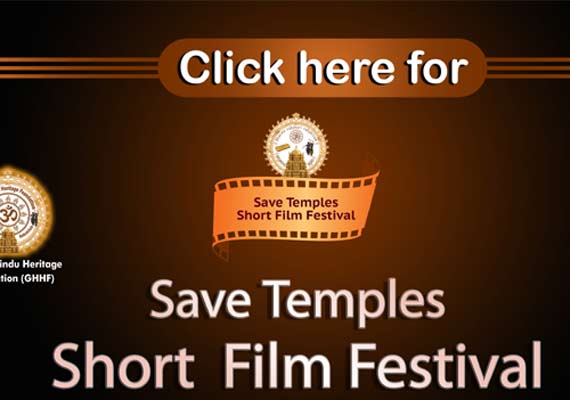 Hyderabad:  A unique international film festival here brought into focus the dilapidated condition of Hindu temples in India, highlighting problems like corruption, mismanagement, encroachments, financial problems faced by priests and erosion of traditional rituals associated with worship. Aimed at creating awareness about the need to save temples, the three-day festival which concluded Sunday saw the screening of 40 movies from different parts of India and countries like Mauritius, Denmark, Nepal, Sri Lanka, Britain and the United States. The first-of-its kind festival was organised by the Global Hindu Heritage Foundation (GHHF), an initiative launched by a group of Indian Americans to protect temples in India. “We want to make people aware of richness of temples and the need to address issues related to their protection, annadanam, gomata and other aspects of temples,” Velagapudi Prakasarao, founder of the foundation, told IANS. An Indian American who started the foundation in 2006, Prakasarao attributed the problems faced by the temples, especially in southern India, to the government control over them. Unlike in the north where only major temples are under the government, in the south all temples earning Rs.50,000 ($825) come under the Endowments department. “Christians and Muslims can operate their places of worship independently, but not Hindus. We want to be treated like any other religion,” said Prakasarao, a former head of the department of sociology and criminology at Jackson State University, Mississippi. Seeking repeal of the Endowments Act, his organisation first wants to build a strong case by proving that it is responsible for the damage to the temples. “This is the first step. We will hold such festivals every year not just in India but also in other countries, especially in the US as Telugu NRIs are keen to contribute their mite for this noble cause,” Gazal Srinivas, a popular Telugu gazal singer and the brand ambassador of the save temple movement, told IANS. The singer said the short films and documentaries screened during the festival not only depicted many problems faced by the temples but threw up ideas how they can be tackled. “There is corruption in temples from the entry ticket to the prasadam. It is because they are under the endowments department,” said Srinivas, who holds a Guinness World Record for singing in the most languages at one concert. “We want governments to hand over all temples to peethadipatis (mutt heads) because they can’t be maintained by employees. The management has to be in accordance with Vedas and Agamashastras. The peethadipatis should be made CEOs of these temples. They are already running several temples without corruption,” he said. Srinivas is worried that it is not just the structures of the ancient temples which are under threat due to neglect and encroachments but the temple culture itself is getting eroded. “Many priests are leaving their profession because of financial problems. Their children are not interested in the profession. The situation is so pathetic that if nothing is done temples may close down,” he said. “I think after 30 or 40 years robots will do archana (rituals). Many temples have already removed mangalavadhyams (musical instruments). They are playing CDs for Suprabhata seva and other sevas,” he rued. Srinivas hoped that the festival will inspire people beyond caste and religion to come forward to protect heritage and culture of this country. He said the films highlighted the importance of temples, which are much more than mere places of worship. A short film “Maa” underlined the need to protect cows. “Temple Treat”, a film by Matiur Rahman of Delhi, depicted how the sculptural art at a few famous temples of Bhubaneswar including Lingaraj and Parsurameswar is in a deplorable condition. Rahman, whose films focus on scientific aspects, told IANS that he plans to make a few movies on ancient and medieval temples and, specifically, the science and technology of that era which had gone into building temples. “The temples were built according to perfect formulas indicated in Shilpa shastras (an umbrella term for numerous Hindu texts). I am looking at temples from the point of view of science and technology; how Shilpa sastras hundreds of years back gave us the formula of building temples which are earthquake resistant,” he said. Lohit, another filmmaker, screened four films highlighting different aspects of the temples. “There is a need for people to understand the significance of temples. They help people socialise, learn values and get positive energy to move forward,” Lohit told IANS. Annamalaiar Arapanikuzhu, a group from Tamil Nadu, showcased its work of cleaning the temples. Headed by V. Ramachandran, a bank employee who took voluntary retirement to dedicate himself to the cause, it has so far cleaned 60 temples. “We have students, retired employees and peons to executives. There is no other place where judges, doctors and sweepers work together and do chit chatting. For them, the lord is the boss and they are servants,” he said. “People go to temples for mere formalities. They lack the religious spirit. Even the puja practices are not conducted as per shastras because the priests are salaried employees and lack spirituality,” said Aksh Goyal of the Hindu Jana Jagran Samithi, which presented a short film on the positive energy in temples.