Panaji : Hindu Mahasabha’s Goa Division has opposed anti-Hindu film Elizabeth Ekadashi. Other pro-Hindu organizations like Hindu Janajagruti Samiti (HJS) have already opposed this film earlier. Now, Hindu Mahasabha – Goa Division will join other pro-Hindu organizations in opposing the film Elizabeth Ekadashi. This information was given by Shri. Shivaprasad Joshi, the President of its Goa Division through a press release. It has been stated in the press release that Hindu Mahasabha was established by Hindu Hriday-samrat Swatantryaveer Vinayak Damodar Savarkar for the only purpose of protecting Hindus’ interests and their empowerment. Hindu Mahasabha has been working together with such organizations and people with similar ideology, for Hindutva.  This film not only  denigrates Deity Shri Vitthal revered by all Hindus, but also pilgrimage of Pandharpur undertaken by Warkaris with so much of devotion. Inclusion of objectionable scenes and dialogues while showing Ekadashi ritual and observance etc. are deplorable acts. The film is sending a wrong message all over the country. Today, people think about Pandharpur with devotion but due to this film, they could be misled. Hindus lack Dharma-shikshan; therefore, they are indifferent towards incidents which insult their Deities, Dharma-shastra and seats of worship; moreover, such things causing harm to Dharma are supported in the name of art. Some of the members of Hindu Mahasabha have taken a wrong stand and are supporting the film; but supporting such incidents of causing harm to Dharma, means compromising with Dharma and it will never be approved by Hindu Mahasabha. Hindu Mahasabha will always be with other pro-Hindu organizations for protecting Hindutva.

Devout Hindus should exhibit such promptness and unity against every attack on Dharma !

Pune : Deity Vitthal revered by whole of Maharashtra, Warkari Sampradaya and methods of worship of Hindus have been ridiculed in the film Elizabeth Ekadashi. This controversial film was slated to be shown on 24th November in a renowned school; but few alert child-seekers of Sanatan explained to their teachers about denigration in this film and later, even parents learnt about the matter. Alert parents contacted school management and demanded that the film should not be shown to students. As such, the show was cancelled taking note of parents’ demand so as to avoid hurting religious sentiments of Hindus. A notice to that effect was put up on the school notice board.

Representation submitted to theatres against screening of film ‘Elizabeth Ekadashi’

• How many Hindu theatre owners show such promptness ?

• With such devout theatre-owners, nobody will dare to denigrate Hindus’ Deities ! 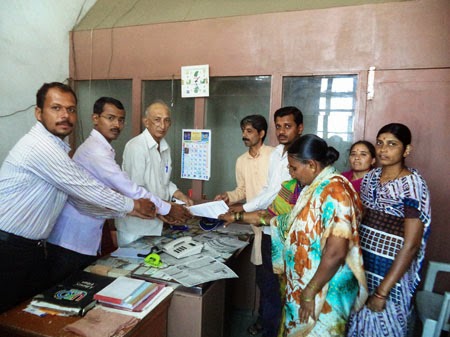 When explained about objectionable scenes from this film, Shri. Bohari said, “I will stop screening of this film if it is hurting religious sentiments of people. Had you come during the first show of the film, I would have stopped even that show. I am also a devotee of Deity Pandurang and have this theatre with His grace. I will stop shows of this film from today, even if I have to bear loss.”

Shri. Bohari immediately called up ZEE Media and stopped the shows by forwarding to them HJS letter through email. He even removed the posters of this film. (How many Hindu theatre owners show such promptness ? With such devout theatre-owners, nobody will dare to denigrate Hindus’ Deities ! – Editor, Dainik Sanatan Prabhat)

Representation submitted to theatre-owners at Pune to cancel shows of the film !

Pune (Maharashtra) : HJS submitted representation to many theatre-owners to cancel shows of Marathi film Elizabeth Ekadashi; as Deity Vitthal revered by all Hindus, Warkari Sect, custom of observance of Ekadashi ritual all have been deliberately insulted in this film.

2. Managers of 2 theatres in Sinhgad Road area were also given such representation : Manager Shri. D. B. Kumbhare of City Pride and Shri. Bhise, owner of Fun Time theatre. They promised to convey sentiments of Hindus to the film Censor Board.

Shiv Sainik, Hindutva-vadis and Warkaris warn to stage agitations if legal action is not taken promptly

Hindus should pursue the matter until suitable action is initiated against such anti-Hindu film !

Manchar (Pune, Maharashtra) : A complaint has been lodged with Manchar Police Station on 23rd November against Marathi film ‘Elizabeth Ekadashi’ for the disgraceful denigration of Deity Vitthal, observances like Ekadashi, pilgrimage to Pandharpur and Warkaris etc. in the name of entertainment. Police Inspector Mohan Jadhav of Manchar police station promised to take action after discussing the issue with his senior officers.

1. In the film Elizabeth Ekadashi, Deity Vitthal has been shown on a bicycle and Queen Elizabeth on brick. A devotional song has been shown in perverted manner. In one scene, a prostitute is shown as claiming that the pilgrimage turned out to be fruitful for her.

2. Religious sentiments of devotees have been hurt due to these things and Warkaris have staged agitation against this film.

3. Warkaris staged demonstrations against Paresh Mokashi, the Director of the film; but police didn’t take note of it; therefore, a complaint has been now lodged with Manchar police station against the film by Hindutva-vadis.

4. Hindu ways of worships have been deliberately insulted through this film; therefore, cases should be filed against the producers, writers, script-writer, distributors, director, actors and all others who are associated with them, says the complaint.

Hindutvavadis present while lodging the complaint

What is the use of such rulers who force Hindus to stage agitations when their Deities are being denigrated ? 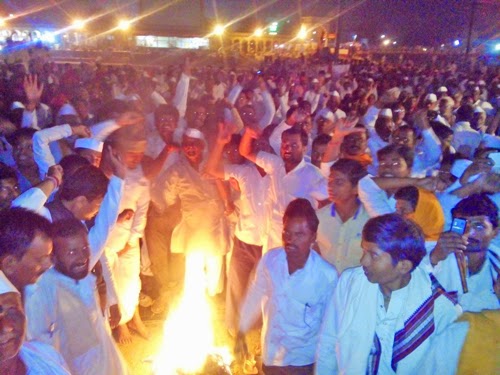 Srikshetra Alandi-Pune (Maharashtra) : There is blatant denigration of Sri Vitthal, the Deity worshipped by whole of Maharashtra, observance of Ekadashi rituals, pilgrimage of Pandharpur and Saints in the Marathi film ‘Elizabeth Ekadashi’. Enraged Warkaris, therefore, staged demonstrations by putting up an effigy the movie’;s Director Paresh Mokashi, hitting it with shoes and later burning that effigy. They also demanded Paresh Mokashi’s arrest and boycott of the film; raising slogans while displaying placards. Warakaris have warned to intensify their agitation if their demands were not fulfilled and declared that the agitation would go on till the film was banned.

Thousands of Warkaris held keertan on the bank of River Indrayani on 20th November on the occasion of ‘Samadhi-Din’ of Sant Dnyaneshwar Maharaj; after which a meeting of Warkaris was convened to protest against the film. The protestors was addressed by H.B.P. Shyam Maharaj Rathod, Rashtriya Yuva Keertankar. He created awareness amongst Warkaris about denigration of their seats of worship taking place through films. Objections raised by Warkaris regarding the above film

1. There are 24 types of Ekadashi-observances prescribed for worship of ShriVishnu but by adding 25th Ekadashi in the name of Elizabeth, religious sentiments of Warkaris have been hurt.

3. Saint Kanhopatra was a ‘Ganika’. While explaining the word, child artists from the film make mockery of the word leading to mockery of Saints.

4. It has been shown in one scene that a character in the film says, the pilgrimage of that year turned out to be quite beneficial for a woman working as a prostitute. The character claims that previous year’s pilgrimage was not so profitable as there was famine; thus advocating for prostitution. In a Marathi play titled ‘Thararali Veet’, it was shown that prostitution trade goes on during pilgrimage of Pandharpur; so Warkaris had opposed that play and it was banned by the State Home Ministry.

Now, once again, image of pilgrimage and Warkaris has been maligned; thereby provoking Warkaris.