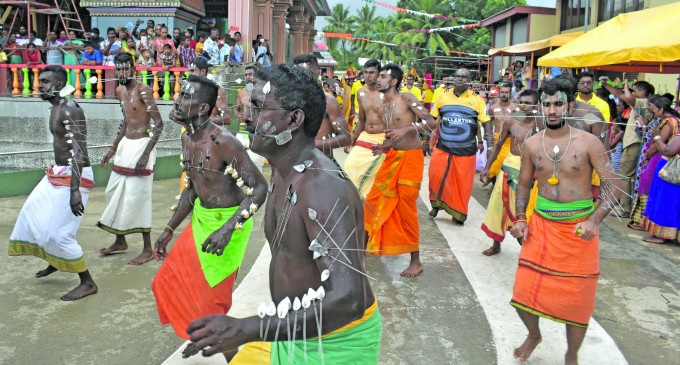 Arvind Nair (nearest to the camera) takes the lead during the festival at the Sri Siva Subramaniya Swami temple in Nadi yesterday. Photo: WAISEA NASOKIA

Rain and water cuts in Nadi failed to dampen the spirit of local and international Hindu devotees at the 92nd Vaarshika Thaipoosam Thirunaal Festival in Nadi yesterday.

The 10-day annual event, mostly for those with South Indian ancestry, ends today at the Sri Siva Subramaniya Swami Thiru Kovil temple in Nadi – the largest Hindu temple in the southern hemisphere.

The devotees from Suva took the centre stage in a spectacular ritual where they pierced their bodies with Trisul (metal rods). A big crowd watched the proceedings.

Temple acting manageress Sandhiya Krishna said: “This is the second last day of the festival and Suva Sangam brought their devotees to perform the ritual.

“We had over 4000 in the crowd including locals and those from abroad having links to Fiji. Interestingly, rain or the water cut was not able to hold the people back from attending.

“The committee has strategically planned for this festival. We got seven extra water tanks to meet the needs of the people.”

Ms Krishna said the festival was a celebration of the victory of good over evil. Devotees offer prayers to Lord Murugan to ensure that the year 2018 gives them prosperity,  health and protection from evil.

She said the original temple near the Nadi Bridge opened in 1926.

It was at the old temple building that the Then India Sanmarga Ikya Sangam (TISI Sangam), the parent body was formed. She added that the Mahakumbhabisekam Pooja Festival that took place every 12 years would take centre stage from June 14-17.

The other big event devotees look forward to is the Panguin Uthiram Pooja [Kavadi Pooja] scheduled for March 28 – 30.