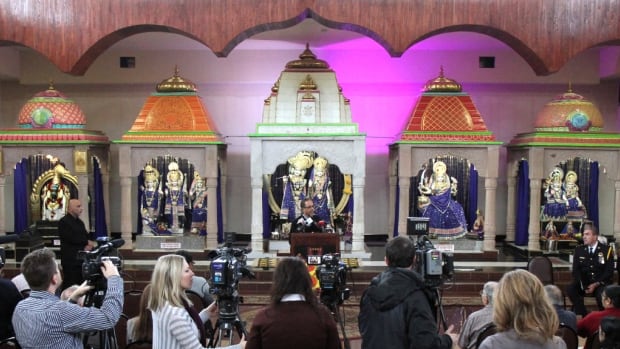 In 2001, news of the temple arson attracted international media attention. Police said new information led to the three men’s arrest. Announcement of the arrests was made in 2013. (John Rieti/CBC)

Leaders of a Hindu temple in Hamilton that burned to the ground after 9-11 met Tuesday to discuss security in light of the horrific bloodshed in Paris that appears to have spawned attacks on at least two places of religious worship in Canada.

Board members of the Samaj temple said the torching of a mosque in Peterborough, Ont., and vandalism at a Hindu temple in Kitchener, Ont., have sparked bad memories of the arson 14 years ago.

We really don’t want to go through it again,” Ramesh Panchal, president of the Hamilton temple, said in an interview. “We’re just barely coming through that right now.”

‘I saw the temple literally burn under my own eyesight. That got etched in my mind.’– Ramesh Panchal

The temple has been in touch with city police, who promised enhanced patrols in the area, and is taking steps to beef up its camera and security systems, Panchal said.

“Police officers have been conducting highly visible patrols in and around areas of the temple and continue to be in consultation with various community leaders about their concerns over recent events and with issues/concerns specific in their neighbourhoods,” Const. Steve Welton said in an email.

In 2001, just days after 9-11 terror attacks in the United States, flames erupted at the Samaj temple near a vandalized mosque that had received a hate message on an answering machine. Investigators determined it had been a case of arson in what police would conclude was a hate crime — and the arsonists had likely confused the temple with a mosque.

At the time, it was considered the worst act of vandalism against a Canadian house of worship after the Sept. 11 attacks — and something Samaj board member Mani Subramanian said he would never forget.

“I saw the temple literally burn under my own eyesight,” Subramanian said. “That got etched in my mind.”

Following 9-11, at least 10 mosques and three synagogues in Canada had windows broken or were spray-painted with hate messages.

So far, however, that kind of backlash hasn’t recurred on a large scale in Canada, with some organizations saying they’d seen no spike in hate-crime reporting in the past several days, although they warned it might be too early to spot any trends.

Welton said that local police are unaware of any specific threats being made to Hamilton locations related to the incidents in France.

“In light of any event that takes place beyond Hamilton, public safety success remains a shared partnership between all community stakeholders and the police,” Welton said. “The Hamilton Police Service reminds the public to report any suspected crimes or suspicious activitiy in their neighbourhoods. To always be diligent about reporting any unusual activities.”

Fo Niemi, executive director of the Montreal-based Centre for Research-Action on Race Relations, said victims of hate-motivated harassment or worse are often scared to speak out or go to the police.

“The attack in Paris certainly could increase the frequency (of hate incidents) but people are still afraid to come forward,” Niemi said.

Still, the two Ontario incidents are among several that have occurred in Canada and around the world since Friday’s attacks in Paris — blamed on Islamic extremists — left 129 people dead.

Police in Toronto were investigating Monday’s assault of a Muslim woman who was punched and kicked by two men who ripped off her hijab and hurled racist slurs. British police have charged a man with attempted murder after a man pushed a Muslim woman into the path of a London subway train. Authorities in Melbourne, Australia, report a man punched a Muslim woman in a random act.

“Hate crime is an act of insanity; it doesn’t reflect the whole community, it is just an isolated individual,” he said.

One positive arising from the Hamilton arson, Subramanian said, was an initiative under the mayor’s leadership aimed at supporting the shocked Hindu community and helping raise funds to rebuild the temple. Police also sought to reassure congregants that they were there to protect them.

The support, however, couldn’t erase the trauma felt by many in the community — especially younger children — who witnessed the fire or watched images on TV.

“The emotional scar it leaves,” Subramanian said, “it takes a long time to heal.”

Last December, Scott Ryan, became the third of three men who plead guilty to two counts of mischief in connection with the 2001 attack. He accepted the same plea deal taken by Christopher Pollard and Damien Marsh.