HOUSTON: In a departure from its programs of the last two years which featured artistes who toured the US and performed at the annual galas of Sewa International’s 38 domestic national chapters, this year the organization decided to focus on the local talents in each individual geographic location. Last year, for example, the gala had an awe inspiring laser sound and light show by Manick Sorcar, son of the late famed Indian magician P. C. Sorcar, at the Stafford Centre. 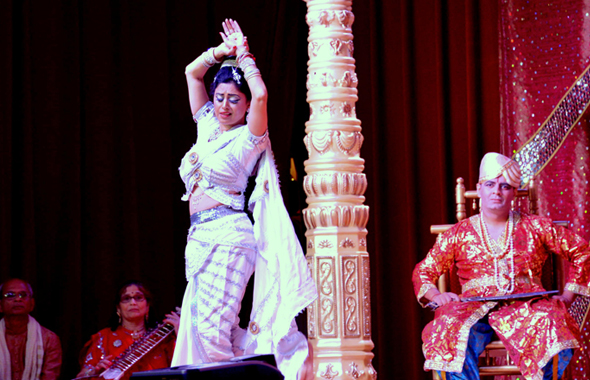 Accordingly, Sewa International’s gala this past Friday, September 5 night at the VPSS Haveli off West Bellfort and the Southwest Freeway focused on the musical dance performances of the students of three dance schools who showed their colorful and energetic skills in to a packed hall of supporters. They sat through the 90-minute program totally engrossed by the three types of dance styles and the dozens of local performers. 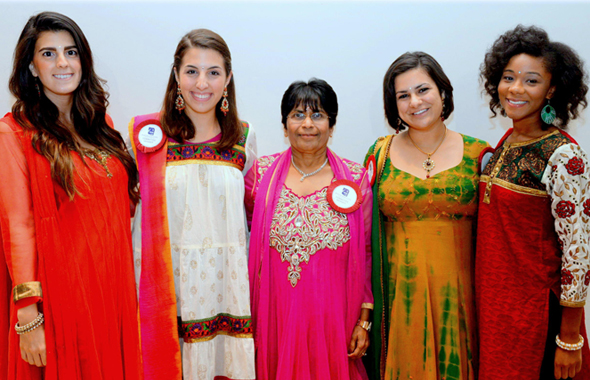 Coupled with the performances of the show held the weekend earlier at Miller Theatre in Herman Park, it was delightful and a matter of pride to discover that Houston has developed such an impressively large cadre of Indian youth interested and involved in the visual and performing arts, with among the largest group of teachers and schools in the country. 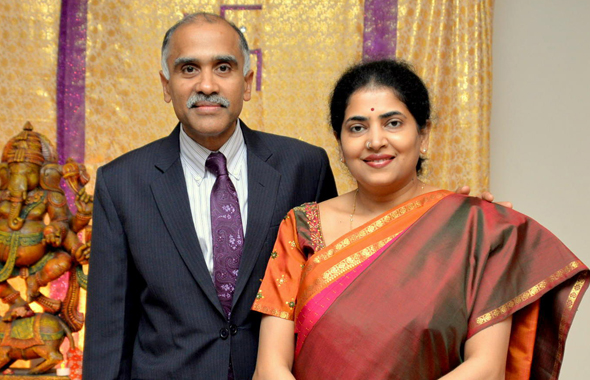 The local Sewa Chapter couldn’t have picked from a better group of dance schools. The first group was from the Anjali Center for Performing Arts, headed by the renowned Rathna Kumar (who could not attend as she was at the side of her ailing husband Anil), with the female dancers performing the number “Elemental” set to a video of the four seasons (taken in a style reminiscent of Anil Kumar’s) and matching lighting changes. The dancers kept pace with the rapid classical beat, even juggling moves while balanced on brass thalis. 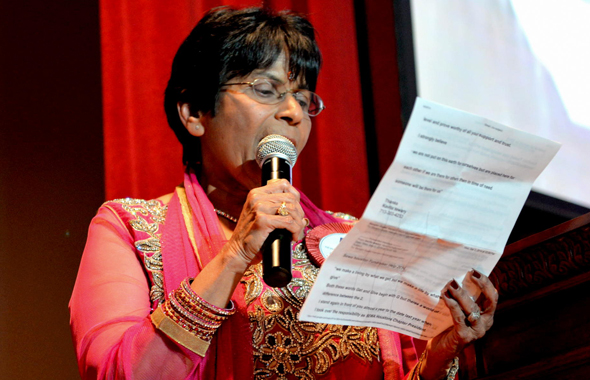 The next group was pure Bollywood, with its bright colored sequined backdrops and dancers costumes from the Infused Performing Arts group, whose Artistic Director Tina Bose and Creative Director Kiron Kumar are the founders of the school and danced the main roles. The dance moves were matched to a medley of Bollywood hits that had many people swinging in their seats.

Rounding out the program was a short play segment depicting the life of the historical figure Amrapali, a nagarvadhu (royal courtesan) from around 500 BC who was renowned for her beauty and dancing in Vaishali in present day Bihar, and presented by students of the Kalakriti School of Dance headed by Executive Director Kusum Sharma who has brought the Ram Leela show to Houston audiences for the past six years. The king Ajatashatru falls in love with Amrapali and destroyed Vaishali to get her, but in the meantime she is transformed by her encounter with Gautam Bhudda and becomes his disciple. 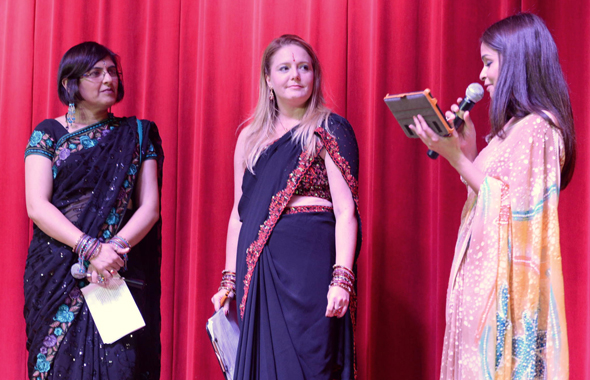 The program was emceed by Priyanka Desai, co-DJ of Music Masala Radio Show and Christine Dobbyn, a reporter for KTRH-ABC, Channel 13 who stood in for her colleague Pooja Lodhia who had to handle some last minute emergency. A nine-year transplant from Indiana, Dobbyn was dressed in a dark sari, matching Desai’s, who helped her wrap it and wear Indian jewelry and makeup as well. Both women worked to energize the crowd and Dobbyn even performed a few steps from her Jazz dance lessons.

Sarojini Gupta, the fervent and enthusiastic President of Sewa International Houston spoke about the four programs the group has pursued over the past year to serve the less fortunate which included sewing and computer literacy classes for Bhutanese refugees; free yoga workshops to help control Type 2 diabetes among Indians; family workshops and a volunteer appreciation dinner in May. In the audience, Madhulika Tewary, a Director at Nexion Healthcare, said she was impressed with these programs and hoped to volunteer in the Stop Diabetes Program.

SI also raised funds to meet its year-end goal of $150,000, most of which was expected to come at the Gala itself. Pledge cards on the tables allowed many people to make donations throughout the evening, a tally of which was announced by the emcees.

Sarojini’s husband, Subhash Gupta who heads the local chapter of Ekal Vidyalaya and is President of the Hindu Svyam Sangh noted that he shares the same office as Sewa and has been an ardent supporter. He lauded the group for its dedicated volunteers, four of whom are Americorps fellows with graduate degrees from prestigious US universities but have committed to SI for a year.

Outgoing Hindus of Greater Houston President Sharad Amin thanked the audience for committing support to SI. “I may not remember what I ate last week or a month ago,” he said, “but I will always remember those who helped me in my time of need.” And, pediatrician and philanthropist Dr. Sanghmitra Misra urged the audience to support SI generously.

Indian Consul General Parvathaneni Harish was the chief guest of the event starting off with a Sanskrit verse referring to the role of service, adding his insights into what it meant to be called to serve. He related it to the role of government officials like himself as public servants and the challenge thrown out by newly elected Indian Prime Minister for everyone to get out of their comfort zones. “In the private sector there are NGOs like Sewa whose impressive work inspires youngsters to serve,” he said, urging “anyone who has an opportunity to contribute in the society in which we live” to get involved.

The evening began with a social hour in the lobby outside the auditorium where vegetarian appetizers were offered, and the capacity crowd spilled over into the covered courtyard which is one of the main attractive features of the Haveli. The food was prepared at the VPSS’s large adjoining kitchen and dinner was served buffet-style after the entertainment program.