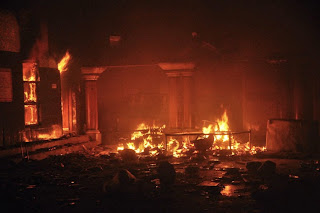 Locals and police said teachers and students of eight madrasas in the upazila led the Sunday attacks on Hindus at Baghsitarampur village.

Twenty-eight families have been affected in the attacks.

A mob of nearly 3000 were involved in the attacks and they looted belongings of the Hindus, most of whom are poor farmers and fishermen.

Villagers said a call was made from the loudspeakers at Jamia Arabia Islami Emdadul Ulum Madrasa at Rampur village, near Baghsitarampur, to launch the assault on the Hindus.

Before the attacks, leaflets were distributed for last several days in the madrasas claiming that two Hindu youths had slandered the prophet in a Facebook post on Apr 27.