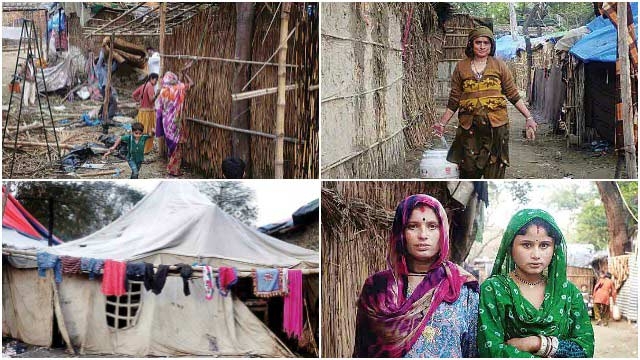 Families living in Majnu ka Tila, locally known as the ‘Pakistani mohalla’ in New Delhi see a ray of hope. The Delhi government has now started to provide Aadhaar cards to Hindu refugees from Pakistan who had fled the country after being threatened by militant groups. The news comes as a godsend for these 600 people, making up 120 families — many of whom need permanent citizenship to stay in India and make a living.

Dayal Das, 42, who fled his home in Sind, Hyderabad in Pakistan to return to ‘Hindustan’, voices the concerns of the community here. “We were kaafirs there and we are ‘Pakistani refugees’ here. We desperately need citizenship.”

It is not that previous governments were not aware of the plight of these refugees. In 2014, during the Lok Sabha elections, the BJP government mentioned that India is a home to Hindus, and all persecuted Hindus are welcome to reside here.

In 2015, almost two years back, the Delhi government provided these families with an electric generator which provides electricity between 6 pm to 1 am; two taps for drinking water and a makeshift toilet van.

But problems still remain. As the families do not have bank accounts, their savings lie stashed in their homes. In November 2016, after a fire broke out in the area, 26 shanties were burnt along with the cash that these families had saved.

Though the government provided these 26 families with a cheque of Rs 25,000 each, they could not deposit the cheques anywhere as they did not have bank accounts. The Aadhaar cards may now change all that and provide employment to these families who currently survive by selling mobile phone covers and juice at roadside stalls.

The refugees here desperately need work. A look around the place reveals their living conditions. Fragile shanties put together using bamboos, reed and plywood. For those who can afford it, there are tarpaulin/plastic sheets to save them from rain.

When they are asked the reason for leaving Pakistan, they attribute it to the Tehrik-i-Taliban. The terrorist group that was formed after 13 groups united in 2007. Dominating the Federally Administered Tribal Areas located along the Afghan border, the terrorist group started creating problems for minority groups living in the areas.

“Things were not as bad before the Tehrik-i-Taliban came into power. We were never a close part of the community, but we had food on our plates and our children went to school. Things started to change after 2007. They would ask us to convert to Islam. There was no safety for our children or women,” Das says.

The need for safety and better living conditions made many Hindus flee Pakistan in 2011. It has been estimated that over 1,400 Hindu refugees have arrived and settled in parts of Delhi. The maximum migrations were observed in 2013 when the two jathas of 250 people each came to India on a ‘Pilgrim’ visa to visit the Kumbh Mela in Allahabad, never to return.

Kishori Mal, 39, who works as the local doctor for the community, says the growing intolerance of the community by the majority community ensured that they had no choice but to flee.

“Our children were not given proper education. Madrassas and schools started to teach Islamic scriptures in Sindhi or Urdu, and our children were being distanced from our Hindu culture and traditions. This made us worry about the future,” he says.