Hindu Mandir Priests’ Conference (HMPC) grew out of Hindu Mandir Executives’ Conference. The mission of HMEC is to provide leadership to the Hindu-American community by promoting program activities to nourish, protect and sustain Hindu Dharma in North America through Hindu Temples. The 3rd HMPC was hosted by Durga Temple, Fairfax Station, VA, from May 29 – 30, 2014.

Over 30 Pundits and 50 adult and youth delegates, representing more than 25 Mandirs and Hindu organizations, attended this year’s conference. The Theme of the conference was ‘Role of Temple Priests in 21st Century’. The conference was organized into 7 sessions, and the topics were consistent with the HMPC’s objective: Sustainability and Advancement of Sanatana Dharma by making the modes of worship meaningful and relevant for the younger generation of Hindus. The seven sessions were: Inaugural Session, Bal Samskaras, Open Forum, Priests-Management-Devotees, Roles of Priests not associated with Mandir and other Topics, Education & Training, and Concluding Session.

Deep Prajjwalan, Sri Ganesha Atharvashirsha by all priests formally opened the conference. The convener, Sant Gupta and the President of Executive Board of Durga Temple, Srilekha Palle delivered the welcome address and conference goals and objectives. Ekatmata Mantra led by Abhaya Asthana followed by Vandana by Durga BalGokulam Children led by Madhuri Prasad set the tone for the rest of conference. Emcee for the evening was Navin Kadakia of Pittsburgh thanked The World Hindu Council of America (VHP of America) for providing the leadership for such an important event. 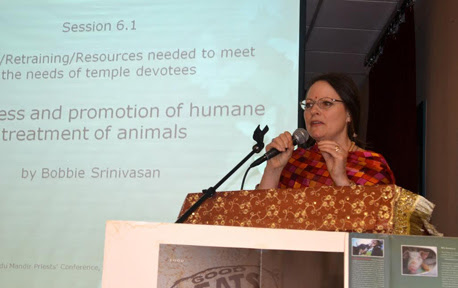 Sri Ronur Murali Bhattar, Chief Priest, Hindu Temple of Minnesota prepared the keynote address on ‘Importance of the Role of Mandir and the Pundit in a community’. Since Pundit Ji could not attend the conference, V. Shanmugasundaram delivered the briefing. He highlighted the intertwining relationship between the temple infrastructure and the temple priest. He emphasized that the priest should act as a servant leader, earn respect by their knowledge and wisdom. Pundit Hirday Sharma presented the history of Durga Temple and highlighted how they overcame the difficulties encountered during the early years of the development cycle. While pundit Ram Hardowar briefing focused on the issues from the stakeholders’ point of view, Dr. Anju Preet and Rashel Bajaj presented young adult and youth perspectives respectively. Swamini Sarvaananda discussed Hindu Chaplaincy in the US, the role of Priests and the methods to maximize the benefits to the devotees.

On Friday, 30 May 2014, the event began with Kirtan, and Bhajan led by Pundit. Shanti S. Sharma of Durga Temple. Moderated by Kusum Taneja, the subject of Session 2. was Bal Samskaras and its importance for sustaining these processes. Considerable discussions took place regarding the consistency and tailoring of these samskaras to suit the context and at the same time preserve the intent of these great traditions. Samskaras discussed were: Annaprashan, Namkaran, Annaprashan Samskar, Aksharambha and Upanayan, and Vivaha samskara.

The Session 3, a round table question & answer session, moderated by Kamlesh Kapur. Questions/ Concerns had been collected previously through a survey.  A list of selected questions was given to all attending priests. Majority of priests responded with thought provoking perspectives. There were the constructive interactions among the priests and the devotees.

The session 4 moderated by Hari Bindal focused on the triad namely Priests, Management and Devotees. Some of the topics discussed during this session include Hindu Chaplin in University Setting, preservation Of Bharatiya Sanskriti through Samskrit presented by Samskrit Bharati, the disconnect between the next generation of Hindus and the temple traditions, and the Scientific and Symbolic significance of Hindu Rituals. 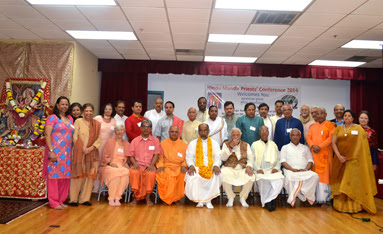 The issues pertaining to independent priests, not affiliated with any specific temple were addressed in session 5 and moderated by Shankar Iyer.

The Session 6, moderated by Amar Persaud addressed priests’ education & training. The presenters highlighted the need for equipping the priests with techniques and knowledge through education and training to meet the emerging needs.

In the session 7, concluding session of the conference, Sanjay Mehta presented the summary and action plan. The following is identified as action items:

Develop a mechanism to build constant communication amongst priests to share experiences and best practices.

Community Counseling: Chaplains and priest coupling – Develop a program to define how priest and chaplains can work together in addressing counseling need of the community.

Alok Shrivastava of Rajdhani Mandir, VA thanked all the delegates, volunteers and the organizers for a successful 3rd Hindu Mandir Priest Conference (HMPC).

VHPA, founded in 1970 and incorporated in the state of New York in 1974, is an independent, nonprofit, tax- exempt and volunteer-based charitable organization serving the needs of Hindu community in USA. It aims to build a dynamic and vibrant Hindu society rooted in the eternal values of Dharma and inspired by the lofty ideal of Vasudhaiva Kutumbakam, i.e. the entire creation is one family.