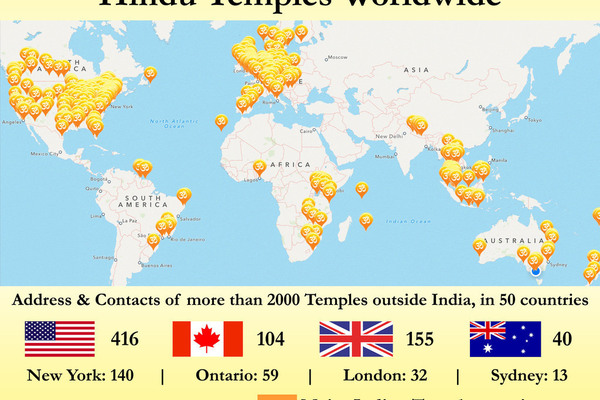 Help me create an awesome Hindu Temples Directory App on Android and GIVE IT AWAY for FREE.  I created the above iOS app but had to put it behind a Paywall to cover costs, help me make the ANDROID app and give it away for free:

No catches, no ads, no strings, no BS.   This will help millions of Hindus all over the world find and get information on Temples near them.

There are many apps to find Churches, Mosques and other places of worship,there isn’t a good one to find Temples……Yet.  We will make one.


The Hindu Temples Android app will help Hindus the world over find and get contact details, opening hours, Phone numbers , websites, address and other information about temples all in one easy to use app.

Your contribution would help Hindus all over get to their nearest temples quicker and in turn support the temples as they will find a bigger audience.

I need ~2000 $ to create an awesome Android app + expand our world wide coverage to more countries. So far, I have already spent thousands creating the Free Directory and the iOS App just for it to be a useful resource for Hindus.

We currently have ~ 2000 Temples in 50 countries in the directory.  This is nowhere close to the real number of Hindu temples, We want to expand this to include more countries and more details for the larger temples.

Any extra funds raised go to improving the coverage and mapping temples in India.

What The Hindu Temples Android APP will do ?

Give everyone a list of 100 Temples near them based on location.  Allow them to save their favorite temples offline.

For every temple it will give the following details.

We have done this before in our iOS app and on our website. The number 1 feedback I got when I released the iOS app was “What about Android ?”

Here’s YOUR chance to Help build the an awesome Android APP and help Hindus the world over.

What other people have said about us ?

See other reviews for the iOS App here

I have done this all by myself on iOS app and on our website, I will do it again.  There can be delays but I’ll build this, There is no Turning Back.

I also have a strong team of volunteers who have gotten in touch with me offering support so rest assured that we will build this.

Other Ways You Can Help

No Money, No problem, stay in touch with us here Hindu Temples Android