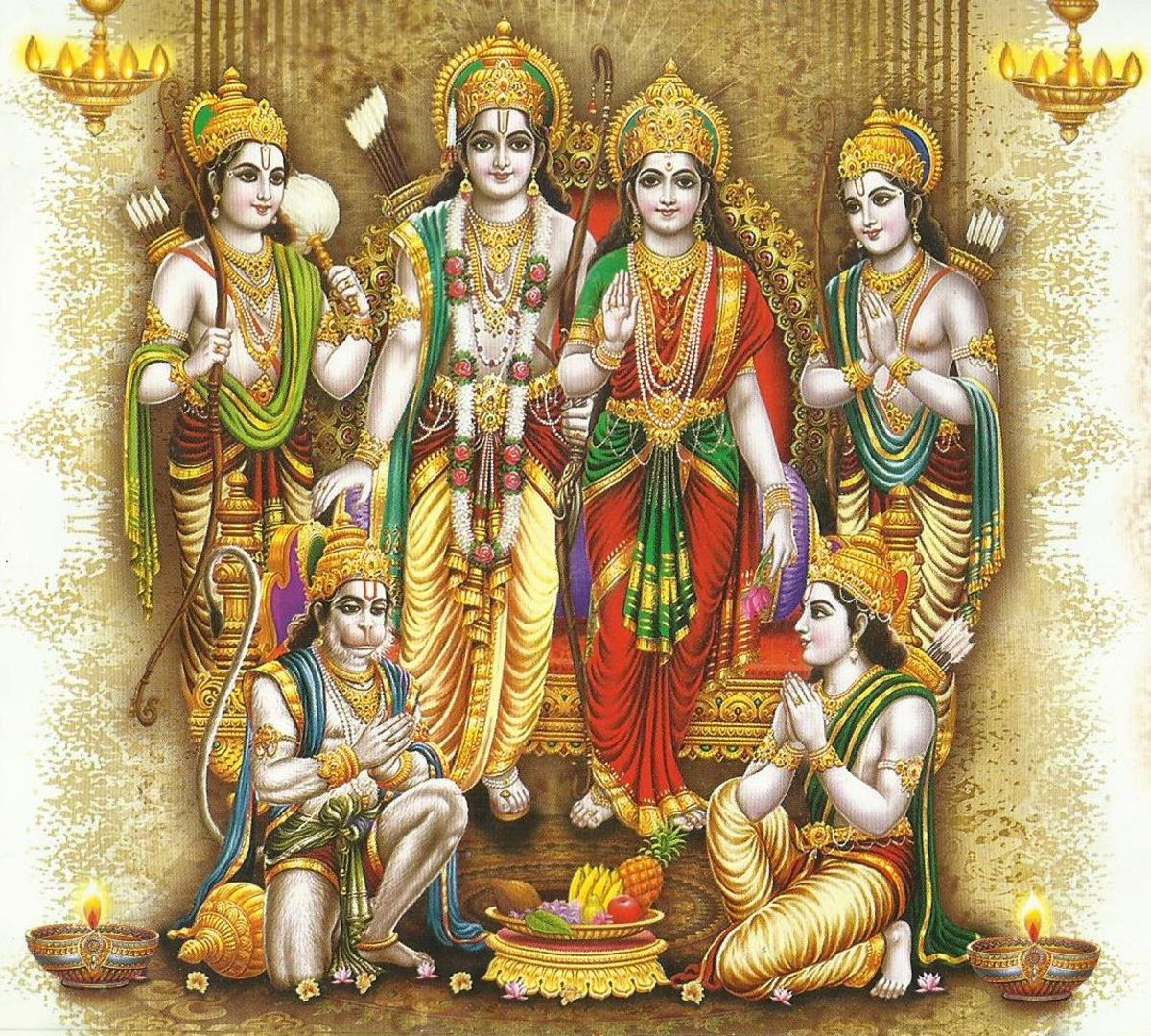 May Sri Rama, Sita surrounded by Bharatha, Laxmana, Satrugna , and Hanuman at Coronation, hence Raja Ram, bless you , your family on the occasion of Sri Rama Navami, his birth day, which is also celebrated as his coronation day as well.
Sri Rama was born in Ayodhya.
As you know the temple there got replaced with a mosque.
And all sorts of excuses were provided to cover up the obvious in order to promote interests of Babur who some said will never destroy any body else’s holy place, and placed his mosque only on an empty lot.  One cannot simply say only one lie . So to buttress this falsehood, eminent seculars asserted Rama was born in Afghanistan not in Ayodhya.  Arun Shourie pointed this out , to disprove it may take a month or an year even though mendacity was clear. Meanwhile every Main Stream Media world over screams the temple issue is controversial.
If we disregard the manufactured ‘controversy’ with all the contempt it deserves the following become crystal clear.
Rama was born in Ayodhya,
A magnificent temple existed there ,
Babur , first Mughal invader destroyed it , replacing it with a mosque.
Babur’s structure was pulled down few times in history to restore temple by Hindus.
One time it was *Guru Govind Singh  leading Sikh army along with mobilized local Hindu forces led by a Baba who freed the site , reestablished Rama’s worship in Ayodhya. It took Aurangazeb, scion of Babur, one year at cost of 10,000 soldiers to pull down the new temple and put up domes at the site, the only mosque in the world that had a ‘Sita Kitchen’.
Again March 1993 saw , Babri domes pulled down to make a way to build a magnificent structure again. Please note already a make shift temple existed there under the domes way back in 1948 . Court ordered then to open locked doors to Hindus to conduct worship of Sri Rama whose images were discovered there .
Subsequently relatively recently again by Court order when the place was dug by Archaeology  department , a massive temple structure under the ground at the place was discovered.
If only the movement to reconstruct the Ayodhya temple was led by men of same mettle and character  like Sardar Patel and K M Munshi who brought back Somanath temple in Saurashtra in Gujarat  , after shifting a mosque there to a different area, as one of first acts of Independent India , in spite  of opposition by Gandhi and Nehru,  to day there would have been a temple of equal magnificence in Ayodhya also.
It is regrettable to see political foot ball being played using Ayodhya temple, it is remembered when BJP was out of power or seeking power , once in , the issue is relegated to back ground. Again noises are being heard , the Ayodhya issue being raised again on eve of UP state elections.
Even VP Singh issued an ordinance to take over the site from a Wakf Board, but rescinded it of course that made matters worse. It hangs in limbo still, not withstanding courts’ orders, not withstanding the proof of presence of pre-existing temple there.
While this issue remains thus, meanwhile in Kashmir, Pakistan, Bangladesh 100s of temple are destroyed as if there is no tomorrow. Islamic State Frachinses operating in India already declared Jihad on existing functioning temples openly in India.
It is wrong to think if Hindus insist on temple in Ayodhya, then it may lead to communal clashes . Even if Ayodhya temple  issue was not there, communal clashes will always be there as long as mindset of fanatic separatists remains unchanged. There was no Ayodhya issue in 1947 yet demand was made to divide India at sword point and  India was split.  Yet self deception goes on unabated as if , if only Hindus remain pseudo-secular, meek and submissive and not stir or make any demands however right , then Islamic terrorism will go away.
Instead of peacock,  we should make ostrich as India’s  national bird.

My friends, victorious nations do not tolerate constant reminders of their humiliation standing intact. The monuments tyrants inflict are relegated to museums at best or to dust . Poland shifted a Russian Orthodox church and replaced it with a Catholic Church when it became free of Russian control. When Russians became free from grip of Communism they pulled down Lenin and Stalin massive statues from their pedestals. Iraq did the same to monuments to Saddam Hussain. Even in India all over statues of King George or Queen Victoria were removed from public thoroughfares in all cities except in Chennai where His majesty’s loyalists, DMK insisted on having their masters grace the main streets.
India  , people of India that include patriotic Muslim Indians as well have to take a stand. Otherwise even national flag or national anthem will become ‘controversial’ because some detractors choose to agitate over them. And they have.  Babur was an alien, there are not many of his direct descendants who require to have Babri domes in Ayodhya to pay homage to. Instead almost all Muslim Indians are Hindu in origin. In objects of reverence for the nation every one should take pride and show respect. Goodwill is not a one way street. India is second largest in the world, in having number of mosques.  If Ayodhya, Mathura and Kasi temples are restored with cooperation of Muslim Indian leaders, their organizations rather than confrontation  , tremendous good will generate between two communities which will make India exemplary for unity in diversity and harmony . They mosques there will serve no religious purpose other than serve as ‘ocular manifestation’ of India’s humiliation.
Hence Sri Rama temple coming up again in Ayodhya along with cooperation from patriotic Muslims of India will rewrite history of India and serve as an  example of in modern times, India’s ability to bring harmony as well as unity in diversity which in turn will be exemplary for rest of the world.
Jai Sri Rama
G V Chelvapilla
Source: World Hindu News (WHN)