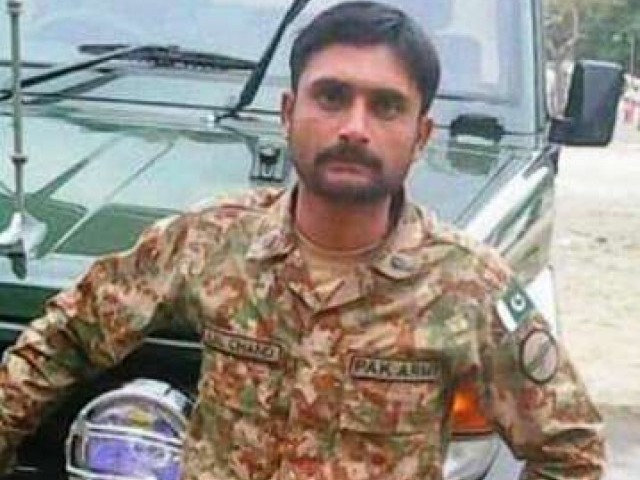 KARACHI: It was in 2009 that a young Hindu boy after passing his matriculation examinations went to Badin from his village without informing the family and applied to be recruited in the army.

It was his dream to serve his motherland that was answered on May 17 while serving in the line of duty.

The young Hindu soldier of Pakistan Army, Lal Chand Rabari, 27, was an emotional young man with a dream to protect his country from the enemies since his early days and had joined the army and breathed his last while serving on Mangla front.

Rabari, a native of Ismail Khan Nautkani village in the Badin district, was the fifth of eleven children of a poor shepherd father and a farmer mother.

Bhemon Rabari, his elder brother, while taking to The Express Tribune, added that earlier his posting was in the Waziristan tribal area where he desired to crush militants who had caused damage and inflicted losses on the country.

“I would take revenge of every drop of blood from those who have inflicted loss to the children and people of our country,” Lal Chand used to say when he returned from his posting in Waziristan, earlier.

While remembering the memories of his brother, Bhemon added it was written in his fate that he would sacrifice his life for protecting his country.

“We have been missing him, but at the same moment the thought of our brother no more with us is also making the entire Rabari community proud that he gave his life while being the soldier.”

According to Bhemon, his brother passed the intermediate examination and finally graduated while serving in the army and was on the rank of Lance Naik in the army.

Lal Chand used to encourage his two younger brothers, who are currently studying in class 11 and 7, to join the army and right now they are really motivated to join the same institution in which Lal Chand gave his life while serving,” added Bhemon.

“The country we are living in is like our house and whosoever would attack on it would have to face serious retaliation till the last breath in my body,” used to be the words of Lal Chand as remembered by his elder brother.

While reminding of his lineage, he said being a member of the Rajput clan, we are always ready to fight enemy whosoever they be until the last drop of blood for the country.

“Our mother is all set to sacrifice his sons and grandsons in defending the country and has no remorse for losing his son while defending its boundaries,” he said while quoting the elderly mother, adding “Their late father would have been more proud of his services for the country.”