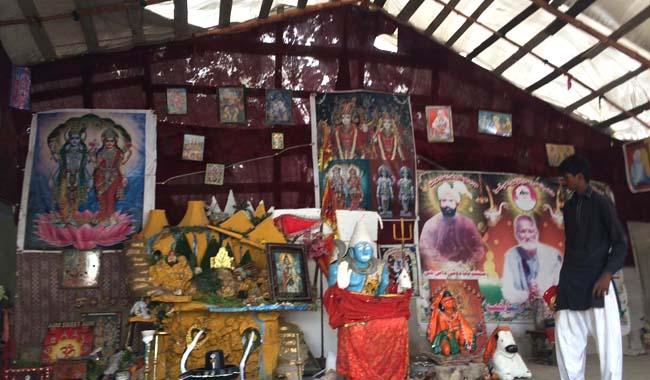 A constant shadow of threat looms large over Hindu residents of an informal settlement in Mehmoodabad since the area’s influential locals started pressurising them to evacuate the locality.

The settlement named Basti Guru Bagh, which houses more than 100 Hindu families, is situated near Junejo Town and Rehman Colony, and falls under the jurisdiction of the Baloch Colony police station.

Primarily hailing from District Ghotki, the Hindu residents said they had been living in Basti Guru Bagh since the 1960s. However, they added, influential locals, with the help of Muslim clerics, had been trying to push them into evacuating the area.

“In the past few months we have been feeling threatened. Electricity and water connections of our houses were also cut recently,” said Shiva Dharni, a women’s community leader.

“Land grabbers have been eyeing the plot our settlement is built on. They want to sell it by forcibly expelling us, for which they can go to any lengths.”

The Hindu residents also fear that the land grabbers have been persuading Muslim clerics to help them on the pretext of blasphemy, causing further problems for the minority community.

The settlement largely comprises a cluster of small, wooden huts and semi-pukka abodes, providing residence for the impoverished Hindu families. In the past few years, a number of houses have twice been mysteriously torched.

There is also a temple in Basti Guru Bagh, where the non-governmental Initiator Human Development Foundation (IHDF) runs a school for the children of the settlement.

IHDF head Rana Asif Habib told The News that the community’s concerns regarding their security were genuine, lamenting that the authorities, especially the police, were not taking the issue seriously.

“It is, in fact, a serious issue. It is the state’s responsibility to protect the vulnerable communities and stop non-state actors from pressurising the utility bodies into cutting electricity and water connections,” he said.

“We have a number of recent examples of mob violence against non-Muslims, in which the police have totally failed to protect the members of the communities.”

Interviews with Muslim residents living around the settlement corroborated with the Hindu community’s concerns. “Presence of Hindu settlements among Muslim-majority neighbourhoods has been causing social and religious issues. It’s high time they were removed,” said a local. He also maligned the characters of Hindu girls.

Another resident said the Hindu community had illegally occupied the amenity plot reserved for the social welfare of the locals. Yet another resident claimed that he had been shown in a “vision” that a mosque was supposed to be where the Hindu temple currently stood.

Dr Nadeem, vice-chairperson of the Manzoor Colony union committee, told The News that he was unaware of the situation in the settlement.

“The Hindu community has been living in the area with Muslims in harmony since the 1970s. I keep in touch with them, and I think there’s no such issue.”

Baloch Colony SHO Abdullah Bhutto told The News that the case of the plot in question was pending in court. “Since the matter is in court, I can’t comment on it.”

He, however, said that there was no law and order issue between the Muslims and members of the Hindu community residing in Basti Guru Bagh.