According to Behl, many words in the Japanese language are from Sanskrit. 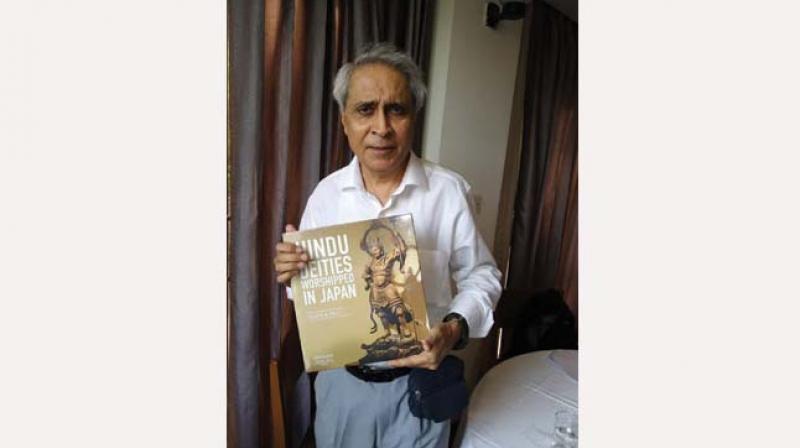 New Delhi: It may surprise many Indians but scores of Hindu deities, including Saraswati, Lakshmi, Brahma, Ganesha, and Garuda, are actively worshiped in their temples by the Japanese, preserving Indian traditions that have practically been forgotten in India, shows a film screened in Delhi on Sunday. It revealed that there are hundreds of shrines of Saraswati in the land of rising sun.

The well-researched 30-minute documentary, “Indian Deities Worshipped in Japan”, funded by the ministry of external affairs, is directed by global fame photographer and art historian Benoy K. Behl (62), who specialises in the study of ancient cultures and historical monuments across the world. He has been engaged in research on Hindu deities in Japan since 1994.

“Unlike most cultures that spread with the force of sword, Indian philosophy of ethical living travelled to every corner of Asia through our traders who showcased the link between ethics and commercial success,” Mr Behl told this newspaper, quoting a former Japanese ambassador who said that the “Japanese culture is founded on the Indian culture”.

“The film depicts the science of living and Indian philosophy of ethical living as most Hindu Gods are the personification of the fine qualities inside you,” said Mr Behl, who holds the Limca Book Record for being the most travelled photographer.

Mr Behl said his film creates a little bit of stir by implying that Hindu deities are worshiped and “havens” or “homa” or “goma” are performed daily in nearly 1,200 temples in Japan. “Our relationship with Japan is far closer than Indians seem to be aware of,” he said.

“In Japan, Saraswati is depicted and venerated not only with the Veena, but also remembered for her association with water. One may recall that Saraswati is originally the personification of the river by that name. Therefore, she is also worshipped in pools of water in Japan,” he said. “Many deities such as Vayu and Varuna forgotten in India over the ages are still worshipped in Japan. Apart from Indian deities, Sanskrit language is also well preserved in the Shinto and Buddhist-dominated country,” said M. Behl, a product of St. Stephen’s College and FTII.

According to him, many words in the Japanese language are from Sanskrit. Sanskrit was also the basis for the formation of the Japanese alphabet ‘Kana’.

In the supermarkets, a major brand of milk products is called “Sujata”. The company personnel are taught the story of Sujata who gave sweet rice milk to the Buddha, with which he broke his period of austerity, before he gained enlightenment, he said.

This month, Mr Behl has also come out with a coffee table book Hindu Deities Worshipped in Japan — his seventh related to art and culture.