There are frequent surveys in the news media about the best schools and colleges. They rank the schools and declare some school as the best overall. What does it mean? That the particular school produces the most brilliant students and performers? That all the students from that school are Einsteins? And all the teachers at the school are the greatest in the world? I’m sure nobody takes these surveys to mean that. Or does the country with the biggest economy mean the most happiness? Lately there are surveys to rate the happiness quotient of countries. Some country topping the list surely doesn’t mean everyone is happy out there but it’s a general indicator from the samples taken. Our Fiberals who conduct such surveys do not like applying the same wisdom or theory to other areas. We shall see.

A few days back Yogi Adityanath was under the hammer again; this time in “Aap ki Adalat” by Rajat Sharma on IndiaTV. It’s fascinating how one man has rattled the media and they are unable to come to terms with the blunt truths he is dispensing. The Yogi is now headed to being tarred like Modi once was – Mass murderer, Hate-monger, Communal hater, Fascist, Bigot, Racist… Got any more names? Anyway, let’s watch some excerpts from near the end of the show (4.25 mins. Full video on Youtube):

Wow! So when these morons have to confront the Yogi they are reminded ofMKGandhi, Buddha and Mahavir. I wonder why these idiots never go to terrorists and teach them about turning the other cheek. Imagine, a man points a knife or a gun at you or is about to rape your mother, sister, wife or daughter and our Fiberals ask you to turn the other cheek. MK Gandhi has been put on such a pedestal that some of his serious mistakes are being white-washed by these scumbags. MKG wanted Hindus to suffer the Moplah rapes and murders. He wanted to support the Caliphate movement to appease Muslims (The ISIS is working on those dreams now). He wanted Jews to surrender to death peacefully. Most of all, MKG also wanted India shouldn’t have an Army, Navy or Airforce. Do these idiots want India to listen to MKG and dispense with our Army? When convenient, these criminal media crooks will pick up some quotes from Gandhi and throw at you without the whole truth. Did MKG prevent all the communal riots in his time? Why is it that MKG is not responsible for a faulty partition that has left India with the menace of communal riots when the partition itself was based on religion? The deceivers won’t have any answers.

As if all that wasn’t enough, the judge on the show is none other than Congress pimpVinod Sharma. This guy is one sick man who shouldn’t be in the media or TV at all. He lectures the Yogi on virtues of peaceful living and how a nation cannot be run on “hate” and so on. One pet canard that Fiberals like to spread is that MKGandhi would have been non-violent no matter what. This is sheer nonsense. Here is what I tweeted inOctober 2011 to his degenerate great grand-son who scavenges in the name of Gandhi:

Was I wrong? It would cost me nothing to be wrong. But I doubt I am wrong. Here’s aCNN-IBN report reproducing some background on why MKG wasn’t considered for a Nobel:

“But Partition seems to have played a spoiler this time. The Nobel Committee report said: “The following 10 years, from 1937 up to 1947, led to the event which for Gandhi and his movement was at the same time the greatest victory and the worst defeat – India’s independence and India’s Partition… “Then he added: “…sharp turns in his policies, which can hardly be satisfactorily explained by his followers. (…) He is a freedom fighter and a dictator, an idealist and a nationalist. He is frequently a Christ, but then, suddenly, an ordinary politician.”… “No one wanted war, but he could never advise anyone to put up with injustice. If all Hindus were annihilated for a just cause he would not mind. If there was war, the Hindus in Pakistan could not be fifth columnists. If their loyalty lay not with Pakistan, they should leave it. Similarly, Muslims whose loyalty was with Pakistan should not stay in the Indian Union.”

If all the Hindus were annihilated for a just cause he would not mind? Do our Fiberal idiots agree with MK Gandhi on this? Do these morons agree that there can even be a JUST CAUSE for all Hindus to be annihilated? Where do such statements come from? In the same breath MKG said “Similarly, Muslims whose loyalty was with Pakistan should not stay in the Indian Union.” Want to implement that quote of Gandhi too? Long before I made my tweet above, here is what aNobel committee member said:

“Gandhi had many critics in the international peace movement. The Nobel Committee adviser referred to these critics in maintaining that he was not consistently pacifist, that he should have known that some of his non-violent campaigns towards the British would degenerate into violence and terror. This was something that had happened during the first Non-Cooperation Campaign in 1920-1921, e.g. when a crowd in Chauri Chaura, the United Provinces, attacked a police station, killed many of the policemen and then set fire to the police station”.

I don’t care if MKG was worth a Nobel. He was a great man anyway with all his faults. But our Fiberals misuse “Gandhi” to make the most nonsensical points to Hindus. If Mahatma Gandhi were alive he would have wanted to shut them up and most of their illegitimate practices. And if Buddhists are largely a peaceful community, are they going to be spared? Here’s what jokers like Rajat Sharma are too blind to see: 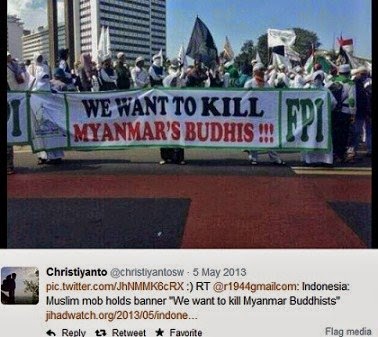 How is Indonesia bothered by Burma (or Myanmar). Even if there are problems in Myanmar with the Buddhists and Muslims why should Indonesians want to kill them? Oh wait! All Indonesians aren’t like that, are they? So if I point to Azad Maidan, they’ll say all Muslims aren’t like that. If I point to London and the crowd wanting to kill Salman Rushdie, they’ll say all British Muslims aren’t like that. Who the hell said “all are like that”? But the “sample” you consistently provide on all parameters across the world does get your community that tag. It is not wishful thinking by others. That’s how a college gets voted the best or a country gets voted the happiest. Let’s get back to where we left off in Part-1. Here’s a woman in red, a typical brain-washed Fiberal, who dishes out this same stupid logic. Tommy Robinson of EDL keeps asking how he’s a racist so she explains (0.36 mins):

Okay! So the bimbo says Robinson picked up a “tiny minority” from a whole community of hundreds of thousands (The sidekick interjects and says “billions”) and tarred all of them so that is “racist”. How lovely! This is the same stupid argument you hear all over India and all over the world. Your brother goes around killing people but if I ask you to put a leash on him you get back with “Don’t tar my family else you are racist”. Did Robinson say all Muslims or all British Muslims are thugs? I doubt it but you can see how the bimbos and liars hide behind such spurious logic. And if at all a “tiny minority” of your community is committing crimes then who is responsible for controlling them? Only the police? Not their families, not their community leaders or mosques that these people are members of?

In another event of the Heritage Foundation over the killing of the American Ambassador in Benghazi a similar incident happened. A Muslim argues that all Muslims cannot be tarred with the brush of terrorism. Actually, nobody even tarred any Muslim or talked about Muslims in that meeting. But she got a severe answer from a panellist, Bridget Gabriel. Watch the video (5.49 minutes):

The majority of the community just watch. The silent majority stays silent which is why the nonsense goes on. This is true for Hindus too. Because a majority of Hindus cannot see the nonsense of “Sickular” politicians and media they endure the abuse and atrocities on them. This is starting to change with many people speaking up (people like the Yogi) and that is bothering the criminal media folks immensely. It threatens their corrupt life and discourse. Following that response by Bridget Gabriel, some in the US media predictably called it a rant and hounding of the sole Muslim girl in that event. When the girl claims she’s the only representative there she is actually applauded by the audience and not taunted as some US media reports claimed. But here’s some damaging revelation: That girl, Saba Ahmed, turned out to be connected to a violent Jihadi. 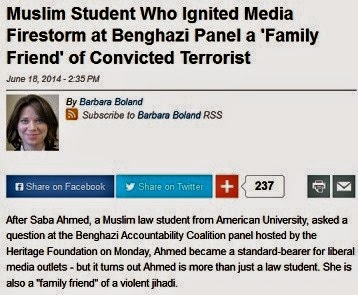 Now what? Now you read the full report and it makes chilling reading. There is no getting away from the truth about all this anymore. These are pet canards media and politicians like to hurl at everyone who speaks the truth. Those who speak up will not be challenged with facts and logic but sentimental claptrap and name-calling. We are not done yet. In the aftermath of the expose of 1400 rapes in Rotherham there are some more chilling facts. Take a look at this: 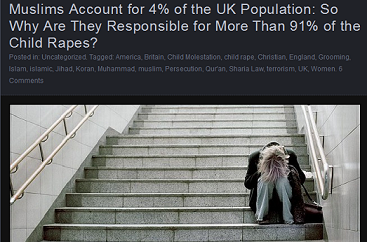 It is something similar that the Yogi too argues. That the moment Muslim population starts rising in an area there is a disproportionate rise in communal riots. How does one explain 4% of British Muslims committing 91% of child rapes? Even if you provide for abundant discounts I doubt the picture can change dramatically. Will the bimbo in red who ranted against Tommy Robinson explain this? Would that moron called Saira Khan (in purple) explain this? Robinson and his EDL were formed with rival football club fans in Luton. I have been to Luton a long time ago. It is a sleepy town near London where one would have never imagined violent protests or Jihadi activities. Even if some of them were or are “football hooligans” why should that negate the arguments on a different issue? Well, that’s the Fiberal way of life. But wait, the shock is not over yet. Let’s watch this related video on this 4% Muslim population and crimes (4.32 mins):

When an advisory was sent to the Mosques to condemn the rapes 75% of them refused to read out the message or condemn the crimes. Should we interpret this as approval by the Mullahs of those who carried out the 1400 rapes over 16 years? Why not? Would that red bimbo and her types answer why? The bogus argument that a “majority” of a community are innocent is a misleading canard used to cover up crimes. Have we seen Mullahs in India condemning crimes and terrorism by Muslims? Are the idiots seriously suggesting that we should respond or speak only when all 1.2 Billion Muslims become violent? No society will exist if the entire population of a community became criminal. India wouldn’t exist if 800 million Hindus decided to become criminals and pursue a career in crime. This is another pet canard that our Fiberals use to dodge the real issue of consistent crimes from a community.