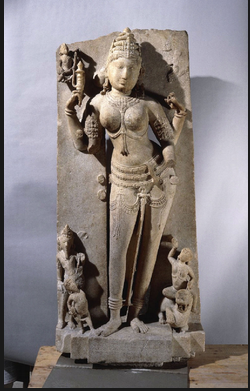 The place for the pratimaa is NOT the British Museum but in the temple in Dhar, Madhya Pradesh, which is now empty.
Let not UK wait for a court case to return the statues or argue if it was a Jaina temple or a Hindu temple as some in British academic circles have sought to argue in JRAS.
The details of the stealth of the statues and their provenance have been well-documented.
http://bharatkalyan97.blogspot.in/2014/02/british-museum-return-two-sarasvati.html

British Museum should return two Sarasvati idols to India. They belong to a temple in Dhar.

Will Cameroon act, the gracious way Abbott has acted?

See details in: http://bharatkalyan97.blogspot.com/2014/09/now-it-is-cameroons-turn-to-return-two.html Now, it is Cameroon’s turn to return the two Sarasvatis stolen from Dhar. Congrats to Abbott for returning the Nataraja. People in Dhar, India are praying in the temple set up by Bhojaraja to the empty niches where the statues were held in 12th century. Sarasvati is revered by Hindus as divinity of learning. Please arrange to return the two statues now in British Museum so that worship can restart in the temple in India. This will be a fit tribute to the memory of British regime in India when this unfortunate incident of  taking away the two statues happened. The provenance has been conclusively proved by ancient texts and inscriptional evidence. I am sure Hon’ble PM Cameroon will act suo moto and grace the ceremony to venerate the divinity of learning and rebond the India-UK civilizational ties. S. Kalyanaraman, Ph.D., Director, Sarasvati Research Center.

Return of the Nataraja

The villagers are waiting with hope for the iconic piece to be brought back to the temple from where it was stolen.

The news of the return of the 1,000-year-old bronze Nataraja idol of the Sripuranthan temple has gladdened the village in Ariyalur district.
The villagers are waiting with hope for the iconic piece to be brought back to the temple from where it was stolen.
“We feel immensely happy. We have got back our priceless property which we lost years ago,” said S.S. Jei Suda, a resident of Sripuranthan and chairman of the T. Palur panchayat union.
“It was a brilliantly crafted and rare idol,” recalls G. Ravanan, 65, a resident of Sripuranthan. He had seen the idol when it would be taken out in a procession during the Thiruvathirai festival.
The whole village felt distressed when it was stolen a decade ago. In fact, the residents then felt that there was no point in staying in the village any longer, he said. “When we hear that the stolen idol is being handed over to the country we have no words to express our delight,” he said.
“The idol should be given back to the village and installed in the temple with proper safety measures so that pujas could be performed to it once again,” says Ms. Sudha.
“We will feel doubly happy if the idol is returned to the temple,” says R. Ulaganathan, also a native of Sripuranthan and district secretary of the Communist Party of India. He urged the State government to arrange for security measures in the temple once the idol was brought back.
There is a sense of elation among investigators who made painstaking efforts to trace the idol and bring it back to the country. “We feel happy that our sustained efforts have borne fruit,” says a police officer attached to the Idol Wing CID handling the case. In all, eight idols were stolen from the temple.
http://www.thehindu.com/news/national/tamil-nadu/return-of-the-nataraja/article6384683.ece