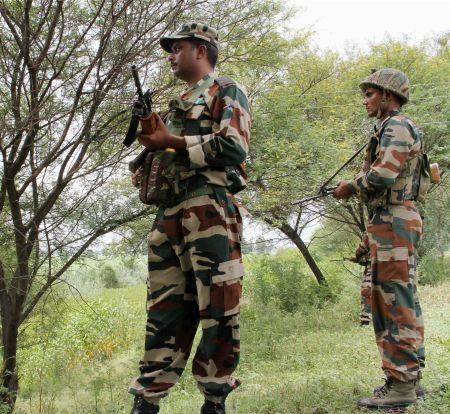 Four civilians were killed and around 10 were injured after the Pakistani troops violated the ceasefire along the border in Jammu and Kashmir.

The firing on Indian positions in the Jammu region in which 10 people were also injured on the country’s Independence Day in ceasefire violations for the seventh consecutive day drew strong retaliation from Indian troops. One child was believed to be among the injured

The offensive came even as Pakistani Prime Minister Nawaz Sharif sent his greetings to Prime Minister Narendra Modi, saying promoting friendly ties between the two neighbours was in mutual interest and ahead of the talks between their National Security Advisors scheduled in New Delhi on August 23.

There have been 32 violations of the 2003 ceasefire accord in August and this is the seventh consecutive day that Pakistani troops have shelled Indian posts along the LoC in Jammu region, an army official said.

While Pakistani troops resorted to mortar shelling of 60 mm mortars shells and firing from 6 pm on Friday evening to 11.50 pm in Hamirpur sector, they also fired in Mandi and Saujiyan sectors from midnight to 3 am and again from 7.30 am, he said.

There was also firing by Pakistani troops on Indian positions along the LoC in Balakote sector from 11.30 am and it is going on, a police officer said.

Seven civilians have been injured in the shelling, the officer said, adding they included one child.

Lt Col Mehta said troops guarding the borderline retaliated, resulting in exchanges, which are going on.

On August 14, Pakistan troops had resorted to firing with automatic weapons and 82 mm mortar bombs on forward posts and civilian areas in Shahpur Kerni belt of Poonch district.

Pakistani troops had also fired on forward posts along the LoC in Balakote belt with automatic, small arms and mortar bombs on the intervening night of August 13 and 14.

On August 13, Pakistani troops had resorted to firing by small arms and automatic weapons on forward posts along LoC in Bhimbher Gali sector of Poonch district, in which one jawan was injured.

There were four ceasefire violations in three sectors of Krishnagati, Bhimbhergali and Pallanwala in Poonch, Rajouri and Jammu districts on the intervening night of August 12-13.

Last month, there were 19 ceasefire violations in which four persons, including three jawans, were killed and 14 others injured.

Pakistan violated the ceasefire 192 times along the International Border in Jammu and Kashmir till July 26, government had toldLok Sabha.