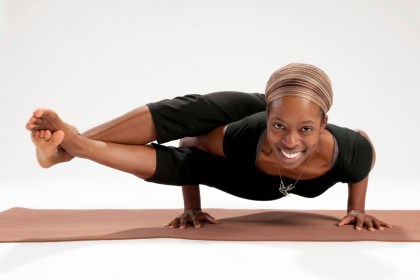 Yoga has been a tool of humanity for thousands of years, some say originally coming from Kemet, while others say India. Nonetheless it has been working miracles on people’s health, peace of mind and flexibility for millenniums.

Jean Marie Moore and Katrina LaShea recently opened a yoga studio called Anasa in the Laurel District of East Oakland. Their original goal was to wake Black people up to the health benefits of yoga, so they built it smack-dab in a retail area within Oakland’s Black community. They offer all kinds of classes including yoga, Tai Chi, Qi Gong – for beginners as well as experienced practitioners. You could check them out online atAnasaOakland.com. You could read Katrina and Jean Marie’s own words in this exclusive QandA …

Tia Ukpe-Wallace, who teaches workshops at Anasa Yoga, is shown in an advanced yoga pose, astavakrasan, which demands a strong core, preventing and managinglower back pain.

M.O.I. JR: Can you talk a little bit about the history of yoga, and where it comes from?

Jean-Marie: Our training is derived from the yoga which has roots from India. Historically, it is said that the practice of yoga goes back to at least 3,000 B.C. However, physical evidence is incomplete for supporting this claim, and the yoga of that era would have looked very different from what we practice today in the West.

The yoga we practice today came from India to the West in 1893 during the Parliament of theWorld’s Religions at the Chicago World’s Exposition. There, Swami Vivekananda amazed the crowd with a brief speech representing India and Hinduism beginning with these words, “Sisters and brothers of America!” at which he received a 2-minute standing ovation from the crowd of 7,000.

From then on, yoga gained popularity as several traditions, or schools of thought, evolved. At first the Western focus was on meditation, pranayama (breath work) and positive thinking. After the 1920s, the physical practice of holding postures (asanas) was re-emphasized in the West as a means of calming the mind, strengthening the body and enlightening the spirit.

The original intention of an asana yoga practice is to calm the mind and body in preparation for seated meditation. And, while in meditation, to reach a transformative, higher state of consciousness in order to feel the connection to one’s higher power, or sense of being, and connection to all others – a true state of bliss.

The word “yoga” loosely translates from Sanskrit (the ancient language of India) meaning “to yoke, bind or join.” It is a uniting practice on many levels – of breath and movement (physical), mind and body (mental), your understanding of God and mankind (spiritual).

Both Hinduism and Buddhism share roots from the traditions of yoga. However, yoga as practiced in the West is typically compatible with all religious and spiritual beliefs. From a spiritual perspective, most yoga studios, including Anasa Yoga, focus on helping students experience a calming or energizing experience in which they are more open to the connection to their own beliefs and ideals.

Jean Marie: I started yoga in 2004 to cope with stress from work and some difficult family situations. The first class I went to was at a fitness/health club. I lucked out and experienced a fast-paced class that left me totally relaxed and with a feeling that I could regain control over my life. It was exactly what I needed at the time.

The word “yoga” loosely translates from Sanskrit (the ancient language of India) meaning “to yoke, bind or join.” It is a uniting practice on many levels – of breath and movement (physical), mind and body (mental), your understanding of God and mankind (spiritual).

I continued to practice and shortly later I realized I wanted to learn to teach yoga in hopes of sharing this healing tool with others. Then, in the middle of my first 200-hour teacher training to become a yoga teacher, I broke my ankle and injured my back at the same time. After two surgeries, I received physical therapy but found that yoga was the key to realigning my broken body.

I signed up for another 200-hour

based on the principles of BKS Iyengar, who practices a slower system of yoga focused on physiological healing through the use of breathwork, body awareness and the optimum body alignment for each person.

I still have the potential to get stressed out with my day job as a construction manager. But I use yoga as a tool for staying grounded and calm in just about every situation. Right now I’m not teaching at the studio but hope to settle down into a teaching slot in the near future.

Katrina: I injured my back in a dance class. I was bedridden for a period and when I was able to get out of bed, I was unable to lift my leg high enough for my foot to clear a street curb without excruciating pain. After a period of weeks, I was finally able to go back to class; however, in my mind I felt the injury was due to my lack of flexibility, so I enrolled in a yoga class at The Yoga Room in Berkeley.

The injury was actually due to ballistic stretching in a dance class back in the mid-80s, a no-no today. Over the years, yoga was always something I went back to when I was injured in some way, whether it was my back flaring up, a heartache, broken foot, recovering from surgery or dealing with repetitive stress injury.

I reached a point in my life that I wanted an enjoyable activity I could do for the rest of my life. I was always going back to yoga when I was hurting or in pain, so I figured why not study it further since I enjoyed it and it made me feel better. Yoga has been beneficial in helping me heal all aspects of my life and address the most stressful and challenging situations.

M.O.I. JR: What are the bodily benefits to doing yoga? What are some of the health benefits? What kind of ailments does yoga ease?

Katrina: Yoga has many scientifically proven benefits for the health of our bodies, minds and souls. It is now considered an alternative or complimentary form of medicine. Many hospitals “prescribe” yoga classes, andinsurance companies provide referrals. 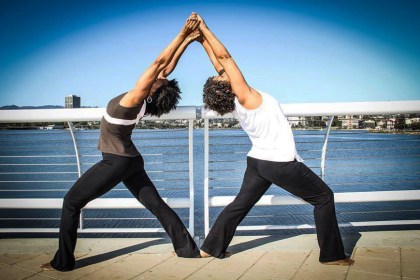 The practice of breath awareness, and moving through and holding the physical postures creates positive changes in our fitness, wellness, mental and emotional health, and it aids in disease prevention. As with any exercise or movement program, people should check with their health care provider for more information before beginning a practice.

The physical exercises are a series of slow, gentle and painless stretching and balancing asana that may gradually increase in complexity as the student becomes stronger and more flexible. These poses are accompanied by deep, steady breathing that soothes the nervous system, improves blood circulation and, it is said, helps the energy, “prana” flow through the body.

In addition, each practice ends with a few minutes of deep relaxation – typically lying on your back – to bring a sense of well-being. The combination of all these elements leads to a calm, focused state of mind and an increased sense of well-being, energy, strength and flexibility.

The practice of breath awareness, and moving through and holding the physical postures creates positive changes in our fitness, wellness, mental and emotional health, and it aids in disease prevention.

Jean Marie: The series of yoga poses called asanas work by safely stretching your muscles. This releases the lactic acid that builds up with lack of muscle use and causes stiffness, tension, pain and fatigue. In addition, yoga increases the range of motion in joints. It may also increase lubrication in the joints.

The outcome is a sense of ease, improved flexibility and fluidity throughout your body. Bodily benefits include improved posture and body image, core strength, weight control, self-esteem, balance, discipline, focus and concentration.

Yoga works by turning off the sympathetic nervous system – your flight or fight response state-of-being, in the stressed-out mode – and restoring the body to its base levels of the parasympathetic nervous system – your relaxation response – through mindful breathing. Just one one-hour class can lower your heart rate and blood pressure, allowing beneficial blood flow to the digestive and reproductive organs and the endocrine and lymphatic systems.

Some of the other ailments that yoga can ease include anxiety, depression and insomnia.

M.O.I. JR: When did you decide that you all wanted to open a spot dedicated to yoga?

Katrina: We first met in early 2011 from a mutual yogini, Crystal McCreary. Although numbers are growing, there aren’t many African Americans in your typical studio, so we usually reach out to each other in public classes. That’s how we all met.

Crystal is an advanced practitioner and a yoga teacher too. Coincidentally, all 3 of us shared the same vision of opening a yoga studio and providing yoga and other wellness classes with a focus on healing the African American community that is disproportionately plagued by stress-related diseases. We knew yoga could help.

We’ve always wanted our studio to be diverse and inclusive. But we knew it was more likely that people of color would come to Anasa once they saw people like themselves operating the studio. We formed our LLC in June of 2011, worked on our business plan for a year and a half, and looked at locations all over Oakland from West Oakland, to Uptown, to deep East Oakland. 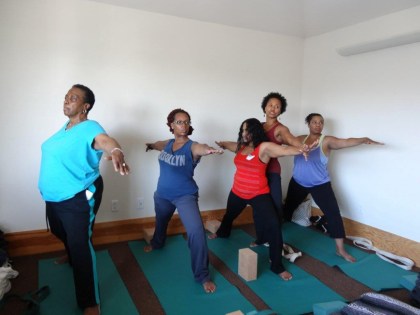 Katrina teaches a free yoga class at the Be Still Retreat, a quarterly event sponsored by the Black Women’s Media Project. Their mission is to spread awareness about the role the media plays in contributing to substance abuse problems among Black women. Over 100 women attend these retreats at Jack London Aquatic Center.

Then Crystal left the company in June of 2012 for an incredible job opportunity in New York. We regrouped and continued to search for a studio home with a focus on finding a spot where no other yoga studio existed. And one that was easily accessible and centrally located in the City. We found it all in the Laurel District.

We have two beautiful studios and are the only green-certified yoga studio in Alameda County – an important feature for the health of our community, students and teachers. Our tagline, “Yoga. Health. Community,” really sums it up: Our goal is to improve the health of our community by offering great yoga, plus other wellness classes and events, in a lovely, green-certified space.

Our goal is to improve the health of our community by offering great yoga, plus other wellness classes and events, in a lovely, green-certified space.

M.O.I. JR: What kinds of classes do you offer at Anasa Oakland? Who are some of the Black instructors?

Jean Marie: We offer 60-, 75- and 90-minute yoga classes for beginning to experienced practitioners. Classes are held in the mornings and evenings seven days a week. Some classes include music; others do not. We also offer other modalities of wellness classes, including Tai Chi, Qi Gong and Feldenkrais.

We keep Saturday afternoons open for special two-three-hour workshops such as Intro to Yoga for Men, Keeping Your Knees Healthy, and Building a Home Practice. We have some donation-based classes and occasional free classes, such as our annual “Day of Service” on Martin Luther King’s birthday, with free classes to the community on the holiday.

Katrina: Anasa has an important dual meaning to us. It is said to mean “indestructible” in the ancient Indian language of Sanskrit. And it translates as “comfort” or “joy” from the African language of Swahili. We take it to mean indestructible joy, the essence of yoga. The name “Anasa” blends our two worlds of being from African ancestry and the healing practice of yoga from India that has sustained and healed millions of people worldwide, including both of us.