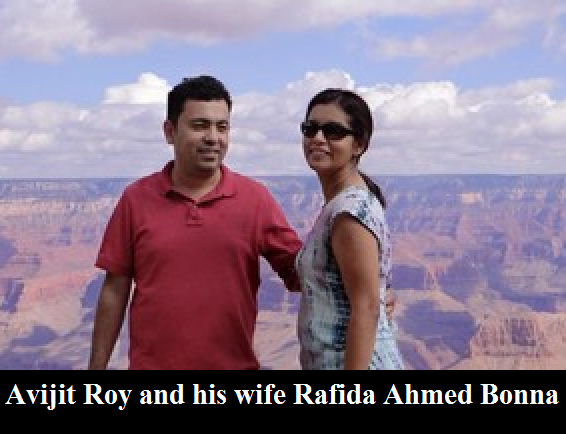 Avijit, son of former DU teacher Dr Ajay Roy and also the founder of Mukto-mona Blog, and his wife have been admitted to Dhaka Medical College Hospital in critical condition immediately after the attack.

Bonna told the Dhaka Tribune: “The miscreants attacked us with cleaver around 8:45pm.”

Witnesses said some unidentified miscreants swooped on the bloggers and hacked them mercilessly between 8:30pm and 9pm while they were returning from the book fair, leaving them critically injured.

OC Sirajul said: “We do not have any clear idea about the attackers. But, the police is suspecting that those, who attacked Humayun Azad, might be behind this as the attacking style suggested similarity.” 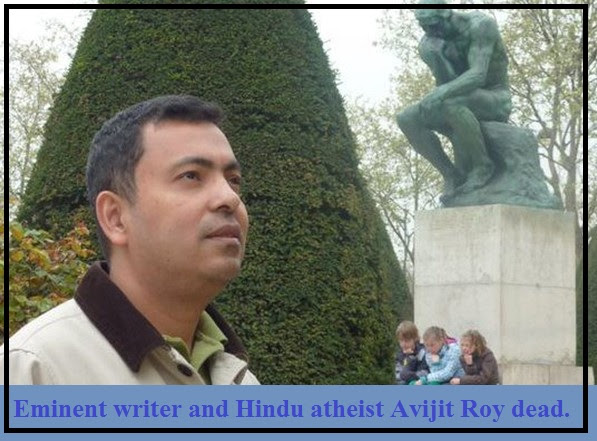 On February 27, 2004, professor Humayun Azad was attacked on the way back from book fair, in the following August he died in Germany.

Miscreants also exploded two crude bombs outside of the DMCH around 11:30pm, immediately after the news spread in the city.

A group of people have staged a protest in front of the DMCH, protesting the killing.

DU Proctor Amjad Ali said: “I came to know the writer had been receiving threats from militants because of his anti-communal activism.”

Among the teachers of Dhaka University who rushed to Dhaka Medical College hospital hearing the news of the attack, were Professor Dr Abul Barkat, Professor Anwar Hossain.

Professor Anwar Hossain said the those, who are against the country’s liberation, democracy, free thoughts and attacked Humayun Azad, have perpetrated this.

Liton Nandi, Dhaka University Chhatra Union president, told the Dhaka Tribune they were set to bring a torch procession, protesting the attack and killing in a short time.

Earlier in 2014, online bookstore Rokomari.com stopped selling books by the well-known writer after an Islamic militant issued death threats on Facebook to the website’s owner.

The decision to withdraw his books was prompted by death threats posted to Facebook by Farabi Shafiur Rahman, an Islamist extremist allegedly linked to Jamaat-e-Islami.

In his Facebook post, Farabi specified the office address of Rokomari.com and called upon his “Islamist friends” in the adjacent locality to attack.

He also told Sohag that he would suffer the same fate as Ahmed Rajib Haider, a popular blogger known by the psuedonym Thaba Baba, who was hacked to death last year by machete-wielding Islamic militants. 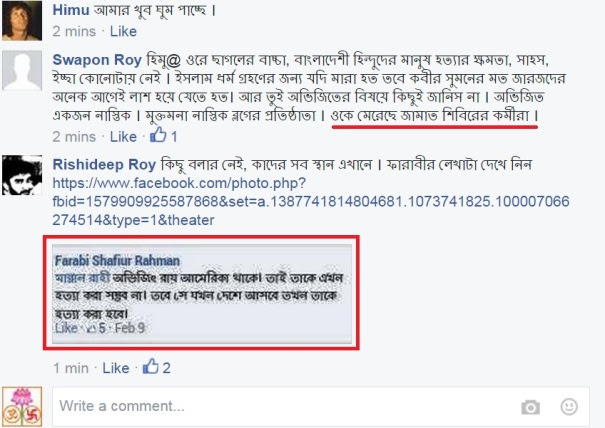 Avijit was threatened by suspected Islamists.

Avijit, a Bangladesh-born engineer, who was living in the United States, rose to prominence with his books on philosophy, scientific thought and human rights issues.

Avijit and his wife came to Bangladesh to attend the book fair as two of his books came out in the fair.

Avijit was under the target of the fundamentalists as he has been continuing his literary war against the Radicalism in Bangladesh and he also under the scanner of the Muslim fanatics as he married a Muslim girl. Rafida Ahmed Bonna, his wife was targeted as she was always supporting his husband, Avijit for his  belief on atheism.

Born in a reputed Hindu family, Avijit reached to a destination of  atheism in his turbulent youth.

Awami League, the so called secular and ruling party in Bangladesh  is completely failure to protect the minorities and the free thinkers in Bangladesh right now.

Radical Islam is growing there with all its barbaric crudeness and fanaticism. Sources say that Jamaat and BNP may be behind this horror killing.