(CNN)A Hindu priest was hacked to death at his temple in Bangladesh’s southwestern district of Jhenaidah early Friday, police said.

It is the latest incident in a wave of suspected religious-based murders, despite a nationwide crackdown by the Bangladeshi government, including the arrest of more than 14,000 people.
The victim was Shyamananda Das, a 52-year-old priest.
He was gathering flowers, likely to be offered in prayers at the Sri Sri Radha Madan Gopal Bigrohomot temple, when the attack took place, Gopinath Kanjilal, Assistant Superintendent of Police of Jhenaidah district, Sador circle told CNN.
“Three men rode up on one bicycle. They were wearing helmets. They jumped off, attacked the priest, and then rushed away,” Kanjilal said, citing one witness account.
Is Bangladesh the next ISIS hotspot?
The alleged killers used what is locally known as “chapatti”— a long, heavy knife that is often described as a machete.
Kanjilal added that the attack is similar to others in a long, ongoing spate of murders across Bangladesh that’s taken the lives of secular bloggers, academics, as well as religious minorities.
Key suspect in blogger Avijit Roy’s murder ‘killed in gunfight’
The government launched an anti-militant drive across the Muslim-majority nation last month to stamp out the murders, but many of those detained are believed to be ordinary criminals and not Islamic extremists. 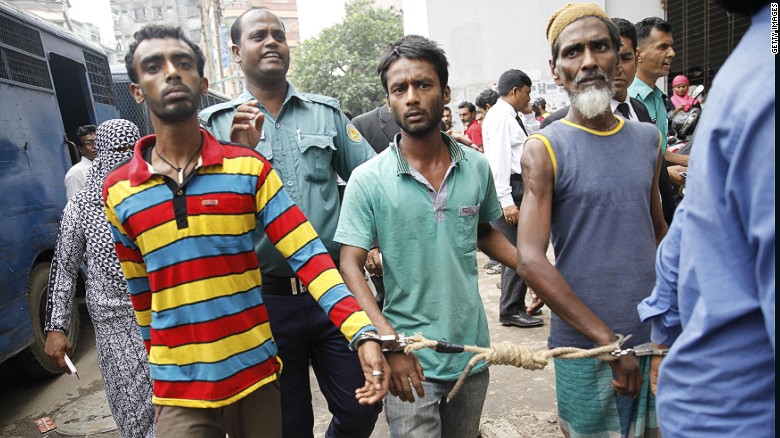 Photo:
Bangladeshi police escort arrested men in Dhaka on June 12, 2016. Over 14,000 people, including suspected ordinary criminals, have been detained after police launched a controversial anti-militant drive across the Muslim-majority nation following a spate of gruesome murders.
On June 7, Anando Gopal Ganguly, 70, was on his way to his temple when he was hacked to death.
ISIS claimed responsibility for the murder shortly after. The terror group issued a worldwide call to arms during the holy Muslim month of Ramadan.
However, Bangladeshi authorities have long denied the presence of the terror group in the country.
Top counter-terror officer’s wife slain in Bangladesh
Kanjilal told CNN Friday that he thought Anando Gopal Ganguly’s murder was orchestrated by the Islami Chattra Shibir (ICS), a student wing of Islamist political party Jamaat-e-Islami Bangladesh.
There has been no formal claim of responsibility in the hacking death of Shyamananda Das.
Source: CNN