Ploy of Bengaluru police to arrest VHP leader in Belgavi in the absence of warrant, was foiled 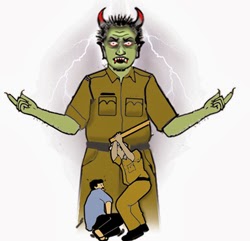 Belgavi (Karnataka) : Shri. Gopal Bhat, a leader of Vishwa Hindu Parishada (VHP) was having discussions with members of the organization in Shastrinagar area. Bengaluru police reached there during this and took him into custody for interrogation. Police initially told Shri. Bhat that he was being taken to local police station for inquiry; but when the vehicle taking him was diverted to road leading to Bangaluru, VHP activists had a doubt and they asked police to stop the vehicle and asked them for arrest warrant; but police didn’t have it. (Deception by police ! Several Sanatan seekers have experienced such falsehood of police during past few years. Police, who are misusing laws for harassing and exploiting citizens, will be asked to undertake rigorous spiritual practice for whole life, in Hindu Rashtra ! – Editor, Dainik Sanatan Prabhat)

VHP members blocked the road for an hour; therefore, police took Shri. Bhat to the office of local Police Commissioner, where BJP’s MP Suresh Angadi also reached. He asked how could they make such arrest, without informing local police? Bengaluru police replied that a case has been filed against Shri. Bhat at Bengaluru and they had come to conduct inquiry into the same. (If police came for inquiry, why were they taking him to Bengaluru ? Police expect cooperation from local citizens on all their programs; but if they indulged in such falsehood, how will citizens believe in them and cooperate ? If such police are caught by fanatics, will Hindus go for their rescue ? – Editor, Dainik Sanatan Prabhat)

Shri. Gopal Bhat has been accused of telecasting VCD of Dr. Pravin Togadia in the recently held huge Hindu gathering at Bengaluru despite ban imposed by police. (Will police take similar action in case of non-Hindus ? – Editor, Dainik Sanatan Prabhat)