Shriram Sena activists submitting a representation to the District Collector Shri. Ramakant Konduskar said while addressing the demonstrators and reporters that Amir Khan is a pro-Muslim person and has connections with terrorists; therefore, he could dare to commit such anti-Hindu act. Shri. Konduskar made an appeal to managers of theatres in Belgaum to stop screening film ‘PK’ and warned that if they did not follow the advice, Sriram Sena would stop shows of the film in its own way and the local Administration would be responsible for the same. IMAGES OF THE FIR AND ITS RECEIPT : Activists from Shiv Sena, Sher-e-Punjab, burn a poster
against the film ‘PK’ outside a cinema in Amritsar. AFP

Holding protests against the Aamir Khan-starrer ‘PK’ outside local cinema halls, Suncity and MG Club, activists of Bajrang Dal and Vishwa Hindu Parishad (VHP) did not allow the screening of the movie on Tuesday.

The protesters torched posters of the film and raised slogans demanding ban on the movie. Anil Goyal, a VHP worker, said the film had hurt the religious feelings of Hindus.

Silchar (Assam) : On, Bajrang Dal and other Hindu fundamentalist groups on Tuesday, the 30th of December vandalised and stopped screening of the Aamir Khan-starrer ‘PK’ in two cinema halls here for allegedly hurting the majority community’s sentiment. Police said they have arrested three activists of Bajrang Dal, who stormed ‘Gold’ and ‘Oriental Talkies’ in Silchar.

“The activists came while the show was going on. They shouted slogans against Khan and the film. Without saying anything, they suddenly started damaging the property like tearing the poster of the film, smashing window panes and breaking ticket counters,” one of the owners of the two halls said on condition of anonymity.

“We have stopped today’s screening. For tomorrow, I cannot say it now. Everything will depend on the situation,” the owner said. When contacted, a Bajrang Dal activist said they would “not tolerate any derogatory message for the Hindu gods in the film”.
On Monday, Bajrang Dal activists vandalised theatres in Gujarat exhibiting ‘PK’ for making “fun” of Hindu Gods and godmen, besides staging protests and tearing posters in Agra and Mau in Uttar Pradesh and Bhopal in Madhya Pradesh.

There were reports that one theatre in south Mumbai’s Parel had stopped screening of the film.

Bhubaneswar (Odisha) : The Bajrang Dal 30th December, Tuesday protested at various cinema halls in this Odisha capital and demanded a ban on Aamir Khan’s movie ‘PK’, saying it was against religious sentiments of Hindus.

Activists vandalised a cinema hall for screening the movie that shows godmen misusing religion for personal gain. They also burnt posters and banners of the film.

“The film has dishonoured the Hindu religion and ridiculed gods and goddesses. The film was financed from Dubai and Pakistan. It’s a conspiracy to undermine the Hindu religion. It should be banned immediately,” Bhupesh Nayak, Bhubaneswar district coordinator of the Bajrang Dal, told reporters.

Following the vandalism, cinema halls filed police complaints against the people involved in the act.

“After receiving complaints, we have deployed security personnel at the cinema halls to maintain law and order,” Bhubaneswar Police Commissioner R.K. Sharma said. 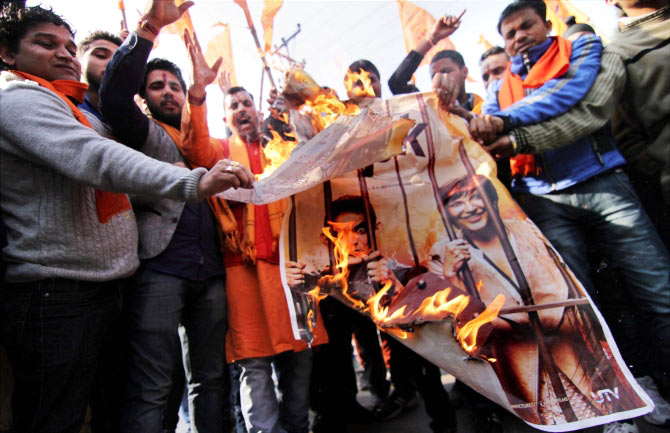 Led by Bajrang Dal coordinator Rakesh Kumar, over 150 activists of the Jammu unit of the organisation today (29th December) held a demonstration against the film for showing “objectionable” scenes about gods and goddesses of the Hindu religion. 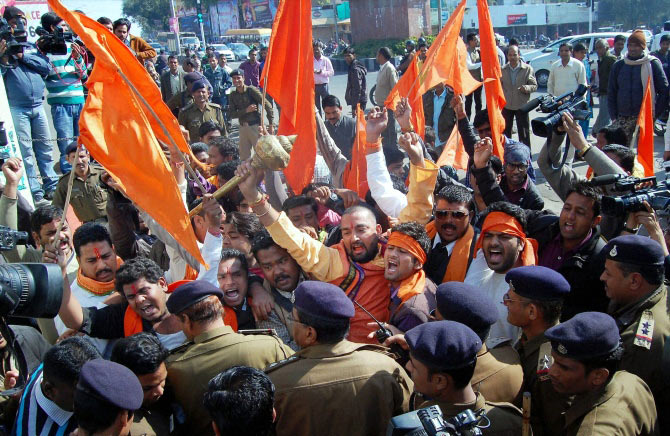 The protesters shouted slogans against the film and demanded that the District Magistrate ban its screening here.
The activists alleged that the film had several scenes that “denigrated” Hindu deities and hurt religious sentiments of the people.

“There are some scenes in the film which are objectionable and hurts the sentiments of crores of Hindus. We cannot tolerate this,” Rakesh said.

Bajrang Dal demands a ban on the screening of the film in Jammu, he said, adding that the organisation has held demonstrations across the country against the film.

The film that was released on December 19 takes a swipe at organised religion and godmen. Bajrang Dal activists protest against the screening of ‘PK’ at
Jyoti Talkies in Bhopal on Monday. (Bidesh Manna/HT photo)

Protests by Bajrang Dal activists against Aamir Khan blockbuster ‘PK’ spread to more places today even as a saddened Rajkumar Hirani, the film’s director, rejected allegations that it was disrespectful to Hinduism and said it upheld the true spirit of religion.

Activists of right-wing outfits Bajrang Dal and Hindu Sena staged a protest outside a cinema hall in Central Delhi, demanding a ban on the film for allegedly hurting religious sentiments.

The demonstrators also burned posters of the movie, which takes a swipe at organised religion and godmen, and demanded that an FIR be registered against its makers and the star cast.

“Some agitators staged a protest outside Delite cinema. They were detained and taken to the nearby police station,” said a senior police official.

Protesters also raised slogans against the movie demanding ban on its screening across the country.

In Uttar Pradesh, the activists of Hindu Yuva Vahini entered the premises of ‘Prasad Talkies’ in Bareilly, tore posters of the film, forced the theatre officials to cancel the show besides burning the effigy of Aamir Khan.

In a statement, Hirani, 52 , said he had no intention to hurt anyone’s sentiments and maintained that the Aamir Khan-starrer upholds the true spirit of religion while condemning “only the abuse” of it.

“I’m deeply saddened and concerned about the protests by some groups against our film ‘PK’. On behalf of the entire team of ‘PK’, I would like to clarify that we respect all religions and faiths,” he said.

“Our film is inspired by the ideas of Sant Kabir and Mahatma Gandhi. It is a film, which brings to fore the thought that all humans who inhabit this planet are the same. There are no differences,” he said

He appealed to the protesting groups to see the film in totality and not just isolated scenes. “Our intention is not to hurt anyone, or to discriminate against any religion. I would once again like to assure them that I have the highest regard towards all religions, and that we respect all religions and faiths.”

The film, which was released across the country on December 19, has already earned Rs 246.32 crore at the Indian box office.

In an escalation of protests yesterday, Bajrang Dal activists vandalised theatres in Ahmedabad and other cities in Gujarat exhibiting the film and warned that its screening be stopped.

Besides Gujarat, the right wing activists also staged protests in Agra and Mau in Uttar Pradesh and Bhopal in Madhya Pradesh and tore posters of the film. One theatre in south Mumbai’s Parel had stopped screening of the film.

Meanwhile, Congress condemned the vandalism by right wing activisits and charged that the BJP government was “complicit in its silence”.

“Condemn acts of vandalism by Bajrang Dal and other fringe elements against movie PK. Would (PM Narendra) Modi ask CM Gujarat to act against Hooligans?

“Or at least condemn it on his Twitter ? No he won’t because he believes in what his Hooligan Bajrang Dal Gang is doing. Ugly face of Fascism,” party general secretary Digvijay Singh tweeted.

“The BJP govt is complicit in its silence. Why are advocates of free speech silent?,” he tweeted.

Yoga guru Ramdev said that tradition and faith of people should not be hurt.

“The film PK, as people have told me, has two things. One, it contains objectionable scenes of Hindu Gods and Goddesses, which is not right.

“But secondly, it has exposed those people who misuse the name of God for their personal profit and call themselves as God. However, the tradition and faith of people should not be hurt.” Ramdev said.

Sri Ram Sena also demanded that the movie be banned.

“The movie PK hurts the sentiments of Hindus and we protest it. Indian government should ban it,” Pramod Muthalik, the Sena leader said.

Alleged Bajrang Dal activists on Monday vandalized prominent theatres in Ahmedabad, unhappy with the Aamir Khan-starrer ‘PK’ and demanding a ban on the film. The activists were caught on camera damaging theatres in the city, Times Now reported. Protests were also held in Bhopal over the film and some screenings were halted.

At least 20 members of the right-wing organization, led by city unit chief Jwalit Mehta, targeted City Gold and Shiv theatres on Ashram Road in Ahmedabad and smashed ticket windows and tore off posters of the film, PTI reported. Policemen from Navrangpura station along with deputy commissioner of police (sone-1) Virendrasinh Yadav rushed to the spot, but the attackers had fled before that. The police said. “We are yet to identify the persons behind these attacks, which took place around 10 am. We learnt that miscreants vandalized the ticket windows of both these theatres. We are now collecting CCTV footages to identify the persons,” said Yadav. However, Bajrang Dal owned up to the attack and warned other theatres screening the film. “Around 15 to 20 of our members today went to these theatres, which are screening Aamir’s film ‘PK’. I am warning other theatres to stop the screening, otherwise we will intensify our protest in the city in the coming days,” said Mehta, a Bajrang Dal member.

“If his intention was right, then why did the movie not showcase anything about his own religion? Yesterday, I called majority of theatre owners and asked them to stop the screening. But they indirectly refused,” said Mehta. Members of the right-wing organization allege that the filmPK had several scenes that denigrated Hindu deities and hurt religious sentiments of the people.

“The romantic track between Anushka Sharma (shown as an Indian girl) and Sushant Singh Rajput (a Pakistani boy) is also being seen as promoting love jihad,” said Dharmendra Asoliya, a member of the Bajrang Dal.

“The film’s protagonist ‘PK’ points out to strange customs that each religion is associated with. And while he takes on every prominent religion in the country — Hinduism, Islam and Christianity — some people believe that taking on a Hindu godman in the film is a direct insult to the community.

Several Hindu outfits have demanded a ban on the film for allegedly hurting religious sentiments. The Aamir Khan-starrer, which was released on December 19, has opened to rave reviews and received a great response at the box-office with the film revenue exceeding over Rs 200 crore across the country in the first week of its release.

According to a PTI report, two dozen Bajrang Dal activists wielding batons and iron rods vandalised theatres that were screening Aamir Khan’s ‘PK’ in Bhopal. The report further stated that glass planes at ticket windows were smashed and posters were torn down at the City Gold Multiplex and Shiv theatre on Ashram Road in Bhopal.

Aamir Khan’s PK has also invited the ire of yoga guru Baba Ramdev who has called for a social boycott of those involved in the making of the film, on December 28, as it has criticised Hindu gods and goddesses, reports economictimes.indiatimes.com.

Interestingly, a Hindustan Times stated that Censor Board will not be cutting any scenes from the film. It also quoted ?Leela Samson, chairperson of the Central Board of Film Certification, saying that there are bound to be different opinions and those who don’t agree can ignore it.

However, the troubles for the film don’t seem to end. BJP politician Subramanian Swamy on micro blogging site Twitter questioned how the film was financed.

Source : The Times of India