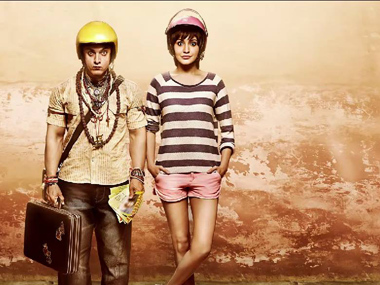 I am a practicing Hindu. I have been educated in English medium and have pursued science as a matter of personal interest. I would like to think that I am a rational human being, plugged into the modern world. And finally I would like to think I have a mind open enough to allow pertinent questions raised about my belief systems, and strong enough to remain unperturbed on issues that try to dent my convictions; convictions borne out of my own experience, understanding, scholarship, openness and, I dare say, wisdom.

So, as I watched the latest Aamir Khan starrer PK, I distinctly remember feeling consternation and indignation. At the same time, I also felt dismay and disdain.

“The world shall always ridicule the stupid. Why are you stupid? Why are you weak? Why have you failed to build your faith on the solid bedrock of spiritual insight and practice? People prefer magic to effort towards spiritual evolution just as people prefer a lottery win to enterprise. Such people deserve to be slapped about by all and sundry.” Such, and other thoughts, gushed through me as I watched the film. Expectedly, the fringe hue and cry over PK is getting bigger, if not with understanding of core issues, then out of a herd mentality and an expression of solidarity. Also, they hope to win through the power of numbers. But will that really be a win?

There are archetypes and stereotypes. There are superheroes and the invincible. There are caricatures and over-the-top villains. Funnily enough there are stereotypes of every shade of gray in-between. And these are the tools that we employ to tell stories and to convey messages. From Ved Vyas to the Buddha, from Shakespeare to Bollywood, storytellers have employed these devices. So, Shakespeare uses ‘a Jew’, and Bollywood has employed stereotypes of ‘a Madrasi’, ‘a Marwari moneylender’, ‘an evil Saas’, and so many others.

But the storyteller also mesmerises, and can hence skew public opinion in favour of A or B as he wishes, or at least hopes to. Which is why, in the Aamir Khan starrer Fanaa, attempts were made to make the audience empathise with a hard-core terrorist simply on the basis of his having a love-story with a young blind girl. This was achieved through an ample sprinkling of romantic scenes and feel-good songs that the public laps up. At the end of the movie, a majority of the audience was not interested in the broader message of the movie, and yet the protagonist – a terrorist – still remained ‘a hero’.

Let us admit it, Bollywood has huge influence over the national consciousness. That is the reason a few years ago when I came out of a theatre after watching the very violent Ghajini, another Aamir Khan starrer, I was scared! I was scared that –
a) Criminals rule the roost and any ordinary citizen can become a victim at any time; and
b) unless a person survives by divine intervention from the attack and then goes on to acquire superhuman abilities, he can do nothing about the assault and injustice; and
c) there is no rule of law. Imagine the effect of that movie on the collective consciousness of the country. But, this is not about Aamir Khan.

Admittedly, there are two sides to this value argument :
a) movies in India do affect the collective consciousness of people and hence play the part of a major force for social evolution, and
b) movies are meant for entertainment; creative expression, poetic license and humour convert many things into the acceptable, and it is up to the wisdom of the audience to take what they want from it and reject the rest.

So what is wrong with the movie PK? Well, for starters, it resorts to using an alien simpleton with magical powers to deride – guess who? – simpleton faithfuls being suckered by a most blatantly conning godman. Secondly, and perhaps more importantly, it uses the most blatantly conning godman to deride people’s matters of faith not just relating directly to that godman, but everything else associated with the religious practices of a faith that the godman also seemingly belongs to.

This is important to put in perspective : the caricatured godman is not being bashed here; he is only the tool. Symbolisms, pictures and images, idols, anthropomorphic gods, feeding of cows, temple-going, placing faith on rustic shrines, endowments, gurus, penances, rituals, nothing is spared.

Again, let us be clear : For the audience, the message that the godman is a fake and a con artist is clear in the very first frame. Not even the most vulnerable and superstitious would have any doubts about that. For a large part of the rest of the movie it is all about making everything associated with religious practices look farcical and ridiculous through superficial observation, meaningless extrapolation and carefully designed ploys.

And all this is justified because the protagonist happens to be a childlike alien and does not need to take a deeper look into the epistemology, thoughts and feelings behind these practices. For some degree of political correctness, and also as a feeble defence of secularist agenda, some other religions also get passing mention. However, and without a doubt, the target religion remains Hinduism.

It so happens, that a large portion of the population is not really religious. It mostly happens to have a religion by virtue of being born into it. However, an equally large portion of the population is perfectly happy to let religious symbolism and practices remain sacred for the practitioners. It is this large, perhaps agnostic, population that this movie affects deeply. This it achieves by showing the superstitious and faithful in bad light.

There have been, and are, fake, miracle-vending, self-aggrandising godmen in India (and in the world, in all religions). There are also spiritual leaders and teachers. There are yoga and meditation preceptors. There are heads of religious centres. There have been celebrated saintly reformers and spiritual beacons like Swami Vivekananda and Maharshi Aurobindo. There are new-age gurus of all hues, from the utterly pedantic to the overtly elitist. There are also millions of ascetics, monks, seekers and seers who descend on the Kumbh mela from their retreats every year. Sooner or later, the fake conmen are exposed and ridiculed, even reprimanded. Sooner or later, the stalwarts get celebrated, studied and followed. And more often than not, the renunciates have been left alone to their devices. There exists a self-cleansing and balancing mechanism in society. A movie like PK does nothing path breaking in this regard.

What it does achieve is attack the very foundations of religious practices from outside, without so much as getting into a rudimentary analysis, empathy, respect or understanding. In this manner, it should not be surprising that it evokes strong indignation in many quarters.

As a practicing Hindu, I have educated myself enough to know some of the core values and the associated practices. In the first place, it is not a religion in the Abrahamic meaning of the term, in that it has no single and final messenger of God and no single book. It considers all paths valid, including meditation, devotion, worship, service, knowledge, logic, rationalism, materialism, spirituality, atheism, agnosticism, polytheism, monotheism, paganism, dualism, non-dualism, and so on. It does not conquer, proselytize or destroy native cultures. It has its own approach to metaphysics, wisdom and aesthetic, and valuable at that, considering the rich heritage that it has gifted the world. It considers the entire creation as a sacred expression of the supreme truth, and is, therefore, very much in tune with modern concepts of environmental conservation. Many of its esoteric and exoteric practices can be explained within the realms of reason, or at least historicity. It can be as simple and superficial, or as complex and deep, as a practitioner chooses to view it, based on his inclination. It can evolve, it can reject, or it can add to itself organically.

As a person born and brought up in India, I am also aware that many Hindus are mired in superstition, shallowness, bigotry and hypocrisy; that practitioners often seek miracles and use it for commercial, social and political benefit more than for the establishment of a personal spiritual connect. Much of the same can be said about any religion, even in the modern times. However, this observation is not made in defence; rather this is a proud admission that Hinduism can evolve and so can its practitioners. Attacking and ridiculing the sacred is NOT one of the valid ways to do so.
By Pravin Singhania

We have no access to them to ask these questions,
but a reasonable guess would tell us that such things will not be allowed !!
Why then use imagery of Lord Shiva in toilets, cowering below the seats, and show in uncharacteristic ways ??
– a ‘firstpost’ readers coment